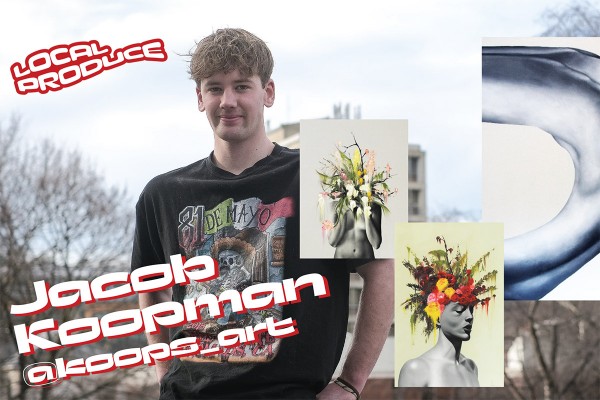 Jacob Koopman is one of the newest creatives emerging onto our local art scene. Jacob is currently blessing the eyes of many with his work, which blends realism and surrealism. Jacob is an artistic powerhouse who enjoys painting, usually while lying on the floor of his “poor-lit and mostly cold” flat.

Jacob got into art during high school, initially taking the subject alongside a few of his friends. Although he had been doing it as a hobby, Jacob’s passions began to grow stronger and stronger. He credits his Mum for pushing him to start displaying and selling his artwork in galleries. In fact, she once took two of his paintings (without permission) down to the Otago Art Society in the Train Station where they were displayed and got sold, netting Jacob a bit of cash. Jacob now does commissions for “mostly middle-aged mums,” as well as murals around Dunedin. He enjoys the process of painting because “it feels like building a project with each layer added on it.”

Jacob mainly focuses on realism and surrealism, but is gradually moving towards the latter because he is “getting bored of doing portraits.” He never really feels like his paintings are finished, and often has to stop himself from continuing to change them once the paint dries.

He is incredibly humble about his artwork and tends to keep a low profile. One of his mates didn’t even realize that Jacob’s art and personal Instagrams were maintained by the same person. He does consider himself an artist, as he told Critic “it’s like considering myself to be an adult, technically yes but also no.” Currently most of his art sells to middle-aged women but he has high aspirations that Kanye will one day own a Jacob Koopman original. More importantly however, he just wants people to be genuinely stoked about having one of his paintings. “It’s all about how they feel about it, I want people to enjoy them,” Jacob says.

Jacob is really into the messier abstract and surrealist art but is happy with his own style. He claims art is “like your personality: If you don’t like it, you’re doing it wrong.” Surprisingly, Jacob did not study art at Polytech. Instead he opted to pursue qualifications in graphic design. He did clarify that graphic design was “not” his passion. Jacob enjoys exploring other creative outlets, such as filmmaking and design. With these, he enjoys navigating his own way through the process without all the pressure of other people giving it letter grades. “Art is all subjective, so it doesn’t make much sense to be marking and judging it. It’s all just your perception of it” he said.

To avoid burnout and a creative block, Jacob switches between painting on canvas and murals, making sure to balance his art between his other hobbies, such as surfing, skateboarding and snowboarding.  However, painting does take up most of his time, with his last painting taking around two-and-a-half weeks of six-hour days. Painting for this long in a flat can be difficult as the light and temperature changes throughout the day, which controls how the paint dries. There is an optimal painting temperature, which Jacob reckons is when you can have “warm pants on while your hands are slightly cold — somewhere around a midday sunny winter Dunedin day with the window open.”

Ultimately, Jacob’s goal is to brighten up people's lives with paintings. He doesn’t think

that all pictures are worth 1,000 words and claims his are only worth “like ten, maybe four.” His next big upcoming art pieces are a mural, some personal commissions, and maybe a whale because he’s never tried painting a whale before.