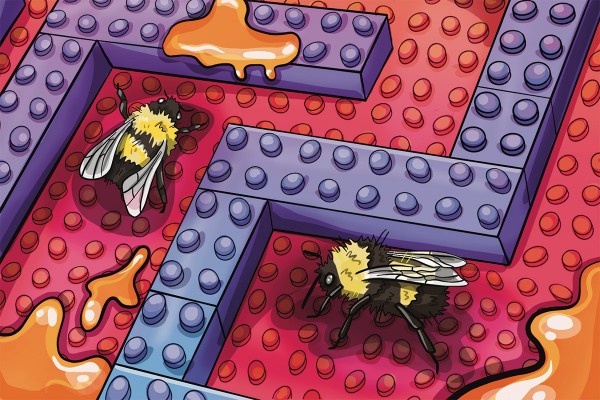 When you’re a teenager, you hide your questionable content beneath the bed. When you’re a university, you hide them on the roof. Here are some of the things lurking above you right now.

Do you love scrumptious diseases? Wish you could taste some tuberculosis? Gobble some gout? On top of the Micro building is a banquet of live pathogens, begging to be heisted for biological warfare.

The PC3 laboratory is a maximum security facility shipped from Europe to Otago and lifted by crane onto the roof, not unlike that one scene in HBO’s Chernobyl. It’s previously been used for growing TB but is now chockablock with Covid-19, with researchers studying and isolating its nucleic acid.

Don’t worry — the facility uses filters and negative pressure to prevent pathogens escaping, along with a daily ritual where the entrances are sprinkled with water blessed by Daddy Bloomfield himself.

Out of the scary things to have thrown at you, bees are definitely one of the worst. Zoology has a secret hive on the roof, where Dr. Paul Szyszka studies the brain waves of honey bees.

“Besides the honey bees, we have a glasshouse with bumblebees which solve Lego mazes on the roof,” Paul said. “But I don’t know whether this is so spectacular.”

Paul was wrong. It is the most spectacular thing ever. There was a slight bee leakage when I arrived, so Paul and I donned some beekeeper suits and nabbed the escapees, popping them back into their colonies. The bees are adorable, and brainy to boot.

Paul is testing whether bumblebees have an internal representation of their surroundings, which he describes as a mental Google map. In order to find their food, the bees traverse a labyrinth of Lego and tubes. As time goes on, novel pathways will open, and Paul will see whether or not they remember the right way.

Other experiments are going on as well, such as cross-association learning (seeing whether bumblebees can connect smells with colours). When the bee sees a certain colour, it approaches it and sticks out an adorable bee tongue, anticipating the associated reward.

Bumblebees are used more than honeybees, as the honeybees tend to get overwhelmed with anxiety and die, much like humans.

The Zoology department also sells the honey from its honeybees. The honeybees roam Dunedin and grab what they can, so Paul suspects it may or may not include puddles of spilled Coca Cola — a bonus if you ask me.

Pigeons are great at lots of things, like orthographic processing and pooing on the Robert Burns statue in the Octagon. Orthographic processing is the ability to understand and recognise writing conventions, like grammar, alongside recognising when words contain correct or incorrect spellings.

The super pigeons sit at a tiny pigeon-sized computer, pecking at four-letter words when they pop up on the screen. HELL, EVIL, LUST, they peck, eyes glowing red with wrath.

If the word is made-up, they peck at a symbol instead. Scrumptious seed is fed to them as a gluttonous reward. The pigeons at the moment can recognise up to 60 words, as well as 8000 non-words, and their vocabulary is ever growing. Soon they will be able to leave slurs in Reddit comments.

It’s a free-range pigeon penthouse, a luxury bachelor pad that the pigeons can enter or leave as they please. Be kind to any pigeons you see around campus. You’ll thank me later.

There are few sights more harrowing than a chode silhouetted against the full moon, quivering from atop a tower as students howl heavenwards. It’s no secret that Knox is deranged, and the tradition of forcing a naked man to scream on a roof is both awful and awe-inspiring. This honorary role is given to ‘the dog’, a fresher elected for having the shittest chat and highest alcohol consumption, a prime specimen of Otago culture.

And for legal purposes, this is a joke.

Richardson — The Dark Side of the Law

Rumour has it that the Richardson Building has a secret thirteenth floor, grouted with asbestos and the tears of Law students. This is where naughty students pay penance for their crimes.

Inside of the clocktower, hidden from the students, resides Bogdan. Bogdan is so ugly that he causes humans to chunder and shart their pants simultaneously upon seeing him. For the last 91 years he has faithfully squatted behind the clock face, pulling the ropes and producing the bongs which Otago students famously enjoy. The hermit lifestyle suits Bogdan well enough — he sustains himself on old cigarette butts and UniCol leftovers, blended up in a Nutribullet and served as gruel. Next time you hear a bong, smile and give him a little wave. Just don’t look directly at him. For your own sake.