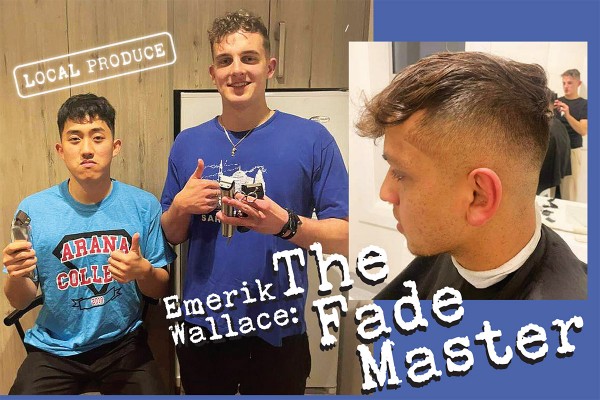 Emerik Wallace is a very chill guy, who loves cutting hair. He runs @fat_emz_cuts cutting hair on weekends for customers and a few mates. Alongside this, he studies physio right here at Otago.

Emerik started out cutting his own hair, he says. “I used to try to do short sides and fades and it was quite difficult. I managed to do it by holding a mirror in one hand and looking at a mirror behind me as well.” When his mates saw him they asked him to do them too.

A while after that, he went pro. “I started watching YouTube videos trying to learn how to do fades. I loved it. In second year I just kept on doing it for all my mates and then I bought some expensive clippers and started cutting randoms,” he said.

He had to upgrade after a while, he says. “I had these 20 dollar shitty ones from first year and second year. They started breaking down and people were giving me 10 dollars a cut at this point, so I was thinking, ‘I’m kind of serious, I might as well get some proper clippers.” His new ones are top of the line. “They’re the best ones I could find. They usually just sell them to barbers, but you can get them on Ebay, so these ones cost me like $350 with shipping and everything, but they’re really gorgeous.”

Financing them required a unique arrangement. “I made a deal with my mate that he would give me 150 dollars to go towards the new clippers if he gets free haircuts for life. I’m not complaining,” he says.

Emerik and his mates pushed the brand hard at first. “We just pulled up a chair at tent city and started handing out some business cards. It was funny though we weren’t supposed to be there and some guy kicked us out, but whatever, we handed out loads of business cards.”

Emerik has mixed reasons for doing it. At first it was a social thing. “I thought it was cool that my mates would just come up to me and I’d cut them and they’d actually look pretty cool. Some of the ones on Instagram are pretty awesome. I usually do it on Sunday morning because it's the only time I’m not busy.” But also he just loves cutting people’s hair.

He can do a few different styles but can’t do the full range just yet, but his skills are ever expanding thanks to YouTube tuts. “Don’t underestimate what you can learn on YouTube,” he says.

Girls’ hair also isn’t on at the moment he says. “I’ve been asked whether I do girls' hair a lot, but it’s quite different if you have to do a style. I know girls pay a lot of money so I wouldn’t underestimate it. We’ll eventually go into girls, I think there’s a bit of money there.”

He’s not keen to open up a studio just yet. “Maybe for just like a year or something but I’m happy with physio at the moment. But this is kind of fun on the side.”