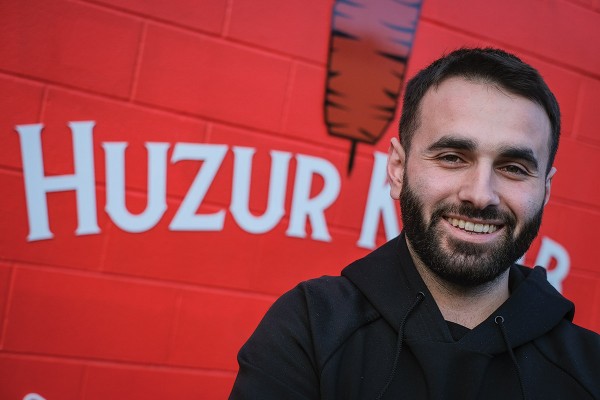 Huzur Kebab: Why have abs when you can have kebabs?

Huzur Kebab is the newest kebab place in town. They opened on June 12. Owned and run by Mustafa Boztas, Huzur is located just north of fatty lane. It has provided much-needed, late-night Turkish food north of the Octagon, and brings something to the table that fatty lane has always been lacking: Meat on chips.

Mustafa and his wife went to Turkey last year for a three-month holiday which ended up being extended to over a year because of COVID. He conceived of the idea for Huzur while in the two week quarantine at the New Zealand border. He said “quarantine was a good time to come up with ideas. Me and my wife put our minds together and brainstormed, and this came out of it. I did all my logos, designs and menus in quarantine.”

When he got out of quarantine, Mustafa quickly went about setting everything up. “As soon as I got to Dunedin I went to my lawyer and to my accountant to get everything rolling. Then after two months doing upgrades I opened up.” The old restaurant, Yilmaz, served food but still required a few upgrades. He said, “I saved a bit of money but it was still expensive. This whole setup is new apart from a few machines.”

His experience in the kebab industry mainly comes from what he has learned from his dad. Mustafa moved to NZ in 2009 but he says his dad has been working in Dunedin for 20 years. “My dad has been here since August 2000. He’s served a lot of students in his time. He used to work at Nesli and then Trojan, as you know, those are late nights. He served them all. I was brought up beside him and he basically taught me everything,” he said.

Mustafa thinks that kebabs offer something fast-food chains don’t, which is why they’re so popular with students. He said that “the kebab is really good when you eat it. Because of the carbs and the protein, the next morning you don’t feel hungover. It’s a good time and we provide healthy food. It's better than Maccas I suppose. You pay the same price at Maccas, and in two or three bites it’s gone. Whereas here you struggle to finish it. You take it home, wake up in the morning, and have some more.”

Three of the six sauces available are homemade, Mustafa said. “We make special, hot chilli, and garlic. The hot sauce is made with fresh chillies. It’s fully homemade, students keep telling me I should put it in a jug and sell it separately.” They also cater events like 21sts.

He says he likes to keep Huzur open for the stragglers on big nights. “We’re open 11-11 but on Thursday, Friday and Saturday we sometimes end up serving until 1 or 2 am for students. We get students from the Baaa and those that don’t make it to town. They come here straight away. Last Saturday I stayed open until three in the morning. People were glad they didn’t have to get a taxi to town.”

Mustafa says he is running a business but still loves the social side and giving back — “paying it forward” as he calls it. “We love serving people, and in this industry you meet a lot of nice people. It’s good. You need some human connection and who doesn’t love a kebab?”