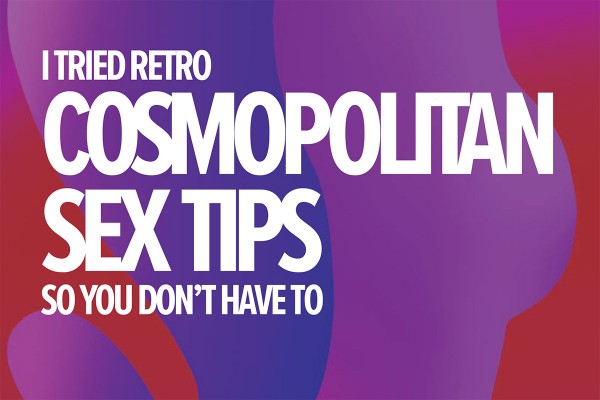 If there is one thing that all students can universally agree on, it’s that sex is one of life’s greatest pleasures and priorities. Sex can be fun and exciting, or icky and underwhelming. One source of information which has always offered a wide range of sex advice is the sex tips column in Cosmopolitian magazine. But do they actually work? Are they effective? Is it a placebo? Or is it just bad journalism? My questions and ‘thirst’ for investigation got the better of me. So I did it: I tried Cosmo’s sex tips so you don’t have to.

No, I would not recommend it.

According to Cosmopolitan, lying down on an ottoman (the type of bougie couch rich people have) and saying “I’ve been naughty and I need a spanking, Professor Wankerton” makes your partner aroused. I’m pretty sure whoever wrote this tip is most definitely a virgin. I positioned myself on my shitty queen bed, because I don’t have an ottoman (this is North Dunedin after all). The responses ranged from“who the fuck from Cosmopolitian thought this was a good idea” to “why the fuck would you say that.” What goes up must come down, and that’s exactly what this phrase did. 3/10

The second Cosmo tip is the ‘Pocket Full of Pleasure.’ If you want to get things steamy, but in a subtle way, Cosmo suggests sticking your hand in your partner's pocket and feeling them up. The article said the act should be followed up by saying “is that a quarter in your pocket or are you just excited to see me?” but after the Wankerton comment, I refrained. This tip is something which is good in theory, but not necessarily in practice. There are a lot of variables to take into account. How big is said pocket? Do you have room to maneuver around the fabric without looking like a pickpocket? What angle and trajectory is the package at? When you finally manage to take hold, you may get a look of surprise which turns into pleasure. It’s not the worst tip Cosmo has ever published, but it sure does require a basic understanding of physics and a sense of confidence. 7/10

This one is simple, and can be either sweet and wholesome or just fucking strange. The whole time you’re having sex, don’t break eye contact. It’s like a staring contest on steroids. If you’re doing it with your partner, chances are it will seem like a new way to reconnect with them. However, doing it with your one night stand, or a friend with benefits, it may be risky territory, and could very much come off as creepy. 5/10

As the list goes on, things get progressively weirder. According to Cosmopolitan, during sex, do EVERYTHING in slow motion. Again, I couldn’t tell you who came up with this, but whoever did probably never tried it. I want to have sex, not do the Mannequin Challenge. Things are meant to be fast and hot, sweaty and passionate. I don’t want to have to think about every move I make or continuously engage my core the whole time. People have sex to forget to think, not to think more. Be the hare, not the turtle. 2/10

Just when I thought all hope was lost, pillow power came to the rescue. Cosmo says to put a pillow under your back during missionary. I was hesitant. How could an entirely normal household essential elevate sex? As it turns out, it does just that. It’s like an episode of Grand Designs Revisited, you have an idea of what’s coming, but the outcome blows your mind in ways you never dreamed possible

This shit is simply fantastic. It feels like your organs are being rearranged inside of you. It’s like having a spiritual awakening. After doing this, everything began to fall into place. A sense of clarity washed over me, and I realised the true meaning of life. 11/10

It is at this point where it was hard to tell the difference between a Cosmopolitan sex tip and straight up torture methods. Apparently, poking your partner with a fork causes arousal. I, like any well-adjusted individual would be, was apprehensive about this tip. This for sure wasn’t how Sebastian taught me how to use a fork in The Little Mermaid. I was messing with the wrong dinglehopper.

Shockingly, it doesn’t work. It just feels like what it is — being poked with a fork. 2/10

You can tell a lot about a person by their Spotify. And who your partner is will definitely dictate how you feel about this tip. If you’re anything like me, chances are you’re fucking a white guy doing a BCom. In which case, this activity consisted of a lot of Radiohead and old school Kanye West. It was neither good nor bad, boring nor exciting. It was simply just listening to music during sex. It depends on the partner and the playlist. 5/10

Do it in front of a mirror

Now this one, this one is spicy and provides you with the ego boost you might need. Doing it in front of a mirror probably isn’t that uncommon, and I’m sure many have already tried it. It’s fairly self-explanatory. Just shove a mirror in front of your bed at the angle of your choosing. I imagine it’s how Kim Kardashian felt when she filmed her iconic sex tape and had to watch it play on screens all across the world. It might shock you at first, but as time goes on, you’ll get used to watching yourself, and before you know it, your veins will be flooded with narcissism. 8/10

Cosmo suggests that when you’re on top, you spell out the word ‘coconut’ with your hips for ultimate pleasure. This one is hard to master, and the experience can vary depending on if you chose to spell it in lower case or capitals. It kind of makes you feel like you're performing a circus act, or practicing a complex Jump Jam routine. It gets tiring quickly, and much like number four, seems to be more trouble than it’s worth. After a while, you begin to ask yourself, how do I even spell coconut again? What letter was I up to? It gets a 4/10 because it’s entertaining, but not necessarily effective.

This tip is less a review, and more a warning. Cosmo says to put a ‘clean’ coin on your downstairs region to help you orgasm. First of all, there is no such thing as a ‘clean’ coin, everyone knows coins are the grittiest, most disgusting, objects on the face of this earth. We literally banned them as a society because they were Covid carriers. But you know what? I’m not a wimp. I have an immune system made of steel, and I’m dedicated to my craft. So I did it.

And do you know what? It did shit all. Sure, it felt nice — I would equate it to jumping into a cold pool on a hot summer's day, or a crisp glass of pinot gris washing down your throat. But you could probably achieve the same feeling with an ice cube, or frozen berries, instead of a musty-ass coin. The orgasm? Non-existent. I probably just got some other fucked up disease instead. 0/10