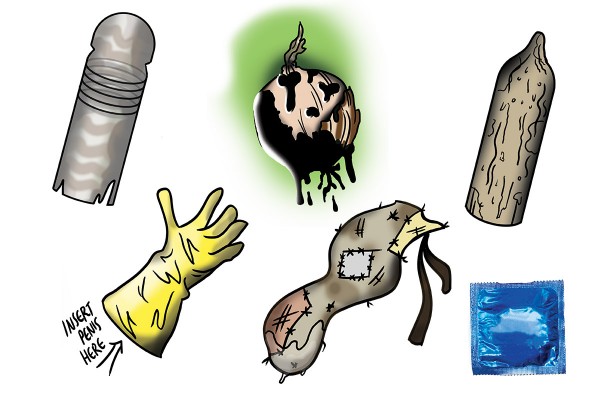 Wrapping Up the History of Condoms

Condoms could be a lot worse. The colourful history of humans trying to find a way to have sex without consequences highlights how appreciative we should be of current advances in technology, which have allowed us to have sex without dipping our penises in tar. It really makes you think.

In Tokugawa Japan, it seems they used a hard piece of tortoise shell, or horn, as a covering for the glans of the penis during sex. It is unclear at what stage of sex this device was used, because if they were on the whole time it seems that the hard coverings would cause almost BDSM levels of discomfort. Supposedly due to the pain that this practice caused, other family limitation practices such as infanticide, or abortion, were often preferred. This one is a pretty big mystery as to how they actually implemented it. It was reportedly phased out when Dutch traders brought in leather condoms.

In 1494, during the renaissance, an outbreak of syphilis devastated an entire French army. After this, the epidemic it spread across Europe and Asia at an alarming rate. In response, an Italian called Gabriele Falloppio recommended using a linen sheath soaked in special chemicals, dried, and then tied over the glans with a ribbon. Apparently, he performed a trial on 1100 men and none of them contracted syphilis. This approach is still high on the admin front, as going through the motions of tying part of a potato sack to the tip of your penis with a ribbon does have the potential to kill the mood.

There are wide ranging and ancient reports of various animal parts being used as condoms. According to legend, to protect his wife from the ‘serpents and scorpions’ in his semen, King Minos made her use a goat bladder as a female condom. Additionally, male condoms made from intestines or leather were common in Renaissance Europe. These were likely less than ideal, although intestines don’t sound too bad if you’re ever super desperate for a condom.

These aren’t really condoms but it is hard not to mention these treatments. In the Middle East, Muslims reportedly attempted male-controlled contraception by soaking the penis in onion juice, or by covering it in tar. There doesn’t seem to be any medical literature on the effectiveness of these treatments so maybe they were onto something. But it’s possible the treatment was worse than the disease in these cases.

When rubber vulcanisation was discovered, the condom industry went through a revolution. While rubber condoms offered less sensation than intestine condoms, they were extremely durable and therefore reusable, which made them a much more economic option. They were usually tailor-made by doctors who would wrap raw strips of rubber around different penis-shaped moulds until they found the one that best represented their client. They would then cure these strips into a condom. Eventually doctors worked out that it was better to create a one-size-fits-all condom, but the process was still super labour intensive. There isn’t much information about how people found their experience with these condoms, but it seems fair to say that their use could be likened to having sex through a rubber dish glove.

So the next time you hesitate before whipping out a condom, remember, it could be so much worse. You could be fucking through a dish glove, tortoise shell, potato sack, or cat gut.