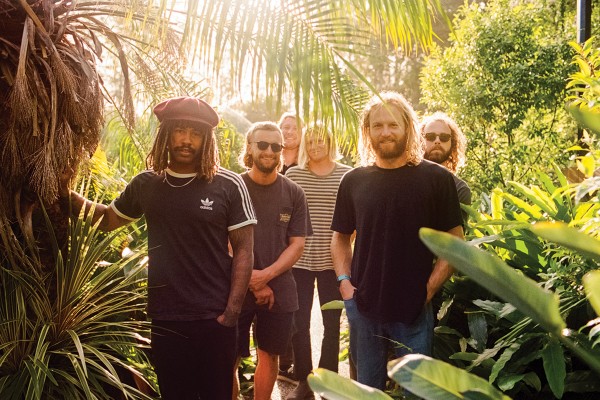 Aussie psychedelic rock band Ocean Alley have jammed their way into our playlists, festivals, and hearts in recent years with hit singles like ‘Confidence’ and ‘The Comedown’. In light of their upcoming tour across Aotearoa, guitarist Mitch Galbraith sat down with Critic Te Arohi to discuss their newest album — and spicy chicken.

Mitch, Baden, Angus, Lach, Nic, and Tom all met while in high school. Surfing together led to playing music together. Two EPs and three studio albums later, Mitch says they “surprisingly haven’t gotten over each other”. Their newest album, Lonely Diamond, mixes aloof rock n roll, with songs like ‘Hot Chicken’, to some more sci-fi-esque funk with songs like ‘Dahlia’, and a whole lot more in between. Mitch says that there’s always a desire to do something they haven’t done before that drives their music making. “As long as we’re doing something different, we’re happy with our direction.”

After Ocean Alley finished Chiaroscuro in 2018, they went straight into writing new music for Lonely Diamond. The band didn’t try and postpone their release because of Covid. “We got it done before lockdown and we just decided to release it. We wouldn’t have the chance to hold onto it and tour it later. We’d still be waiting.” This meant they haven’t had the chance to play the songs live as much as they would have liked yet, but they’ve had heaps of time to play around with ideas for their tour. “We’ve got this huge live show we’ve been working on. We’ve had so much time to muck around with ideas, and we’ve been pushing our production team to give us cool effects like cool lights and stuff.”

Mitch couldn’t decide whether he prefers playing music in a studio or live because they’re so different. “On stage you’ve got one take when you’re playing to an audience and it’s about putting yourself into that moment entirely and sometimes you’re not always thinking about the music, you’re thinking about just being in that zone”, whereas in the studio “you’re trying to hone in on the music and trying to make it perfect, and really conceptualise what you’re playing.”

Mitch says that Dire Straits, along with Jimi Hendrix, Bob Marley, and more of “those older bands in that whole era” are some of his biggest personal musical influences. As for the rest of the band, Mitch says there is a lot of crossover in music taste especially since they grew up listening to the same music — but all members of the band have their own specific preferences that “we listen to by ourselves when we’re by ourselves while we’re studying or working or relaxing, and that's not really the music we listen to with other people”.

Whenever they’re touring, the band makes sure to get out and sample the local cuisine. Bandmate Lachie is in charge of booking the restaurants, and is also “not a bad cook” according to Mitch. Lachie’s cooking prowess was made known to the internet when the band released a hot chicken recipe on their YouTube channel. Mitch tells us that all the boys love their spice and “they’ll eat anything spicy”, but the inspiration for their song Hot Chicken wasn’t actually spicy food but instead an interview on the Eric Andre Show where Eric breaks into a song about hot chicken.

“We kind of started from the groove of that and just mucking around in the studio. It sort of went from bad to worse depending on how you’re looking at it. That was fun and stupid, it feels really good to write songs that are just stupid sometimes. You’re trying to show a different side of yourself.” Lonely Diamond has a mix between tracks with deeper meanings and more fun, silly songs. Mitch says “it just would have been too unbearable for us to sit there and write twelve deep and meaningful tracks”.

While Mitch says he is “a man of facts and science” and doesn’t believe in any conspiracy theories, we did discuss the mysterious disappearance of Australian Prime Minister Harold Holt, who went swimming one day in 1967 and was never seen again. “If I had any guesses, it would be a shark attack, but anything could have happened,” he said.

We also asked Mitch what colours all six of the band would be if Crayola released an Ocean Alley themed crayon box. He reckoned he would be a fluorescent yellow, Angus would be a pale green, Baden would be a pastel pink, Nic would be red, Tom would be orange and Lach would be purple. “I hope they read into those colours, and go ‘what the hell’.”

Ocean Alley, with support from Hockey Dad, play at The Dunedin Town Hall on Wednesday 22 September. You can grab tickets from ticketmaster.co.nz.