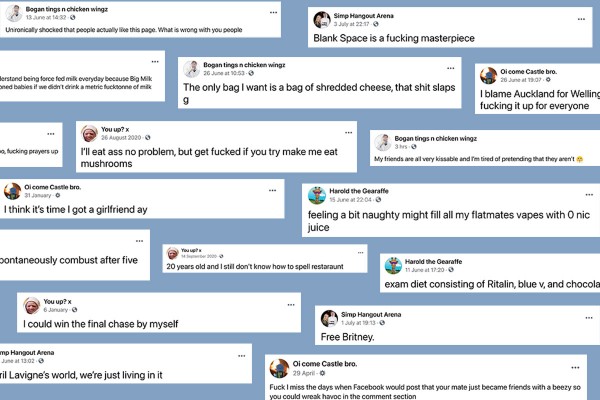 The Cultural Phenomenon That Is Dunedin Shitposting

Ah, shitposting. Nothing compares to opening Facebook and seeing a low quality attempt at humour brightening up your newsfeed. Dunedin is fortunate to be home to a number of shitposting pages, each varying in size, audience, genre, and quality.

Some of Dunedin’s most iconic shitposting pages include All day ref, Snorting g’s and Banging 3’s, and Oi Come Castle Bro, which have a combined follow count of over 80,000 people. So, why are these marginal comedians so successful, despite the majority of their content being more or less the same joke over and over?

The world of shitposting has been described by Matt*, admin of Simp Hangout Arena, as “a great form of expression despite requiring no talent.” Jamie*, an admin of Oi come Hyde bro, said that the art of shitposting is “based around the psychology of trends. It's almost a horde mentality, where if you simply take something which you know the majority of your audience will be able to relate to, you’ve got a guaranteed recipe for a hot post.”

This sort of thinking seems to be shared by the shitposting community. Charlie, the admin of Oi come Castle bro, said “because it's funny and often relatable to many people, it provides a good laugh.” He isn’t wrong. The majority of trending posts seem to revolve around the day-to-day trivialities of life as a student. Posts sounding like a breatha’s diary entry often bring plenty of success.  “Ceebs going to lectures aye”, “todays a good day to get on the beers”, or “fuck think I just failed my exam” are examples of posts which amass hundreds of likes and comments.

That's not to say that all posts are simple and generic. Some are incredibly well thought out, and targeted at a specific niche topic. Take a post by Harold the Gearaffe for example: “I swear u go into mcdonald’s and it’s like stepping into the ICU of a hospital like beep beep beep stfu n make me my mcchicken''. That sentence alone is more powerful than any essay written by an Otago student.

So what inspires these anonymous comedians to create these pages, which carry the sole purpose of vomiting verbal nonsense across student news feeds? Indy Jackson*, the admin of You up? x started the page in 2019 because he “thought it’d be funny to post dumb, low effort content to a large audience with a veil of anonymity.” He also “thought it’d help me get girls, it doesn’t. Every girl I've told thinks I'm a pervert with a foot fetish, but really only the latter is true,” he said, baring his heart and soul.

“People like shitposting because it's lowbrow relatable humour,” he said. “It’s almost too easy. Anything remotely related to drinking, partying, drugs, or sex will be found funny by groups of people everywhere. Posting ‘Dua Lipa feet pics’ would probably get more attention than something I actually find funny.”

Charlie of Oi Come Castle Bro said that, just like Indy Jackson, he “originally just started the page to improve his chances of pulling”. This comment was immediately followed up with a “nah nah nah I’m joking bro”, so who knows what his real motivations are. His creative process seemed to revolve around situational humour. “A lot of [posts] have just come from convo’s with the boys based on the situation you're in. If something funny happens, you just write about it and chuck it up.”

While it may seem apparent that shitposting is a male-dominated pastime, that’s not always the case. According to Facebook analytics, the audience of Oi come Hyde bro is currently 48% female and 52% male. Interestingly enough, the vast majority of people commenting on the shitposts are female, often tagging their mates or communicating with the page directly. Female-moderated shitposting pages are also on par with the men, with pages such as Shore girl, sure thing, Ur sunday beezy, and Bogan tings n chicken wingz holding 54,000 followers combined. When talking to Susan*, the admin of Bogan tings n chicken wingz, she felt that it offered a creative outlet so that she could vent “whatever shit came into my mind.”

Whether you love or hate the feeble attempts at humour, shitposting is the apex of Dunedin student culture, arguably even more so than listening to stupid amounts of drum and bass and getting on the sauce before midterms. We are witnessing a cultural revolution, the blossoming of a fragrant kaleidoscope of artistic degeneration that swirls around like kush in a grinder, or shit down an overflowing toilet at Hyde Street.