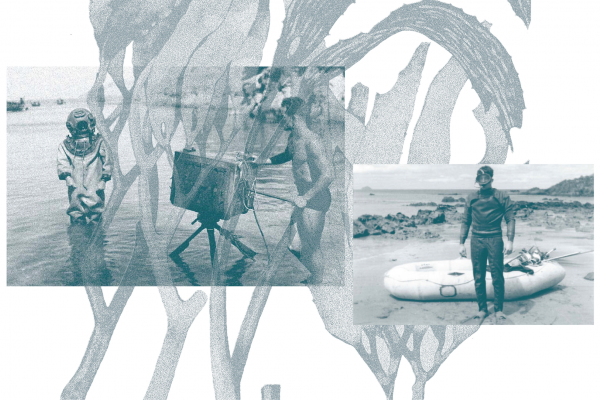 From 11 June to 20 June, the Screaming Rooster will play host to something a bit different. Aquanauts, a pop-up art exhibition about the history of diving, has been set up by eight Communication Design students from Otago Polytech.

Rosa Nevison, Hanna Anstiss, Emily Bell, Emily Montgomery, Ella Todd, Libby Ward, Katy Mackay, and Aimee Smith have all played a part in developing the immersive experience. The project started out as an idea in one of their classes, but actually putting on the exhibition is not a part of the requirements. It sounds like it’s been a lot of work to fill the five different spaces. “It’s gone way beyond the original project,” says Emily Bell (who happens to work as one of Critic Te Arohi’s illustrators). “I think we’re all realising in this last week that we’ve bitten off a lot.”

Emily describes something called a diving bell to me, which sounds fucking terrifying. Basically back in the old days, there was an iron container filled with air that people lowered down into the ocean with rope. Divers then went outside of that container, connected to it by a little tube of air, until the air ran out, when they were pulled back up again with the ropes.

Part of the exhibition focuses on those early stages of diving, she says. “There’s old film footage that gets projected on the screen and then people have headphones that they can listen to like a script that kind of describes what it's like to be the diving bell,” she said. There will be immersive videos of modern diving, and even VR in one of the rooms.

“The main video is super cool, Ella made it and took it from when you’re above the water then it goes in and you get the heart beating, going underwater, a gasping noise,” Emily says. “The large scale makes it more effective as well. Some of the footage is unreal with the corals and everything.”

“We want it to be the diving experience but in a different way. It’s taking an abstract approach and not being super factual,” Emily says. “We wanted it to look and feel like going down into the ocean, just a bit different.”

Emily says that even though it’s an artistic exhibition, they hope it might inspire someone to take up diving. “Our hope is that the audience is coming to be fully immersed in this new world of diving,” she says. “We had a lot of chats with Dive Otago and they encourage people to try it, it’s kind of a promotion for that. More arty though, a new way to inspire people to take it up.”

The exhibition is free, but Emily encourages people to have a drink to help them pay off the venue. “There’s gonna be a bar tab to pay off Screaming Rooster. We want to emphasise that, you can have a drink,” she says. “We encourage everyone to buy some bevvies. It might enhance your experience.”

The event page for Aquanauts can be found here.