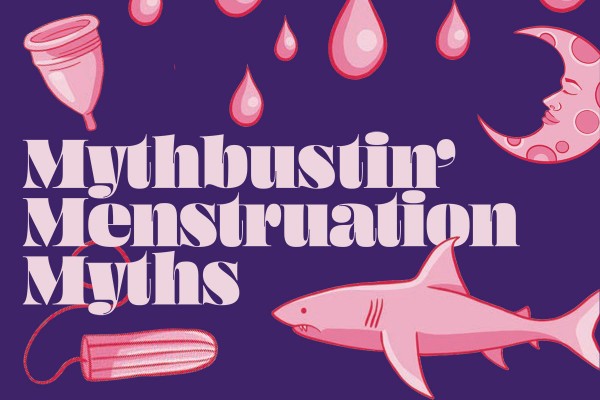 Menstruation myths have been around for yonks. The term menstruation originates from the Greek words men and menus, with men meaning month and menus meaning moon and power. Menstruation has always been symbolically tied to power, both good and bad. It’s not surprising then, that many a myth has been proposed related to menstruation.

Deadass, I feel like lots of old-timey myths came about to oppress menstruators, to keep us down and out, because non-menstruators stay afraid of our power. It’s hot as fuck to see menstruators claim back this power. We can see it in such simple actions like using and colloquially redefining the word period, a word that we used to be afraid to speak aloud for fear of judgement.

Periods are controlled by the moon

Contrary to popular belief among chakra-aligning, crystal-charging, astrology-following, tarot-card-reading individuals, our Mother Moon probably does NOT control the inner flow. It’s easy to see how we fall into the trap of believing this myth — Mother Moon controls the tides of our oceans, so why shouldn’t they also control the tides of my uterus?

A reason why this myth might be widely believed is that a full lunar cycle is about 29 days, and the average menstrual cycle is about the same. So, if you’re one of those lucky fuckers with a regular and punctual period, your bleed would most probably align with a certain phase of the moon every single time. Sounds magical!

A shark’s sense of smell is powerful. They can detect blood up to a mile away if you believe the pop science fluid. So of course one might be led to believe that swimming where sharks could be present while on your period could increase their attraction to you.

But, actually, nope. If you’re being smart and sanitary about it and plugging, or cupping it up, you should be fine. Even if you did decide to free-bleed in natural waters, the acceptability of which I will not comment on, apparently the amount of blood lost isn’t enough to cause a swarm of sharks. The blood lost isn’t all blood, but rather a hot cocktail of blood mixed with tissue and mucus. There have been no reported shark attacks on people who were menstruating at the time of attack, and in fact, far more non-menstruators have been victims of shark attacks than menstruators. Live your best mermaid life around the clock!

Then there are the mean stereotypes and harmful tropes

The following few myths are old-timey and simply all untrue. They appear to be designed out of fear and spite, to steal power from the divine people who menstruate.

If you drink heaps of water during your period, it will finish faster

What a dream this would be. Imagine diluting your period out by just chugging a bunch of water. There is no concrete scientific material to support this, but getting a good amount of water in while you’re on your period has been associated with reductions in cramp severity and frequency, so drink up.

Truly the wackiest one of the bunch. I don’t think there is any scientific backing for this myth, but it sure would be huge if true. If you’re feeling lucky and down to play with the possibility of pregnancy, please experiment around with this one and let us know what happens.

Your period syncs up with your friends and flatmates

I personally believe this one to be true, but the scientific material surrounding the topic is varied and inconclusive. Period syncing, also known as menstrual synchrony, or the McClintock effect, is based on the idea that when one menstruator comes into contact with another, their pheromones (chemicals secreted outside the body to influence the behaviour of others) influence each other so that their cycles eventually line up.

Most of my menstruating friends anecdotally support period syncing, especially when menstruators are living together or spend hours with each other daily. However, scientists largely disagree with this.

Being in water stops your period

No, the uterine lining doesn’t stop shedding when you’re in water. But, water makes gravitational forces weaker than when you’re on land, which means that period blood may slow down temporarily or not flow out of the vaginal opening while you’re in the water.

Just think of it like your period blood is suspended inside your uterus, chilling out, similar to how one would float in water if you lay on your back on the surface, starfish style. As much as I despise physics, buoyancy, pressure, and suspension are truly fascinating.

I encourage y’all to open up these conversations with menstruators, have a giggle about the silly myths, and more real talk about the harmful ones and how they might contribute to negative perceptions and stereotypes surrounding menstruation. In any event, just check yourself on these myths and do the internal work to normalise and accept menstruation and periods in all their perceived and subjective ugly-ness and beauty. None of us would be here without periods, and that’s on period.