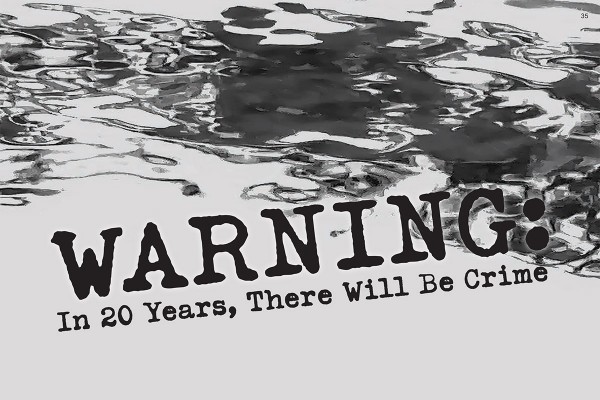 WARNING: In 20 Years, There Will Be Crime

The 1960s were a beautiful time. They gave us tie-dye, ketamine, hippies, the Manson Family, and the beginning of an unusually violent global crime pandemic. I don’t mean to alarm you, but it could happen again. And it’s going to happen in Waikouaiti and Karitane.

Let me explain. Around the time Cher released her debut album, we saw a huge surge of crime around the world. This continued over three decades, peaking in the ’70s. Murder rates quintupled. Robbery rates escalated by whatever quintupled is but for the number 14. It was a bad time for people who don’t like to be murdered or robbed.

The felonies gradually tapered off by the ’90s, and now we have a nice normal amount of crime again. But there’s a theory as to why everyone during this time was fucking batshit. Spoilers: It wasn’t because of Cher. It’s called the lead-crime hypothesis, and you can thank it for the sensationalised murder podcasts that white women love so much.

The Ted Bundys of the ’60s–’90s all had something in common, and that was having consumed colossal amounts of lead as children. Lead used to be in everything. Lead was in the walls of their childhood homes. It was painted onto the toys that your grandpa directly put in his mouth during his Freudian oral stage. Most importantly, lead was in the gasoline fumes emitted from their sexy seatbeltless cars. You might decide to suck on lead toys, but gasoline isn’t a choice. More crime was reported in communities living next to major freeways, who were exposed to more emissions.

“Lead contamination of the environment is insidious,” says Dr Mike Palin from Geology. “First there was plumbing — the fucking word is Latin for lead! Then came projectiles, paint and petrol. As a society, we've decided it's too pervasive to clean up so we just continue to live, eat, and drink the shit.”

Lead poisoning is often undiagnosed, which is unfortunate when you learn that even moderate amounts of lead poisoning can lead to aggression, impulsivity, and lower IQ: The perfect recipe for cooking up trouble. After people realized lead was bad and phased it out, America reported 58 million fewer crimes. This correlation can be seen in every country without exception.

Here’s the bad news. You might remember that the Dunedin City Council detected elevated levels of lead in Karitane and Waikouaiti in August last year. They only bothered to mention it a few months ago, after people had been slurping up lead water for much longer than you ought to be slurping up lead water. This fucking blows. It’s not the residents’ fault. And water has mauri. Don’t mess with it.

It’s probably not just limited to Karitane and Waikouaiti, either. Dr Palin points out that “until recently, plumbing that was sold as "lead-free" could have up to 8% lead in it. That's eight parts out of a hundred — the action level for lead in water is ten parts out of a billion. Who the fuck decided that?”

Please note that the victims here are not all going to become criminals. It’s correlation, not causation, between lead and crime. However, there is causation between lead poisoning and inhibitions in the brain. We already know that there’s a link between head injuries and propensity towards violent crime, so if you’re at risk, just don’t become a professional boxer. Wear a helmet if you need to.

We can only assume that the lead was planted by Serco in order to increase the New Zealand prison population. Lead → crime → prisons → profit.