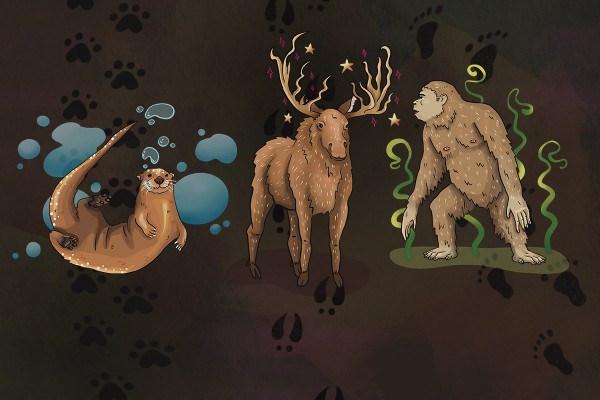 NZ CRYPTIDS: Which would be the best to live with?

Flatting is expensive, and finding a good flatmate can be tricky. With environmental destruction plowing through the nation, many elusive figures of the wilderness have decided to hang up the spooky hat and make tracks into town. Some want degrees, some just want the ladies, but all are moving to Dunedin. Before you sign your next flat, here are eight contenders rumoured to have haunted New Zealand, looking to trade their no longer pristine wilderness for a cold, damp, Dunedin flat.

The Goat Man is half-man half-goat, the product of a lonely farmer and a sultry farm animal. He was likely born as a product of lead poisoning in the ’50s, when people had fewer inhibitions (see page 33).

He’s reported as being around 7–8 feet tall, “putrid smelling”, and covered in thick, matted fur. Sometimes he’s clothed. Sometimes he’s naked. It all depends on how lucky you are. While originating from Waiouru Military Camp/ Desert Road area, the Goat Man has been reported to hitchhike around the country. He can be either a good or bad omen. One witness account says that:

“You stop and give him a lift, but just a short way up the road he asks to get out. Sometimes he just disappears from the car, having safely gotten you past the stretch of road you were about to have an accident on. Just seeing him on a dangerous piece of road has avoided you from an accident about to happen, most probably right where he stood.”

The Goat Man is the GOAT. Supposedly something bad will happen if you don’t pick him up, but that’s your fault, because all this mechanically-minded individual wanted to do was check your WOF. The only bad thing about The Goat Man is that he’s very smelly. Out of all the cryptids, he’s the most modern, having adapted to all current technology except spray-on deodorant.

Sometimes you don’t even know that he’s a goat until he gets out of your car, when you hear the clopping of hooves fading into the distance. Metaconspiracy: The Goat Man is just a Dutch man. He’s very tall and smelly and his feet go clop clop clop because he’s wearing clogs.

Everyone’s heard of the Moose, and at one point, this cryptid was very much a real thing. Probably. But, just like Sven, the Moose hasn’t been seen in a little while, and people are beginning to wonder if he was ever here at all. Incredibly lanky, awkward, and always hungry, the Moose is hard to disagree with.

You’ve actually already flatted with this guy. In fact, 20-30% of readers are this flatmate. First seen in the 1870s, these “big hairy men” of the West Coast have since interbred with kiwi chicks and their offspring are everywhere. They’ve essentially been domesticated. Some Aussie woman caught her first glimpse of a true Westlander and lost her shit and now we have a myth about them.

This flatmate is pretty much A-okay. He keeps to himself, he’s got a problem with washing and cutting his hair, and has a preference for leather clothing. He’s not an ideal flatmate, but he doesn’t get in your way.

He also grows weed. He doesn’t tell you this, but you know this. No, he will not share. Yes, it’s as stinky as he is. Check out the cover of Critic issue two from Febuary this year for a depiction of the Moehau Man’s acclimation to modern society. Fastest yardie time of all the cryptids.

The line between “figure of major cultural significance” and “cryptid” is blurry, but a white guy called Mark on Paranormal NZ says that Taniwha count as cryptids, so we’re gonna run with it.

As a flatmate, taniwha are not awesome. They have an intense disregard for your personal space, and absolutely no qualms about stealing your food, especially potatoes. Taniwha prefer to lurk in their room, and while you rarely see them, the encounters that you do have are certainly memorable. Like when you left the kitchen in a tiff after a party and they retaliated by flooding your room.

Because they only leave the flat for $2 wedges, Taniwha are easy to get along with, so long as you stay in your lane and respect their space. If you get on their good side, though, they can be the best flatmate you’ve ever seen. Absolutely nothing gets past them, and that skeezy dude that’s been hanging around recently won’t be a problem after ol’ mate talks to him.

The waitoreke is an otter, or maybe a beaver, or something in between. Captain Cook apparently first saw one from his ship in 1772. There are a few reasons not to trust this:

The waitoreke will lie to you on the flat application about its habits, degree, preferences, and anything else. Not for any particular reason, this is just the way they behave. They’re here for a good time, but also for a long time. It’s their sixth year at Uni, because they know that once they leave, they’ll never have anything like this experience again. And neither will you, but don’t think about that.

Waitoreke will spend all of their time outside the flat, mostly at the kayaking club, and probably get their eighth concussion this year because they “don’t believe in helmets.” Then they’ll shit on your floor. Waitoreke just really don’t get it, and you don’t get them.

You’d have to run her past your landlady first. Most flats don’t accept cats, let alone giant ones. Inbred cats do have a significantly shorter lifespan, so make sure to consider backup flatmates when signing the lease.

Patupaiarehe, or pakepakehā, are fairy-like creatures from Māori folklore with light, untattooed skin and red hair. They’re scared of the light, only emerging at dusk or in the mist. They go doot doot on a magical flute that lures in women.

This guy is the fucking worst. Haunted Auckland describes them as “unfriendly” creatures who shun intruders, surrounded by a cloud of mist. He’s your flatmate who sets off the fire alarm with constant vaping. He thinks that he’s a DJ, and forces Tinder dates to endure hours of his doot-doot flute DnB.

One way to ward off patupaiarehe is by cooking food. They only eat meals raw, which fits in all-too-seamlessly with certain people at this Uni. All of his meals look like they’ve been vomited up once already. No, chicken can’t be “medium rare”, patupaiarehe. Yes, you do have to clean your Nutribullet. It’s not like a cast iron pan.

Some wankers argue that patupaiarehe are evidence of pre-Māori pākehā existence in Aotearoa, because some wankers will sooner believe in literal fairies than the integrity of brown people. Your patupaiarehe flatmate probably votes New Zealand First and does not respect Te Tiriti. Also, he’s ginger. Yuck.