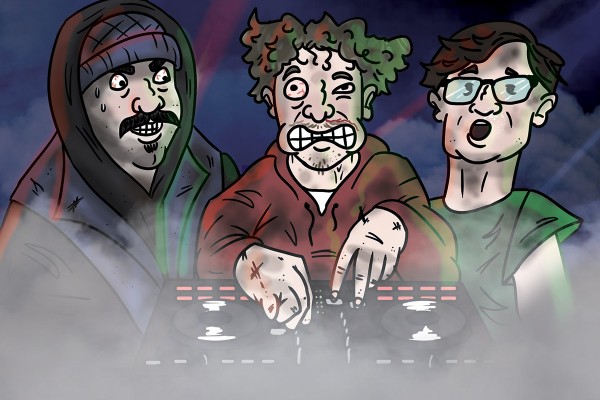 The Rise of Dunedin’s Drum and Bass

Drum and Bass music is a major part of Dunedin life. It is the soundtrack to the Otago experience. But what will its future be? Critic sat down with some of Dunedin’s very own DJs to uncover the evolution of DnB.

Bando is a bedroom DJ, a hobbyist who practises at home but doesn’t perform on stage. Bando started getting into DnB during his first year in 2019. “I came [to Dunedin] and I felt quite guilty listening to it. You arrive and it’s associated with the breathers, and it’s very intense music that doesn’t really match anything else I listen to.” Now, he’s an avid DnB fan who mixes with his decks and chucks the final product up on Soundcloud.

“I grabbed my first decks when Covid was starting. Lockdown was a great way to start DJing,” DJake says. “I was messing around with decks, doing it as a hobby, and over time you get people asking you ‘oh can you mix at my party?’” DJake has progressed quickly, and is starting to work with Gravity events, with TWGY, another Dnb artist.

O2 is an independent DJ-for-hire, advertising his business on Facebook. Like Bando, his career started in first year. “[When I started] there weren’t many DJs out there, and DnB was still a little bit niche,” he says.

Offload, another DJ who has been climbing the ranks said “it was pretty niche in Hawke’s Bay when we were in year 13. People were listening but it still wasn’t mainstream. Even when I came to Dunedin, it wasn’t as widespread as it is now.”

DnB has grown to reach a much wider audience. It’s no longer something you’d only find in a University basement.

“With Covid-19 keeping everyone in NZ last year, we were able to have big parties over New Years. It was massive for DnB in New Zealand,” says Bando. “My younger brother in high school, his friends and cousins, are all talking about DnB.”

DJake reckons some of that popularity comes from using pop music in DnB tracks. “It’s becoming more popular to splice DnB with a pop song, which I hadn’t really heard when I started. Like a DnB remix with Mr Brightside, you play that at Starters at 2am, people are gonna fucking hype.” O2 said that the scene’s become more “professional”. “You used to go to a party and there were a few people using Spotify. Now you go to a party, there’s a DJ, speakers, lights, there’s everything.”

Whether you call Dunners the “DnB hub” like Bando or “capital of DnB” like O2, there’s no denying that the scene is an important part of the culture. “The studentville is so special, you just stroll the streets with your box, and you hear DnB all around you,” says Bando.

“Bright” is the word Bando and DJake use to describe the future. “There’s a lot of up-and coming artists. I think it’s getting bigger and bigger each year,” says Bando. Dunedin is currently on the world stage in the DnB scene, even compared to big cities like Auckland or London.

On the other hand, DnB might just be another phase in Dunedin culture. “It depends because some people might get sick of it,” says Offload. TWGY thinks that DnB could slowly die out if something new comes along, but he’s hopeful at the moment.

“In terms of music it’s very sick, in terms of artists, I have friends who are becoming producers and see what’s happening, which is cool. It could be this thing that’s rising, and then it’ll stop when another thing comes through, but at the moment it doesn’t seem like that’ll happen anytime soon,” he says.