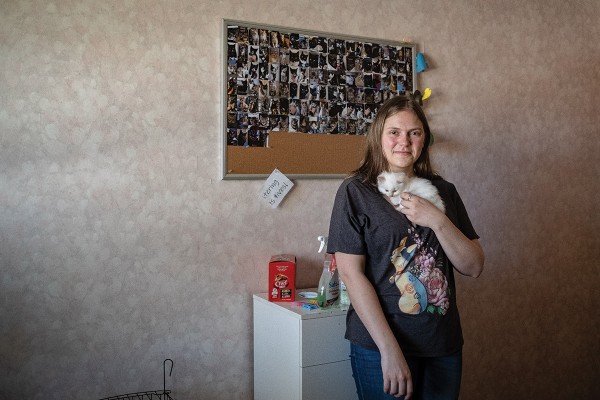 You might think you love pussy, but Cat Rescue Dunedin love pussy more than you. Critic sat down with Amber Coste, President of CatS (Cat Rescue Dunedin Student Association) and committee member of Cat Rescue Dunedin Charitable Trust, to talk about cats and how students can get involved with the new club. We also visited her house because she had five cute kittens, and that’s important journalism.

Amber is, in the best possible way, a cat nerd. The cats she fosters for Cat Rescue Dunedin are all named after gods from different mythologies. She has fostered over 75 cats during the past three and a half years while studying for her PhD.

“I prefer not to take more than six cats at a time, that’s my limit,” she said, like that’s a normal amount of cats to take on at one time. She explained that six is about the size of a litter of cats, and it is best not to mix different litters, because cats can pass colds to each other.

“We quarantine them for 14 days if they’re sick,” she said. “So when we heard about managed isolation we were like, yep, I coulda told you to do that.”

Rescuing cats can be kinda depressing. Even though you might not think Dunedin has a cat problem, according to Cat Rescue’s intake numbers, we do. They’ve rescued over 300 cats this year alone.

“The sad part of the job is that about a month and a half after Christmas we always get a huge influx,” Amber said. “Cats that were very small, and cute, and fluffy at Christmas, then people think, ‘oh it costs money’, and the kids are bored of it, and it’s too much work, so they just leave the cat somewhere in a park.”

Amber’s own Christmas was spent trapping cats after a friend messaged her to say that she’d found four kittens in her flat’s garden and didn’t know what to do. After figuring out that the cats didn’t belong to anyone (through contacting the neighbours and putting paper collars on the kittens), they got out a food trap. “One end is closed off, and then there’s a trip plate which closes a door behind them. You bait with delicious food, and they can’t get to it unless they go into the trap,” Amber said.

“We caught the whole family and a feral tom who was probably the dad,” she said. The family of cats ended up staying with her, in her bathroom so that they were separate from her other foster cats.

“He was a giant tom. We left out a tiny trap with food to lure in the kittens and we looked outside to see this giant tom stuck in the cage.” The tom turned out to love humans after he was neutered. “My friend fostered him, and he turned into this massive loving smushy boi. He would lay all over you and purr and drool.”

Amber won’t have to provide any emergency housing for new cats anymore. At the end of March, Cat Rescue Dunedin opened a new intake centre in Caversham. “The intake centre has hugely helped,” Amber said. “Last year in total we rescued 450 cats and we’ve almost got to that now and it’s only one-third of the way through the year. Things ramp up really fast.”

The intake centre lets them take on new cats, get them checked by a vet, vaccinated, and dewormed, while keeping them in a sterile environment. Then they can safely send them out to foster homes.

“We are really foster based and we find that’s what works best for the cats as well. It’s a lot less stressful than a shelter environment, where you’re in a cage.” In a shelter situation, “everything is scary and nothing feels like home” for the cats, Amber said.

She thinks that the foster system is better for people adopting cats, too. “It means people can meet a cat in a home environment, when they’re more relaxed than they would be if they were just sitting in a cage somewhere. They come out of their shell and show their personality more quickly.”

Cat Rescue are “trying to fill the gaps” left by the SPCA, Amber said. “A lot of the time the SPCA can’t help but when they’re full, or if the cat is quite timid — we tend to take on any of those. We try and share the workload.” She said that the SPCA tend to focus on cats that are friendly to humans, whereas Cat Rescue foster out the cats and encourage them to be social enough that they can be adopted.

Amber set up a student club because Cat Rescue Dunedin want to get students involved. “A lot of people feel that the main way they can participate and help the charity is through adopting a cat or fostering a cat, which a lot of students can’t do,” she said.

As well as working with the cats by fostering them or doing jobs like trapping or feeding them at the intake centre, Cat Rescue needs people who can raise money. “We are funded completely through supporters and fundraisers. Like quiz nights and raffles and market days, it’s almost all donations from the public.”

Hobbies can be useful for fundraising. “I make plush toys in my spare time, we sell them or auction them off. It could be paintings, designing a t-shirt, even just running a stall for us,” she said. “Not everything involves having cats with you, but some of it certainly does.”

“We’re really keen to get people involved and find out what people want to do to help out.”