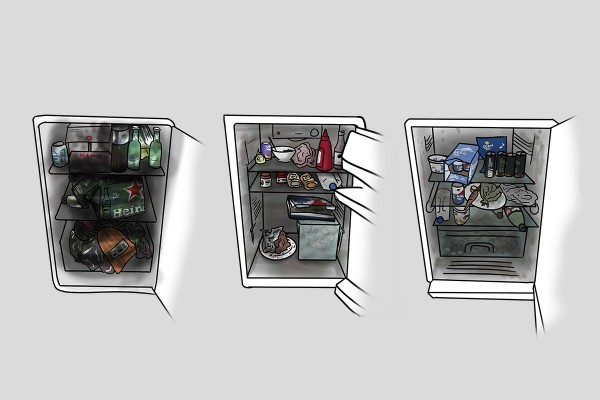 The Breatha Diet: a vape a day keeps the doctor away

There is quite possibly no creature as great, and as wild, as the Otago breatha. They can often be seen vaping, drinking, and sending pesky “you up x” texts at ungodly hours.

How do breathas maintain such a lifestyle? What on earth could they possibly be fuelling their bodies with? You needn’t wonder anymore. I have conducted an experiment of the utmost scientific rigour.

Over the space of almost a week, we recruited local breatha Daniel to fill out a meal log. Otago nutrition student Kate then analysed what was being consumed, and how the breatha diet would impact someone for the long term. Daniel claims he is “not actually malnourished” because he “eats a lot of vitamin tablets as well lmao.”

Daniel started the week off strong with plain toast for breakfast because he was late for work. He accompanied the bland, fibrous flavour palette with a coffee and vape. His vape flavour of choice is 40mg cola.

Daniel claimed that vaping is actually really healthy for you given its low in calories and is the ideal boost to start your day with a rush. “I don’t know why everyone says it’s unhealthy, look how low it is in calories,” he said. Daniel’s scientific claim is incorrect, as Kate says that “vaping causes lung cancer” and “your vape flavour doesn’t count as fruit.”

For lunch, Daniel hit up Clubs and Socs as they gave out free bread. Apparently a bacon pull apart helps with the study. For dinner he had homemade chicken fajitas and said “fucking oath. I’m eating well today.”

Given it was a Thursday, he finished the night off with a mere half bottle of vodka. He then had a dusty feed which consisted of a packet of sour cream and chives chips, and a singular Tim Tam. He also contemplated making noodles, but just couldn’t muster up the effort to turn on the kettle.

Friday saw his breakfast staple of a coffee and a vape return. Lunch was apparently “ceebs” so he opted for an afternoon nap. This option is economically efficient, but not nutritionally efficient. Dinner was a “$5 dominos pizza leshgo”. Much like Thursday, Daniel polished the night off with six cans of Rinse Green Apple. His dusty feed was a bag of chicken chips.

“They’re not as good as the sour cream and chives chips but brings back memories of being seven years old at after school care,” he said. Judging from this food, it looks like he is still in after school care.

Daniel splurged on two hot cross buns and a vape while he “thanked Jesus for creating these sick breads”. Apparently his lunch cancelled his previous meals, as he had a ham sandwich with salad, as well as two apples, and another hot cross bun. For dinner, the flatties made beef burgers with a side salad.

He got his five plus a day in this time. In true Easter tradition, Daniel saw out the evening by having a Nitro and four cans of Rinse. For the dusty feed, Daniel opted for noodles and another hot cross bun. After considering combining the two into a fucked up sandwich, he was talked off the ledge by his flatmates.

Despite his daily rituals, on Sunday Daniel “didn’t have time to make a coffee because Nan was making me go to Church”. In the true spirit of Jesus, he opted to just hit a vape. For lunch he had the Blood of Christ (also known as wine), three hot cross buns with jam, and half a big Easter egg. For dinner he had bean burritos, Lord help whichever beezy this man ends up with. To finish off the week he managed to find two half empty Rinses, which he polished off with dinner.

Monday morning saw the caffeinated combo of a vape and coffee appear again. He scored a bargain with some “cheap as” leftover hot cross buns, knocking back two for lunch. He also followed up with a packet of noodles and a couple of apples. Dinner was tomato pasta with cheese, the first time any source of calcium has been mentioned throughout the entire week. He wasn’t able to drink away his Monday, as his alcohol stock was depleted.

Upon reflection, Daniel said “cheahoo I think I spent more on alcohol than I did on food this week.” According to Kate, Daniel needs to “drink something that a basic white bitch wouldn’t,” but she is “proud of him for eating an apple.” It would have been good to see “something other than bread” being consumed, because boy those bowels must be tight. The breatha diet makes one at risk for many micronutrient deficiencies. Do with that information what you will.