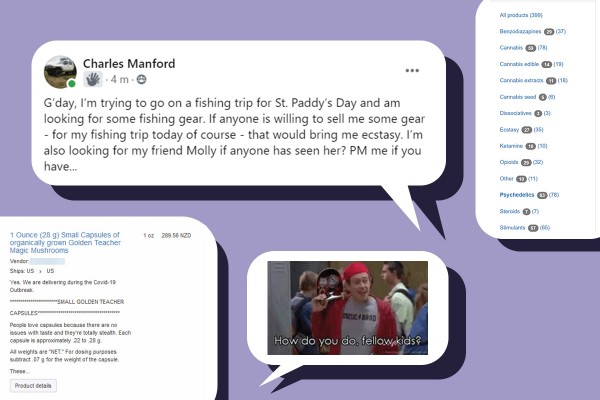 Fantastic Drugs and Where to Find Them

The Deep Web, whilst sounding like a 2005 sci-fi hacker fantasy realm, actually just refers to anything on the internet that won’t directly show up when you search on a search engine like Google. This includes anything from your email homepage, to your Netflix homepage, to your TOUR269 facebook group. The Dark Web, on the other hand, is slightly more akin to your 2005 sci-fi hacker fantasies, although still leaves much to the imagination. The Dark Web, a small part of the Deep Web, is made up of networks that require a special software, configuration, and key to access. Investigative journalists often use the Dark Web for secure interactions with anonymous whistleblowers and activists in repressive regimes. Not me. I was looking for a source of a different kind.

I installed TOR and visited a well-known website that indexes links to less-than-legal marketplaces. After going to one that specifically shipped to New Zealand, I found myself on what looked like TradeMe’s crackhead cousin. Various vendors were selling everything from pot brownies to benzos to cocaine. I could buy 50 grams of pure ketamine or tabs of LSD with Adventure Time characters on them. It was a heady experience. Everything is done through bitcoin, and every seller has reviews, so you can see who the dodgiest source is. There’s even a leaderboard of top sellers. Unsurprisingly, there isn’t much MDMA being sold within New Zealand currently, but there are a lot of cathinones on offer. The international markets are crazy cheap (except for shipping), although you risk your drugs getting seized by customs before they arrive at your door.

The Dark Web is the Pak'nSave of buying drugs. It’s a bit more effort than some of the other methods, so you’d only do it if you were buying bulk, but the value for money is top tier.

Discord, a communication app designed for gamers, may also be the home to your friendly local drug dealing community. Discord groups are exclusive, you have to be invited in, but the conversations are an interactive affair. It is mostly dealers discussing everything drug-related, from which strains of weed are being grown at the moment to who has ripped off who. A drug deal on Discord will involve an old-school meet-up in a park or from a car.

Discord is the neighbourhood market of buying drugs. It’s more personal and closer-to-home.

Snapchat can be an easy way to buy drugs, usually weed, from specific dealers. They’ll post pics of their goods on their snapchat stories and you can hit them up for a pickup or delivery. You feel a bit like you’re messaging an influencer, and some of them are notoriously unreliable, but when you’re out of other options, Snapchat plugs can be a good bet.

Snapchat is the Sexy Garfield of buying drugs.

I wasn’t about to try and buy drugs with my personal Facebook account, so it was time to create a fake account. So Charles Manford was birthed into cyberspace. He had a ute as his profile picture and a bowl of baba ganoush as his cover photo. If there are three things Charles loves in this world, it is his ute, a good bowl of baba ganoush, and MDMA.

After setting up his profile and making a few friends, he requested to join Otago Flatting Goods, as well as as many other local Dunedin facebook groups as possible, and waited. Alas, Otago Flatting Goods never accepted Charles Manford. Maybe they saw through the elaborately crafted persona. Maybe they hated Baba Ganoush. We’ll never know, but Charles Manford had to push on. He had drugs to buy.

Most local community groups I found had explicit rules against buying or selling drugs of any kind so I had to go full high-schooler and use thinly veiled code in my post. “G’day, I’m trying to go on a fishing trip for St. Paddy’s Day and am looking for some fishing gear. If anyone is willing to sell me some gear, for my fishing trip today, that would bring me ecstasy. I’m also looking for my friend Molly if anyone has seen her? PM me if you have...” My post racked up a solid 17 reacts and five comments on Dunedin News in the 15 minutes it stayed before the tyrants that run the group deleted it.

Only for the most desperate of fiends. To test this one out I went down Castle Street, knocked on some unfortunate residents’ doors, and asked if they knew where I could buy drugs. I didn’t just say drugs, because if there’s anything more dodgy than someone knocking on your door asking for drugs it’s someone who doesn’t care what kind of drugs they are. I mixed it up between asking for alcohol, weed, pingers, ketamine, and a few other spicy ones (meth, coke, research chemicals, salvia, GHB, and barbiturates).

On a list of the most humiliating experiences a person can put themselves through, I would rank it in the top three. Reactions ranged from laughter to door-slamming, and every attempt was unsuccessful. One kind resident did give me a weed Snapchat account, and I didn’t have the heart to tell him that it was the same one I used three paragraphs ago. At least he tried.