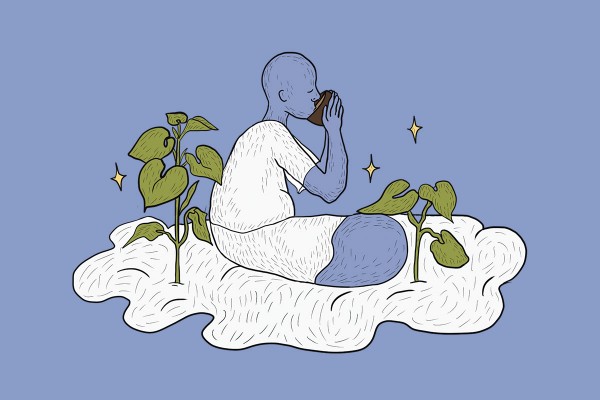 Kava: From Root to Ritual

Kava, yaqona, ‘ava, ‘awa, malok, grog. My earliest memory of this sacred substance was when I was about 10 years old, sitting cross-legged on the floor covered in woven mats in my childhood home. Family surrounded me while my uncle squeezed the brown out of the powdered root and into the water in the tanoa/kumete through a cheesecloth-like pocket of material, until every molecule of that good-good was swirling around in the water.

If you’re a child of the moana, you’ll get my vibes. If you have no idea what I’m talking about, let me tell you a bit about kava.

Kava is a plant of the Pacific, the root of which is most commonly dried out and pounded into a powder. This powder, when strained in water, produces a drink that is known to produce a sedative, relaxing feeling. I talked to my Fijian queen (my mum) and she said kava “releases stress, but it makes you super tired and lazy the next day”.

I had a talanoa with Eric, everyone’s favourite Fijian uncle over at the Pacific Islands Centre, about everything kava. “Kava is a root of a pepper plant. Piper methysticum is the scientific name. It’s just like wine, the older it is the better. So we cut them after 3–4 years, dry them in the hot sun, pound them into a powdered form, then you mix it with water and drink it.”

I remember taking plenty of sips of kava from the bilo (coconut cup) as a kid. It made my lips and mouth feel tingly and numb and made me feel super relaxed. It also made me feel like I was simultaneously everywhere and nowhere at once, very drifting-on-a-cloud vibes.

Mum told me a cautionary tale of drinking kava. “I had consumed so much in one night it took me a month to recover. I drank 15L of kava from 7pm to 2am the next day. It gave me massive headaches for a month.”

Eric talked about kava back in Fiji. “In olden days, before Christianity came, these were the systems we had. We showed respect for one another through the use of kava. For example if we’re having a funeral, people are coming to visit us and there are protocols. We mix kava to receive them. Because when they come, they come with mats and they come with money, and they come with food. So we acknowledge that, in front of the kava bowl, because that’s the culture.”

Eric touched on a key difference between Fijian kava and Tongan and Samoan kava. “Fijian kava is always different from others. Our kava is not loud, it’s quiet. That quietness makes it so different. The Tongans and Samoans shout and clap, there’s a lot of speaking, but for us, it’s very quiet. Everyone knows who’s drinking next. Everybody knows their connection.”

Eric also talked about how he uses kava today in a New Zealand context “I use kava as a form of talanoa, to engage with the community and young people. I use it as a platform to talk. It’s like a therapy session for me. There are some things you don’t share with your partner, but people can come and share that in our kava circle.”

“Kava gives us a reason to gather,” said a Tongan student. Kava is similar to food in this way. Kava acts as a catalyst for connection in Tongan culture.

A friend’s aunty talked about the importance of ‘ava in Fa’asamoa, the ways of Samoa. “’Ava is so important in ceremonies because it is the highest form of respect. A Samoan traditional welcome to distinguished guests and dignitaries is also a form of worship to acknowledge all the ancestral gods, now replaced by Christianity. Hence why we say lau ‘ava lea le Atua”. (Lau ‘ava lea le Atua loosely translates to ‘this is your ‘ava le Atua’ in English, with Atua referencing gods and spirits).

Aunty also commented on the meaning of the word ‘ava. “Ava was referred to as ‘aano a tamalii,’ usually what the chiefs do when they come together for meetings — drinking ‘ava and talanoa.” Aunty highlighted its importance: “‘ava is so central in Fa’asamoa and any special gatherings of Samoans.”

Nowadays, kava is consumed in a range of different contexts. My aunties and uncles back in Fiji regularly drink kava in the evenings, much like how parents here in New Zealand might unwind at the end of the night with a glass of wine or beer. It’s chill as.

“Kava can be used for celebration, birthdays, welcomes, acknowledgements, and we also use it for reconciliation” said Eric. Mum said that “these days most people use it more for fun, like my pa in Fiji, he consumes it almost every day with friends gathering and a little chitchat. They call it smack juice just for the fun of it.”

The best chasers for kava, as recommended by mum, include bongos (which are similar to cheezels), peanut ruffs, which are a peanut flavoured snack (don’t knock it until you’ve tried it), preserved mango skins, chuppa chups, plain potato crisps, very spicy chicken, and a 12 hour sleep. “Sometimes you suck on lollipops after each bilo consumed so you don’t have to feel the numbness in your tongue,” she said.

Mum had one last thing to say about kava and, to be honest, this applies to life in general. “You shouldn’t have too much of a good thing, especially when it has side effects.”