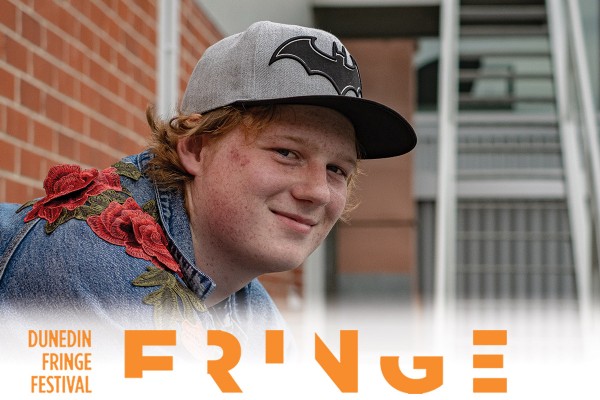 From the Parthenon to the Octagon

An Interview with Sam Pretious, director of The Bacchae at Dunedin Fringe

The first question Critic asked Sam, as we sat down for an interview in the sun, was how The Bacchae is pronounced. The answer, apparently, is ‘back-eye.’ The play is an ancient Athenian tragedy written by Euripedes, reimagined for a modern audience by a local team led by Sam.

Whilst in some senses this play has been in the works for 2500 years, Sam has been involved since last year. For THEA221, he wrote about transforming The Bacchae into a modern piece. He then decided to write the play, and “eventually decided fuck it, ya know, might as well put it in for Fringe.” So he went ahead and submitted it to Dunedin Fringe Festival, a ten-day festival of experimental contemporary art, which runs between the 18th and 28th of March.

The basic story of The Bacchae remains the same. Dionysus (the god of wine, parties, and all things Dunedin) returns to the city of Thebes to find the king has outlawed worship of him. Sam didn’t spoil the ending, instead telling me that “antics ensue, and then tragedy.” Sam describes the original characters as plot functions, without real character arcs. His team reduced the number of characters from ten, to a main cast of four, turning the play into more of a character piece. They added scenes to give each character their own arc, exploring growth, and questions about the moral obligations that come with being a god or a king.

Despite the play revolving around kings and gods, “at the end of the day it’s a family drama,” Sam said. The characters explore power struggles whilst dealing with the very human themes of alcohol, gender and sexuality.

Sam is interested in the lineage between modern and ancient Athenian theatre, but he points out that Ancient Greece is often portrayed as the birthplace of theatre, even though there has been performance art in many other places “long before Euripedes started doing his shit.”

Theatre also can’t be pushed into one small box, either. Sam discusses how different elements of performance art cross over into theatre and how there are aspects of that in this version of The Bacchae, shifting away from it being strictly a Greek theatre piece and into something that people want to watch in Aotearoa in 2021.

With a cast of actors, dancers, musicians, and a crew behind set design, costumes, lighting, and choreography, Sam emphasises that he doesn’t consider it to be his play, rather a team effort. “I feel like there is this idea that directors have to have this massive ego ... the whole point is that it’s a group process.” He doesn’t subscribe to auteur theory, pointing out that he couldn’t do the choreography, the music, or the set design. It is Sam’s first time working with a creative crew, and says the main thing he has focused on is letting go of his attachment to the piece in order to do what is best for the whole production.

When asked for any final comments, Sam told me he doesn’t deserve any of the credit for The Bacchae, and that all the credit should go to his team. He then clarified “all of the good stuff is on them and all of the bad stuff is on me.” Personally, I think it’s going to be mostly good stuff.

The Bacchae will be performed in the Dunningham Suite of the Dunedin City Library, on March 26th at 6pm, March 27th at 2pm (with a free post-show Q&A with the cast and crew), and March 28th at 2pm, as part of the 2021 Dunedin Fringe Festival. Tickets are ten dollars each.