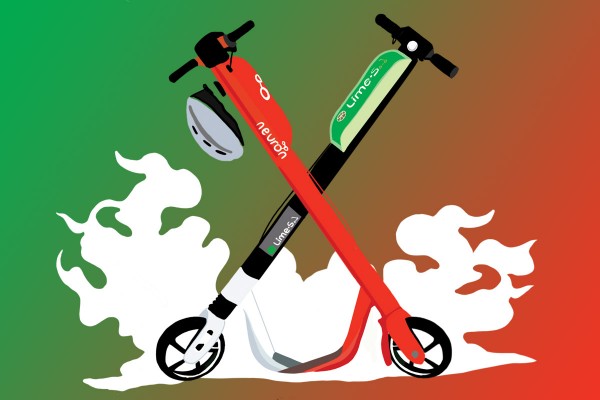 Gone are the simple days when Lime scooters ruled the streets. Scootering in Dunedin is no longer a one-horse race, with Neuron entering the fray in early January and forcing the humble Lime to upgrade, Incredibles-style, to compete. Critic’s self-proclaimed scooter expert took it upon himself to find the best ride, as well as the one least likely to be missed should it find itself in the Leith come a dusty Sunday morning.

The classic. The original. The one that started it all. The OG Lime will always have a special place in my heart for taking my scooter virginity, and while it may have been eclipsed by newer offerings, I’ll never say no to a ride on old faithful. However, I will also always complain about the seemingly randomness in which scooters can muster a performance over 20kms/hr, and I’m occasionally left disappointed by limping through the Dunedin streets at a paltry 10kms/hr and wishing I’d picked another. The Lime-S has its problems, but it’s also a great introduction into the world of scootering so don’t feel dissuaded from giving it a try.

Whenever there’s a new and improved model, it’s often compared to the original. Unfortunately, the Lime Gen4 doesn’t deliver for me. It feels like they fixed the already-fine parts of its predecessor, while still leaving the acceleration and handling with much to be desired. The increased size does make for a less fragile ride, but it feels like a missed opportunity to really improve on the classic Lime design. Don’t be afraid to drive this one off a bridge and into the Leith, because why choose the upgraded Lime when you could have a Neuron?

Neuron — “The Neu Kid on the Block”

As an avowed fan of the classic Lime, I was ready to nitpick any flaw that I could find with Neuron. Instead, what I found was an impressive evolution of the e-scooter. While substantially bigger than the Lime-S and on par with the Gen4, that size adds sturdiness and I felt more comfortable taking on rough terrain (i.e. the most uneven footpath I could find near the Uni).

A massive selling point is that Neurons can go fifty kilometres on a full charge before they run out of battery. This is more than double the offering from Lime. You could almost reach Milton, the town of opportunities, on a Neuron.

The added helmet was a welcome safety feature, something that neither Lime scooter had managed to incorporate. The two speed modes reduce the need to constantly cramp your fingers holding down the accelerate button, and when combined with the dual handlebar brakes, it makes speeding up and slowing down feel exceptionally smooth. I thoroughly enjoyed riding the Neuron and will be making the effort to use them.

If you’re looking for the best bang for your buck, you can’t go past the Neuron. Not only is it six cents cheaper per minute than Lime, the offering of a helmet (although honestly, how many of you are going to actually use it), and increased battery puts it above both iterations of the Lime. If you’re new to scootering through the streets and you’re willing to splurge that extra six cents, the original Lime is a good starting point. But when you’re ready to take it to the next level, Neuron is the way to go.