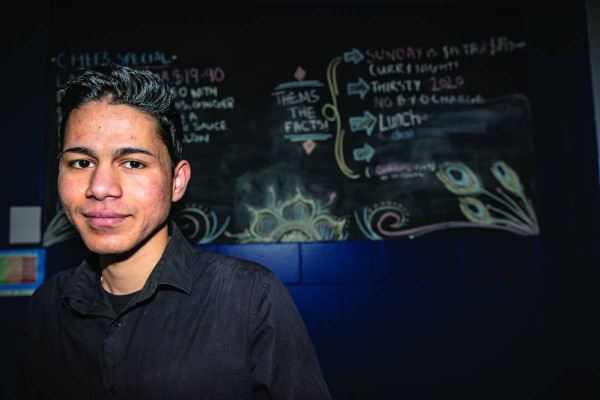 Some people say their hero is their mum. Some say Steve Irwin. Personally, I’d go with Dave from Maharajas. The dashing young manager is just as much a superhero as any of the rest. He upholds the law, serves the community, and doesn’t ask for anything in return. I’ve always been a big fan of Dave, but the thing is, I’d only ever interacted with him during BYOs. I couldn’t be sure that he was as good in real life as he seemed on the piss. I had to know.

So, understandably, I was a little nervous when I came knocking. Maharajas walls were blue(!), not red like I’d remembered.The space inside was larger than I’d remembered. But Dave... Dave was exactly as I’d remembered.

He was once a student like you and I. He’s just on his gap year. While some students would spend their gap year travelling, Dave is spending his gap year managing your local BYO. “Well, technically, it’s my third gap year.” He took his first gap year to help his family. “Just the one. And then someone else in my family had an injury, and I was needed again. So that became my second year. And this year, there’s Covid, and our chefs are stuck in India, so I stayed to help the business. You can see where this is going.”

Dave wakes up at 5 or 6 in the morning, if he’s “not too dusty”. He works until anywhere between 11pm and 2am. “Every day, I get up, and I’m excited to go to work. It’s what I love doing. I love serving people, I love making people happy.” One night a week, he gets on the piss with mates from Otago Boys. “I figure, I go hard for five straight days, and then I get a day off. So I drink until 6 am and then get a cab home.” If you ever feel like Maharajas is rushing to close, it’s probably because Dave’s mates have bought him a bottle of black label and are tempting him with it. “They know I like that stuff. They’ll send me pictures of an unopened bottle during my shift, just waiting for me.”

Some other Indian restaurants in Dunedin feature recipes from Delhi or Mumbai with added sugar, to suit the western palette. But not Maharajas. “I told my chefs to forget the New Zealand recipe, and to cook it their own way,” he said. Their chefs come from Northern India, a state called Uttarakhand, which sounds way cooler and so must therefore taste that much better.

Their infamous butter chicken estimates to pull in whopping 75% of their total revenue. “It’s my favourite joke. When I take orders, I’m just waiting for someone to order butter chicken. Because as soon as one person does, the second one comes. And then the third. I’m always sitting there thinking ‘alright, who’s it gonna be’?” For the record, it’s never me. I’m an Aloo Gobi kind of guy. Indian spice, because I need the people next to me to know that I’m tough like that. When I start sweating, Dave is always quick with the water. “I love serving people. It’s what I’m good at,” said Dave, and he’s bloody right.

His kindness has resulted in popularity. Many students know him by name. “I don’t know how they remember, but I’m honored,” said Dave, who remembered my name even though I have no memory of meeting him. Oops. “I love the Dunedin community”, said the man who spends six nights a week taking care of intoxicated students. “People know how to look after each other.”

To provide a safe space for this to happen, Dave follows BYO law. He studied Law for two years at Otago, so he’s clearly an expert. “As a student, I feel like I can connect with my customers,” he said. But as the manager, it’s his responsibility to follow the regulations.  “There’s $40,000 on the line if we get caught breaking that law. But more importantly, I feel like it’s my responsibility to make sure all of these people get home safe. I don’t want them leaving here and doing something silly that they’ll regret tomorrow.”

So when someone chundered at the table earlier this semester, Dave didn’t kick the group out. He just moved them to another table and fetched a bucket. “One of the girls in that group was like ‘oh, please don’t kick us out, it’s just him, we’ll send him home’. I think she was scared I’d trespass them or something. But it wasn’t their fault,” said Dave. “These things happen. We all have mates that get too drunk, we all know what that’s like.” He laughed about the incident and reminded me that “you need to be nice to other people for them to be nice to you”.

Maharajas has started to gain traction for their fucking good chat on their Facebook page (gems include: “Fear not, if you pass out because my devilishly good looks and cunning wit has overwhelmed your weak mortal body, I shall not let you fall. No, instead I shall humbly catch your puny body and revitalise it by merely holding you with my Currylicious hands”). Dave doesn’t run this page, that’s the job of their social media manager. But Dave attributes recent financial success to the memes, which apparently take up to three hours to create. “When we hired him, the first thing he said was that he was gonna do it his way, and we couldn’t tell him ‘no, that’s illegal, you can’t say that’. And it’s worked, people mention them all the time.”

For any other fans of Dave, I can advise you that stopping in to say hello is an excellent idea. He even knew my name - which is more than I can say for anyone I’ve ever met on the piss. Dave exists outside of the restaurant, and your relationship with him doesn’t have to end when you leave the door. He sees people walking by, and sometimes, when he waves, they look away. Dave wonders why. “You didn’t have any trouble talking with me last night.” Like a guilty one night stand, sometimes you just want to forget how much shit you chatted over a piping hot curry. But don’t. Embrace it. Once, Dave pulled a familiar face in off the street who looked upset. “He didn’t have much to say at first, but we got talking, and I found out he’d just had a breakup. But within half an hour we were cracking up together.”

Dave from Maharajas is a wonderful man with a big heart and lots to say. I’ll never forget my time spent with him. “I’ll always be here for people,” he said, as I was leaving. “I don’t judge people in any way. I’ve been all over New Zealand, and I can honestly say that Dunedin has the best people. So if I can help you in any way, please, please come here and I’ll always be here for you.” Oh, Dave.