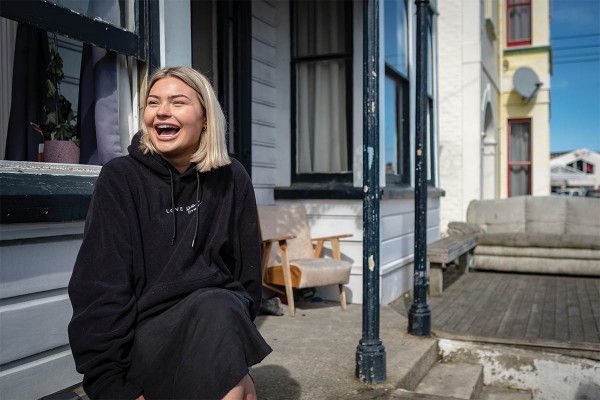 Hannah Martin isn’t a Dunedin local, but Critic is officially claiming her as one of Dunedin and Studentville’s best emerging artists. She submitted her piece, “The Creation of Dunners”, to the OUSA Art Exhibition, and describes that piece like she does her other work: it’s messy, fun, and reflects what she and her mates get up to. She also mostly paints on recycled items with “budget” poster paint, proving how someone can still pursue their passions on a Studylink budget.

Critic met up with Hannah at her flat. As she led us through her bedroom she repeated how embarrassed she was by the mess (it’s not that messy) and asked us to “please just ignore anything you see”. She forged a path through her bedroom by kicking clothes to the side with her feet, but the photographer and I were transfixed on the art she had on display. On the wall above her bed is a glass panel covered in colourful brush strokes that form the shape of koi fish. The second thing you notice is an easel with the beginnings of her next project.

Hannah is a “speed painter”. She finished “The Creation of Dunners” in just five hours, but her latest project has been taking some time. Her uni workload has been stacking up, and when asked how she manages finding time to paint, she laughed and said, “I don’t”. But despite that, there is a stack of completed paintings tucked away beside her drawers. She pulled them out to show us her work, and we almost didn’t notice that her canvases were all pieces of recycled furniture. One of the first pieces she did with acrylic paint was done on scrap bits from a friend’s unwanted set of wooden cubes. Her current work is being done on a piece of a set of drawers. “I didn’t put [the drawers] together right, I didn’t know where [this piece] went, so I just painted on it.”

Her current medium is acrylic poster paint - “budget” is her answer to the question of how the hell she affords art supplies. She’s always been a hands-on artist, has no desire to try digital, and for a time used oils, “but oils take so long to dry and they’re so expensive”. She almost always uses reference images, too. “The Creation of Dunners” was made using a reference of her boyfriend’s and a mate’s arm one night, and inspired by a tattoo that a friend has on her back, which she said for ages she was committed to painting “one day”. She admitted that the original reference was a bottle of DB which she swapped out for a Speight’s, and said staging a photo with the best lighting was “a whole ordeal”, but paid off.

But not literally paid off - yet. The highest offer she’s had on “The Creation of Dunners” is $500, but Hannah wants to paint something “just as cool or better” before she parts ways with it. She enjoys experimenting with her style in pursuit of her “niche”, but loves the “messier style” of depicting things she and her mates get up to.

For now, painting is something she does in the rare time she is free from uni work. She is diligent about keeping her studies as a Geology and Geography student separate from her art, because to her, art is something relaxing. The same cannot be said for assignments.