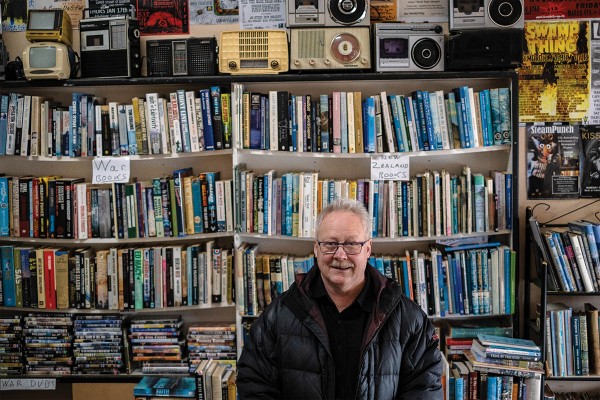 Walking down King Edwards Street in South Dunedin you pass bustling cafes, second-hand stores, and various offices. Standing out is a storefront full to bursting with books and music. “BOOK EXCHANGE” reads one side in bright yellow, “Zodiac RECORDS” reads the other. I spent years as a teenager here in the 2010s, buying up cheap thrash metal records, cassettes for a beaten up ‘95 Corolla, and Frank Herbert books. I came back to see whether much had changed since then.

Zodiac opened 20 years ago as an antiques store and book exchange, but with the advent of TradeMe the stock was put online for sale and the antiques side switched to a DVD store. About 10 years ago, vinyl was added to the roster and the full book/record/DVD store of today began. “I never looked back,” owner/operator Jim Lloyd told Critic.

Jim himself is an avid collector. His own personal home is brimming with various treasures. You can see that passion in Zodiac Records. Atop cabinets are a wide array of radios, record players, stereos, Walkmen, and boomboxes ranging from ornate wooden 1930s radio sets to ghetto blasters and modern CD players. “It’s all my own collection,” we’re told. Often it’ll be Radio One playing over them in the shop, he likes breaking up the mainstream stations with it.

While the antiques have long since gone, the Zodiac book exchange remains a fixture in South Dunedin. It’s the mainstay of the business, and with no dedicated book exchanges or second-hand bookstores between South Dunedin and Invercargill, it’s one of the southernmost in the country. The exchange operates remarkably similar to the now all-but-extinct video rental industry, with customers bringing in and taking out books with an exchange fee of $2-3. The same goes for the DVDs, bring one in and take one out with a $2 exchange. The model is simple, unlike a rental store there’s “no names, no addresses, no time limits, no nothing”. While the books are for sale, 90% of the stock circulates among the community through the exchange.

A decade back, the future of the exchange was put in question by the growth of the eBook industry. However, the ephemeral nature of eBooks, the industry usually trading in American dollars, and the recent addition of GST on eBooks left Jim with the impression that “they were a passing fad”. Today the Zodiac exchange is standing strong as ever. A lady came in with two bulging bags full of books for the exchange just during the interview. Jim said she comes in every fortnight.

When it comes to the DVDs, Jim thinks people stick with them because they like having something to show for their interests. “I think people like something materialistic.” While people have Netflix and other streaming services, there’s something that can’t be replicated about being able to hold the film in your hands. You gotta have something in your house, and there’ll always be a place for a bookcase stacked with books, records, and movies.

According to Jim, it’s the classics and cult films which draw the customers in for DVDs. Westerns especially are a strong mover, and Jim’s built up a massive collection over the years, with thousands of books in the genre alongside the DVDs. They tend not to sell, with locals keeping the collection in constant circulation through the exchange but never buying them up outright. Some locals will exchange 60 of them at a time with Jim, keeping the shop consistently stocked with the genre. Some genres— sci-fi and classics especially— tend to sell rather than exchange. But with people often dropping off new books the overall stock is constantly growing. 14,000 of them take up half the shop on tightly packed shelves.

Although TradeMe is arguably Zodiac’s arch nemesis, it still makes up part of the business today - with Jim listing 2,000 DVDs. The records don’t need to go online to sell, and CDs are too much work and don’t sell well online. While cassettes can be sold as collectibles, it’s DVDs that are the money makers. Though they couldn’t be shipped over Level 4 lockdown, the moment the country went down to Level 3 the online DVD sales “just went nuts” and boxfuls needed to be sent daily.

The music side of the business is entirely for sale without the exchange element, and has been coming back over the last few years with the resurgence in physical music media. Jim has been in the vinyl business for a decade now and it attracts the widest array of customers, who skew younger. Cassettes, by contrast, have become more of a collector’s item these days, the buyers generally being older. While they tend to go towards collectors, retro car enthusiasts and those who’re renting a car or cbf getting a newer stereo still keep cassettes moving off Zodiac’s shelves.

Jim reckoned that CDs are in the position today that cassettes were 15 years ago: not quite old enough to be retro but outmoded in favour of entirely online music platforms. But they still sell well at Zodiac. For Jim, it’s due to vinyl becoming so expensive in recent years that CDs are the cheap option for those who want to physically own their music. A decade ago he couldn’t sell CDs, but with vinyls rising in price they’ve made their own comeback. In just over the past year and a half, Zodiac sold more CDs than every other year of the business combined. CDs go for 3 for $10, which is cheap by any measure, while vinyl might go for upwards of $30 a record.

Jim doesn’t let taste bias what music he stocks, and will buy up just about anything in good condition that gets brought in. If someone comes in with a collection of records after clearing out their house, he’ll buy the whole collection. The key is serving a broad array of preferences across genres. They all have a place among his customers. “If you’re a record store you’ve gotta do everything. You gotta do all sorts of records, all sorts of tapes, all sorts of CDs,” he says. That spread brings in local characters and genre fanatics through the doors, not to mention the clearly underappreciated cowboy enthusiast scene in South D. Overall the DVD buyers tend to be locals in South Dunedin, with record buyers coming from across town.

Jim said he has seen a lot of changes come and go in South Dunedin. “Most of the shops have shut down. There’s no antique shops around, they’ve all closed down because of TradeMe and the way things are. I’ve managed to keep going and changing things. I don’t know what the next move is, or the next move is I’ll retire.” But there’s no plans for that yet, he loves the shop and the people that come in, and he still looks forward to coming in each day.