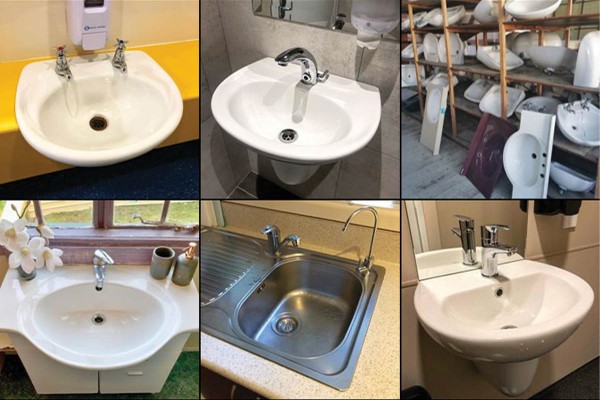 An Exclusive Interview with @sinksofdunedin

@sinksofdunedin, a novelty Instagram account for documenting and rating various sinks around Dunedin, has experienced a meteoric rise to fame since they created their account in late June. Currently, they have over 1000 followers, and 70 posts. On their account, they post glossy, well composed photos of various sinks—kitchen sinks, bathroom sinks, art-deco sinks, post-modern sinks, structuralist sinks, sinks with clam shell basins—you name it, the anonymous @sinksofdunedin (we’ll call him Mr Sink) has probably reviewed it. A person of wide tastes, Mr Sink is filling our feeds with the sink content we didn’t even know we needed.

In a Critic exclusive, under strict anonymity, the elusive owner agreed to sit down with us to discuss how they were coping with fame, what makes a good sink, and to finally answer the age-old question: when does a sink become a bathtub?

The idea for @sinksofdunedin came about as “a fun way for me to express myself ... Something to have fun with [as] the stakes are really low.” Mr Sink said that they run several other personal and work-related Instagram accounts which they have to put effort into and take seriously. “I kind of despise my other Instagram accounts,” they admitted. For Mr Sink, however, “it’s easy to generate the content, because everyone encounters sinks ... it’s not super subjective. I don’t have to put in effort to find [a sink], or even give [it] the arbitrary sink rating.”

“The reason it started was because I had been going to Pequeño for years, and they have the worst sinks in the game … [@sinksofdunedin] is a way for me to vent about shit sinks.”

For Mr Sink, a shit sink is one with a bad faucet to basin ratio. “When you’ve got tiny-ass taps in the corner or a huge basin, and you’ve got to mash your hands against the back of the basin…” Here they trailed off, and gave a small shudder.

They admitted, however, that @sinksofdunedin could have been “anything. ‘Leaves of Dunedin,’ or people have ‘garbage of Dunedin’, or now there’s @toiilet, which on the record I would like to say would be nothing without [me].”

For anyone who doesn’t know, @toiilet is a similar novelty Instagram account, which posts pictures of and reviews toilets around Dunedin and other locations. Famously, @sinksofdunedin and @toiilet had a rivalry at the beginnings of @sinksofdunedin’s career. Now, however, they are “anonymous friends. I don’t know who they are, and they don’t know who I am, but we work in beautiful harmony now.”

Mr Sink revealed that the two talk about anonymity and how they each cope with “the fame and pressure to succeed”. Mr Sink told Critic that they do not plan on ever revealing their identity.

@sinksofdunedin “brings other people joy”, Mr Sink said. There is a lot of support and engagement, but - humble as ever - he said that novelty Dunedin Instagrams are “a dime a dozen”. They gave a shout out to @dogsofdunedin, @catsofdunedin, @toiilet and @ducksofdunedin. “I have respect for other content creators of that vein”, Mr Sink said. “It’s not that hard—you just have to think of something ridiculous.”

“I actually only do things for as long as they interest me, and once the novelty and energy wears off I care no longer for it.”

When asked exactly why they thought @sinksofdunedin was so popular, they said that “people like a reprieve on their feeds from the horrifying shit you see happening with [Covid-19] in the United States in particular, or how Australia and the U.K have incredibly warped political systems. People are feeling so disenfranchised that a novelty account that has no say in current events is sort of relieving.”

Mr Sink likened it to “a mental balm, where you get home from a long day of work or study and think ‘ah, the silly sinks are back’”.

They even get community submissions, although most of the photos are their own. “People will get on the piss on any given night and send me unsolicited photos,” they said. “[They’re] either really nasty sinks at a flat at a house party, or a vomit filled sink at the bar or club or something. I love getting submissions, especially if they’re unsolicited.”

Not everyone is such an avid supporter though; @sinksofdunedin was called out by a local coffee review blog, who apparently called them “tasteless”. Mr Sink didn’t take it personally though. “I was bemused by their snobbery, and I thought: that’s pretty rich coming from an account with only 140 followers. I think people who take themselves too seriously on social media need to be taken down a notch.”

So, what makes a good sink? For @sinksofdunedin, “it’s experience driven”. That’s why sinks in business buildings or commercial areas get high scores, because they’re designed to be as functional as possible. Sinks that are designed for form over function therefore get a lower score, but “people get up in arms about it, because they’re beautiful to look at. So sometimes I will submit the score for review on my stories.”

Sinks aren’t even the only source of controversy on the page. “Recently, someone got up in arms because I had a pro La Croix stance, and I took it public … it’s kind of fun playing with people’s emotions,” they addedly slyly.

Mr Sink’s idea of a perfect sink is either a “perfectly circular basin … or a really brutalist, structuralist basin that is aggressively square with sharp angles, and a tap that looks like the gun on a tank. It’s big, it’s efficient, and it’s really gonna wash the shit out of your hands.”

Finally, it was time for the question that had been on everyone’s minds. When does a sink become a bathtub? “I’m really glad you asked,” said Mr Sink, with a laugh. “A sink that gets bigger and bigger turns into a bathtub at some point, but there’s no finite measurement … when you’re a child or a fun-sized dog, you can use that sink as a bathtub. Is it a bathtub? It is for the kid or the dog, but it’s a sink in everyday life. You could technically use a bathtub as a sink.” When pressed for an answer, though, they said “I’m not willing to stake a hard definitive stance”.

Their final word: “Sinks can be art, and art imitates life. I like them for the experience, but for me it boils down to functionality.”

“We are all #sinkheads. I take submissions; but just try a little harder with your photos.”