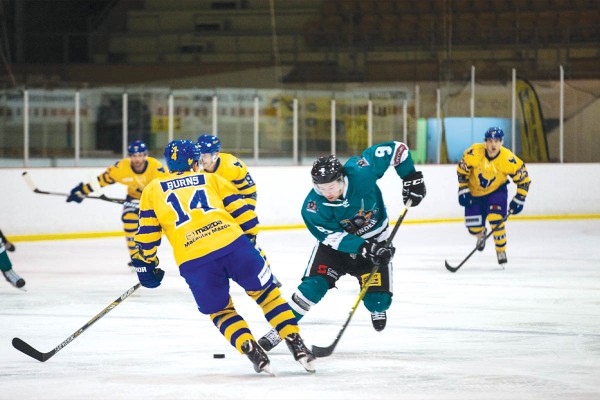 The Dunedin Ice Stadium: The Hottest Coldest Place in Town

When I was deciding where to go to uni, I googled ‘best ice rink in NZ’. Apparently it’s in Dunedin, so now I’m in Dunedin too. Our rink offers ice disco nights, quiet midday sessions, live hockey, skating lessons and curling, all with a beach on the doorstep

Somebody once thought “y’know what we should do? We should strap knives to our feet and go out on that frozen lake”, and I want what they were having. The Dunedin rink team took it one step further by adding disco lights, which I thought was a nice touch. Their disco sessions are pretty hectic, and great fun. Head down next Friday or Saturday night to give it a shot.

The rink is further away than the Octagon, which puts it outside the pitifully small territory a typical student is willing to explore for fun. Critic talked to Paris, the rink manager and former Ice Blacks player, about why students should make the trek to St Kilda: “Some students spend three, four years in North D and never leave. That’s a shame”, and he’s right. Strap knives to your feet. Live a little.

There’s four hours of public sessions starting at noon every day except Monday. Friday and Saturday night sessions that get a bit rowdier, and Saturday and Sunday morning skates pair well with long walks on the beach. It’s a great way to get out of the flat and experience something new, rain or shine. “Once people actually get out here they have a great time.”

Plenty of people don’t want to go because it’s far away, which is dumb. Plenty of other people don’t want to go because they’re worried about falling over, which is also dumb, because if you can fall while drunk, you can fall on ice. According to ice-expert Paris, the first time you go “it’ll be 20 minutes of falling over and then you’ll be fine”. Critic says the danger makes it fun.

Critic spoke to one first time ice skater about his experience: “I’m so glad I came. I fell heaps, but I figured out how to get moving by the time we left. Wasn’t nearly as hard as I’d thought it was going to be.” Critic spoke to another first-timer, but all she had to say was “bleshgo”.

If you’re a skier or snowboarder, you’ll learn even quicker. After his first time, Dusty tells Critic: “You steer the same way you snowboard - with your fuckin’ shoulders. So I got the hang of it. I thought I was ready to leave, but as soon as I was in the car I was like ‘damn, why am I not on the ice’?”

The rink offers brand-new rental skates, so you won’t be lacing up a pair of boots that stopped smelling nice sometime in the mid 80s, and if you’ve never been to a rink before, just know that that’s pretty special. If you want to learn to skate, there’s a student tutorial session starting in the next few weeks, so there’s no time like the present. Head over to their website to check it out.

If you’re not keen on the idea of skating, the rink has other options. Curling is popular amongst post-grads and older folks, but a student team would be a welcome addition. “You’d be surprised at how competitive that gets.” Side note: we’re pretty sure that the easiest way to get an Olympic gold medal is as one of those professional ice sweepers on the curling team, so get your practice in now if you’ve got “Olympian” on the bucket list. Can’t hurt.

Now that the rugby season is winding down, you might be itching for some more live sport. The Dunedin Thunder have a few ice hockey games coming up this season including one on September 11. It’s a hell of a lot cheaper than a ticket to the Zoo, and if you’ve never seen ice hockey played live before, you’re in for a wild ride. For $9 you get access to 2 ½ hours of the fastest game on the planet, accompanied with mulled wine and a bar, if you’re into that sort of thing. Bonus: you also get to see what may be the highest concentration of mullets in Dunedin.

Next time you hear someone’s going for a surf on St Kilda, hitch a ride and give the rink a go. Or grab a $2 bus trip.