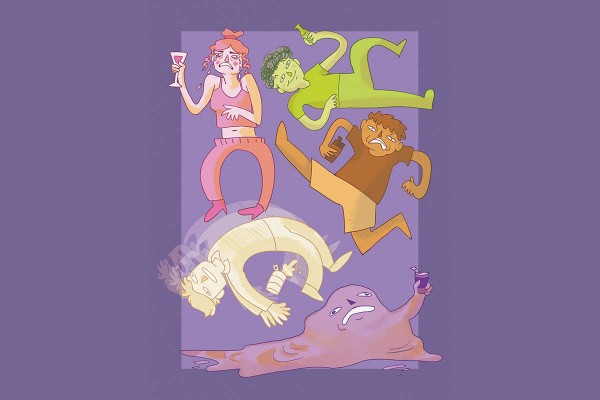 Tasting the Rainbow: An investigation into which coloured alcohol fucks you up the most

Picking out a weekend beverage can be stressful, but there is generally one common consideration: alcohol content versus cost. But there is a danger in living life that way - not all alcohol is created equal, and people swear that different types will affect them in different ways. Where one drink will make you loopy, another makes you tired, or cry, or forget a whole night.

Well, I have a theory. I believe these experiences can be traced back to one specific factor. Colour. Not to sound like your year 13 English teacher or anything, but colour is an incredibly important metaphor which can generally determine the fate of one’s evening. For the sake of the future of your every Friday night, and after serious experimentation, analysis and consideration, I present to you the definitive ranking of which colour of alcohol fucks you up from least to most. The factors which have been taken into account throughout this investigation are that of taste, cost, feeling and overall experience. I would take this to be more of a warning than a guide.

Although green is a colour which is generally associated with toxicity, germs, disgust and the Grinch, it is perhaps the most innocent flavour of the rainbow. Take for example green apple Scrumpy. This doesn’t fuck you up. If anything, it just incinerates your throat and makes you a little bloated. Sure, it’s cheap, but it’s pretty useless in the grand scheme of things. Similar story goes for lime Cruisers, which are basically just sugar water and food colouring. It’ll get you a little silly on the dance floor, but it does not make for a transcendent experience. Same goes for straight green spirits. Look at Midori. A whole bottle of Midori which will set you back $40, and is only 20%. 20% may seem like a lot when it comes to an assignment, but not when it comes to alcohol. It is economically and physically inefficient. Overall, green is the colour of an innocent beginner beverage.

Taste: the rotting melon in the back of your flat fridge

Overall Experience: A quiet night in on St Patrick's day

Pink is green’s bitchy counterpart. It appears to be fruity and innocent, but will fuck you up emotionally more than physically. Take Gordon’s Pink Gin RTD as an example. Each can is only a single standard drink, and appears to be one of fruity sophistication, but it only takes a few meagre cans before chaos ensues. Same goes for Rosé. You can usually get a cheeky bottle with an average of 7.9 standards for around $12 to accompany you at a BYO. The first half of the bottle goes down a treat. The taste is juicy and rich, the colour aesthetically pleasing, but the flirty fun feeling only lasts for so long. By the time you get to the bottom of the bottle, there is bound to be tears. Pink spirits are like the Beverly Hills housewives of alcohol. Take a look at the Bailey’s Strawberries and Cream Liquor. It’s expensive (a whopping $33 for 17%,) low in standards, and tastes incredibly artificial and obnoxious. It’s almost as if pink alcohol was put on this planet purely to stir shit. But, a little petty drama never hurt anyone, and it always makes for an interesting evening for those who are spectating. Also, if you do throw up for whatever reason, at least your vom will be pretty.

Clear or white alcohol is the most deceiving of them all. It’s pure and harmless on the outside, but it sneaks up on you faster than student debt. White alcohol is the type of alcohol that completely makes you forget your limits and tolerance. Maybe it’s because it generally tastes like diluted lemonade and slides down your throat like nothing. While drinking white alcohol, you feel on top of your game, completely in control. But you aren’t, you’re just being foolish. A premium example of this is literally any low-sugar soda RTD, like Great Whites, or Long Whites, or Tui’s vodka, lime and soda. They’re easy to sink and at around mid-$20s a pack, a justifiable expense on a night out. The red flag is that it takes so long for the alcohol to kick in that after a few bad boys, poor choices aren’t too far away. To quote a fellow flatmate, a night on Tui’s will make you feel “just straight up memory loss”. But the fairest, and most fucked of all is without a doubt a cheap white wine. Any cheap white wine will do the trick. Just the thought of its bitter existence going down one’s throat should be enough to trigger a tak-yak. To finish it off, I will leave you with this statement from a Sav drinker: “It makes me feel like a freak, like I’m gonna get white girl wasted.”

Overall Experience: Out of body

Darker alcohol is perhaps the foundation of this fine nation, being a businessperson, bogan and breatha staple across the land. Dark alcohol comes in many shapes and forms, and is for sure guaranteed to give you an experience like no other. Darker alcohol is never alone, generally being the second half to some kind of dynamic duo. Take for example Billy Mavs. For $30 you can get 18 cans at 7% each, a respectable deal. Once a Billy has hit your lips, it hits hard, and the switch in your brain to stop you from sinking a whole box is immediately turned off. According to one consumer, they turn her “straight into a ‘bruh’ girl” in an instant. Woodstock - Billy Mav’s angry cousin - also has similar effects. If you’re going to get in a bar fight with a conservative boomer, chances are the both of you are on Woodstocks. Slightly on the cheaper side, going at $23.99 for a 12 pack, Woodstocks will unleash a side of you that you never knew you had. The classier, yet just as chaotic, side of this family is rum. Take Coruba Rum as an example. Coming in at $41.99, and 37.2% it is a little more on the expensive side, but it provides a more sophisticated experience. In terms of fucking you up, it’s more of a slow burn love. It takes a while to feel the full effects of rum, but in the end it wraps around you like the arms of a stranger in Catacombs. Dark beverages will leave your mind, body and soul kind of fucked up. You will forever be in search of the brain cells you lost along the way.

Overall Experience: Either a full send with your rural cousins or an evening at Pequeno. There is no in between.

Whoever the fuck invented purple alcohol needs serious help. It’s probably easier to just accept your impending arrival at the gates of heaven than take a single sip of this godforsaken substance. Dear God, if you’re one of the poor souls who fall for this tomfoolery, my thoughts and prayers are with you. Purple alcohol is generally advertised as some kind of delicious, berry-flavoured fun. Take for example blackcurrant and apple vodka Cruisers. A 12 pack costs a humble $21.99 and they come in at 5% each per bottle. This drink seems innocent, but that is your first mistake. Say goodbye to your memory for the night. Also, what’s the go with Purple Goannas, who invented those motherfuckers? According to their advertising, Purple Goannas are a “refreshing soda that is best served chilled and straight from the bottle”. This is perhaps the biggest lie modern society has ever heard, because you may as well just drink cough medicine. A 12 pack of Purple Gs costs $25.99 for a 12 pack, which is ridiculous considering the state of this substance. However, there is one truthful trooper amongst these repulsive units. Turns out, there is a drink called ‘Purple Death’ which falls amongst the Port family. It’s literally advertised as being “rough as guts,” and is apparently best drunk “with teeth clenched to avoid foreign bodies”. At least someone is being honest here. It’s also only $23.99, so it’s easy on the wallet, but not the body. Please, my tender body.