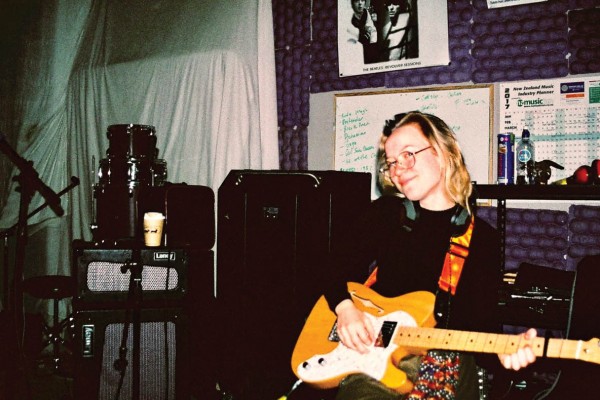 Writing about music can be hard sometimes, much like a perfume commercial - how do you convey a sound, a smell, a sense? But to me, listening to Neive Strang is the same sensation as the first sizzle of onions in a pan. It’s delicious, intoxicating and it’s only the beginning. The 19-year-old sat down with Critic to talk about her latest album, Moon Life, and what’s next for the dynamic artist.

Neive grew up in Dunedin, studying at Logan Park. “I’ve just always sort of been doing music since I can remember,” she said. Her band, Painted Blind, placed second in the Smokefree Rockquest and won the Apra Lyric Writers Award, with Neive snagging the Smokefree Vocals top award. However, she made the decision to go solo to focus on herself and her song writing: “I definitely had a lot of ideas that didn't fit with the band that I just wanted to explore on my own kind of thing.” In year 13, she released her EP ‘Expectations’ to critical acclaim by the ODT. She’s currently studying horticulture and enjoys making mosaics in her spare time which, let’s face it, sounds fucking cool. Neive describes her musical influences as Lucy Dacus, Ron Sexsmith, Julia Jacklin and Sharon Van Etten, but admits her taste is constantly changing.

Her album, Moon Life, was recorded between “a funny little room at King Edward Court” and her dad’s house. Produced with Adelaide Dunn, Neive plays the rhythm guitar and piano on the album, whilst her dad plays the drums and her partner, Jack, plays the lead guitar and the bass. Over the course of the year, the album began to take shape, inch by inch. “The song writing process can take ages,” says Neive. “Like, I can come up with a verse, and then sit on that for like honestly like up to a year and then come back to it and then I'll finish it.”

Sitting somewhere between indie-rock and folk-pop, the album is best listened to on a long walk against moody skies. Moon Life is a collection of emotions; from the brilliant indifference of “I Don’t Do This for You” to the drunk 2am sadness of the title track “Moon Life” and the bored, bitter edge of “I Need Water”. “A lot of the songs were loosely inspired by mental health,” Neive says.

In her music video for Paradigm, her lead single, Neive sits on a chair in her room, tapping black Doc’s against floral carpet. “We’ve got a whole lot of time to be alone in this paradigm,” she sings on the chorus. It’s achingly personal yet simultaneously detached, her gaze cooly piercing the camera. That sentiment lingers in Neive’s work, which she says, “a lot of it definitely comes from a personal place, but most of the time I’m also writing about other people's experiences”. Taking inspiration from friends and family, Neive inserts herself into their perspectives and intricately dissects it. When you listen to a song, you’re never entirely sure what’s Neive and what’s Other. It’s an eerie feeling.

Neive’s planning on staying in Dunedin for the foreseeable future (“I was actually thinking of moving to Wellington, but it's just way too expensive and just not worth it”) and work in gardening whilst pursuing music part-time. She’s torn between releasing singles from Moon Life, or releasing a new album, despite only publishing Moon Life at the start of June. “I haven't just stopped writing music, I'm still writing,” she laughed. “It's a fucking wait so we'll see, we'll see. But I definitely will be releasing new music.” In the meantime, stream/dance/cry/walk to Moon Life. Smell the onions.