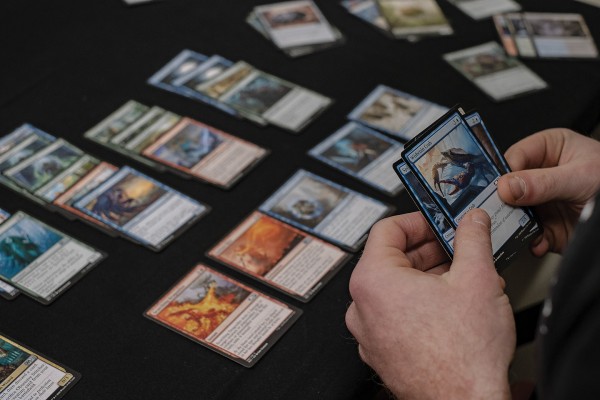 Gregory Mansfield probably came out of the womb wearing a DuelDisk on his arm and Exodia in hand. At an older age, Gregory and his mates got back into YuGiOh! and all of its nostalgic glory. They were hooked on watching card unboxing videos, making their own decks and competing in and judging local events. Now, YuGiOh! (among other table-top games) has become a part of  Gregory’s full-time job.

Under the name "Dice Jar Games" Gregory hosts a shop that caters to the communities of card games such as 'YuGiOh!', 'Magic: The Gathering', 'Pokémon' and 'Flesh and Blood', as well as for Dungeons and Dragons enthusiasts.

Walking into Dice Jar Games is pretty fucking cool. There are shelves stacked full of bizarre wonders, card-sleeves, board games, Dungeons and Dragons collections, floor-to-ceiling arrangements of ‘Pop!’ Figures, tables set up for one-on-one duels, and hundreds of packs of cards, from all over the world. Owner and Director Gregory Mansfield was just getting ready for a busy week ahead when I, overwhelmed by nostalgia, forked out and bought a pack of Legendary Duellists: Immortal Destiny. It was only $4 -  cheaper than a bit of Sushi from Great Taste and filled with half as much cardboard.

I unpack an ‘Evil HERO Malicious Bane’ priced at $100NZD, and I am fucking stoked. The ruggers might be losing me money some weekends on the TAB, but unpacking a powerful card will net me a crisp hunnid, once I sell it to one of the many fine gentlemen or ladies of the YuGiOh! community, of course.

What came next was a duel with Gregory himself, for both the card and my life. He was a proper gentleman, and not only did he spare me from the Shadow Realm, he flexed his fluency in the card games that he hosts and sells. I was blown away by the commitment that Greg has to this business - to be honest , I can barely remember what a 5 is in ‘Kings Cup’ as it is.

YuGiOh! is older than most students at Otago Uni. Founded in 1996, the card game, manga, and TV show remains one of the most successful brands in history. Even if you’ve never played it, you'd recognise it.  The community that gets amongst this card game are next level punters , and through this shop, Gregory is providing a communal space for table-top gamers. To meet their demand, he has linked up with top card distributors for ‘Magic: The Gathering’ and ‘Flesh and Blood’, among others. Initially keen to set up a website for the sale of cards, Greg was surprised to find out he would need a store/base/headquarters to facilitate his budding empire.

“Honestly, I wouldn't call myself a risk taker,” he said. That obviously hasn’t stopped him, though. He said that if he wanted to get in the business of card dealing, it was to get a shop or bust. “I knew [setting up a shop] would be a massive undertaking but I knew it would be for the best.” Humble to the core, it's rad that this dude can handle a store, all of its administration, whilst maintaining so many communities.

One dueller described Greg as "pretty legendary - that he holds it all down, he's pretty cool dude". Another told Critic that "with [stores] closing down, plus Covid happening, there was a chance some players would be put off playing [physical cardboard cards]. The timing of Greg opening [Dice Jar Games] was perfect, to save the community, and bring everyone back to the game."

Although lockdown postponed his opening, the suspense paid off. The eventual open day event was a massive success. Gregory admitted that he had people come up to him, recognising him from his stall at the Edge of the World expo earlier this year. Clout.