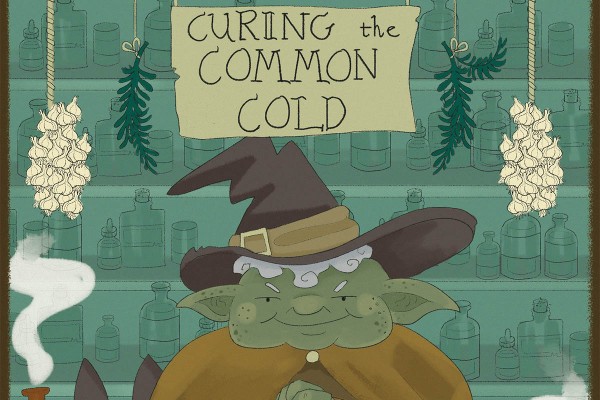 I’m sitting in my room with a friend, having a perfectly pleasant and innocuous conversation when I feel it. The little tickle in my throat. The wind in my windpipe. There’s a little moment where I think it won’t happen, and then it does: a sneeze, a cough, another sneeze and a sniffle. The trifecta. It’s the beginning of a cold.

...except it wasn’t. Turns out I had tonsillitis. But it got me thinking—cold and flu season is upon us, and you don’t need me to tell you how awful it is to juggle assignments, lectures and tutorials while being sick. Even worse, being sick means that you can’t even get on the rark after a long week to make up for it. Student Health appointments are always booked out, and most of the time you end up paying $10 of booze money just to be told to “drink plenty of fluids and rest”. Cool.

But what if there was another way? What if there was a way to cure the common cold? Impossible, I hear you scoff. Decades of modern medicine has proven there is no cure, and there never will be. However, this view does a great disservice to the centuries of traditional medicine that have developed in every culture all over the world. If you’re desperate enough to try any of these, Critic has compiled and tested five cold cures, and we found that some of these might even work.

This cold cure was dubious from the start. We used the cheapest whiskey money can buy, and standard Bell tea. To make this drink palatable we also added copious amounts of honey, which improved the flavour but didn’t mask the overwhelming taste of alcohol. The consensus was that the honey and hot water was “soothing” but that the whiskey was an unnecessary addition. One test subject described the taste as “an old tea bag that has begun to mould to the cup”. Another said that their throat felt soothed as the drink was going down, but the aftertaste immediately negated that effect. However, if you’re sick but still want to make an appearance at Pint Night, this drink might be the way to go. You probably won’t cure your cold, but getting drunk will make you forget about it for long enough to have a good time. Will probably prolong your suffering the morning after though.

If you can stomach some straight vodka, the idea behind this one might be to sterilise your throat a bit. This cure elicited lots of retching, gagging sounds from one of our test subjects, but “despite all the sounds I just made, I really rated it”. This cure is apparently akin to a religious experience, as it “felt like almost drowning,” but it did make our test subjects’ throats feel better, though that might just be from the numbing effect of the vodka. Again, if you want to get drunk this might do it for you, and the burning sensation it provokes is like deep heat for your throat. It’s also a good excuse to stockpile alcohol for future nights on the piss—ah—I mean, future cold cures.

Although disgusting, this cold cure might actually be the most effective. Our test subjects felt their sinuses clearing almost immediately, but be warned, the burning sensation of raw garlic did hurt their tongues and activate some gag reflexes. However, if you’re not a wuss, this cold cure definitely improves throat-feel. It’s a culinary sensation for sure, but garlic does have lots of antibacterial properties, and the proof is in the pudding: our test subjects felt their colds improving within seconds. Additionally, the burning sensation of the sandwich continues the whole way down your upper gestational system, effectively becoming Vicks VapoRub for the inside. Whatever space you prepare and consume this delightful snack in will definitely smell like garlic for the next three years, and the taste and smell of it will take hours to go away. However, this is potentially a positive as it will drive any vampires in your vicinity away. It will also drive all of your friends and family away, but sometimes some alone time is all you really need to recover.

This cold cure involves rubbing some garlic on the soles of your feet and then putting socks on and going to bed. The effectiveness of this is debatable, with one test subject stating that they felt cured, and another one saying they felt no difference. One positive effect of this cure is that it will remind you to wear socks to bed, and will also induce you to do laundry.

This cold cure comes from Russia and Ukraine, and involves beating a raw egg yolk and honey or sugar into half a cup of warm milk with a teaspoon of unsalted butter. Full disclosure, this drink slaps. It tastes like custard and it will take every inch of your willpower not to down within seconds. However, our test subjects did note that it had a weird consistency, with one noting that the texture was “kind of mucus-y”. It didn’t do much in the way of curing the cold, with the soothing effect lasting milliseconds. Our version was too thin to coat our subject’s throats, which is really the whole point of a cold cure. However, we did use plant milk instead of dairy, and brown sugar instead of honey. The addition of these thicker agents might make the drink more effective. If you’re lactose intolerant, this one might not be for you. Or maybe it could be, we all know lactose intolerance hasn’t stopped anyone from consuming dairy in the past.

Overall, our experiments showed that the raw garlic sandwich was by far the most effective cure. Sometimes you gotta do what you gotta do. Pussies might opt to just suffer through the cold, but those of us with stronger willpower know—five hours of vampire repellent power later, and you’ll be ready to take on the world again.