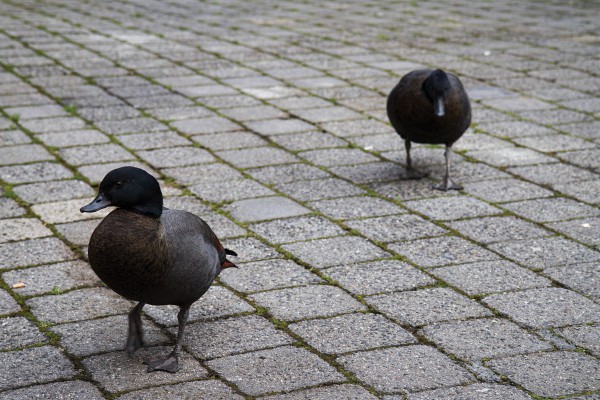 Disclaimer: Please do not harass anyone mentioned in this story. Everyone is just doing what they think is best for the boys.

Bill and Bill, the iconic gay paradise ducks that liked (PAST TENSE) to chill out on Union Lawn, were controversially uplifted and relocated by Bird Rescue Dunedin after they waddled beyond their usual territory and into potential danger.

An eyewitness, Shannon, saw “a guy” feeding the ducks rice from his rice ball as he walked off campus, luring them away from their usual spot and into the realm of Otago Daily Times photographers looking for human interest stories.

“They weren’t in distress or anything,” Shannon said, but she did acknowledge that the rice ball was the reason the ducks strayed further than usual. She thinks the rice ball guy stopped feeding them around Kiki Beware on George Street. According to Shannon and others, the Bills stayed there for the next few days. Student and George Street resident Asia, said she heard some “quite ominous” honks from the ducks at night.

On Tuesday 14 July, Critic spotted an Otago Daily Times photographer taking glamour shots of the couple as they dined at Kiki Beware.

The glamour shots of Bill and Bill were published in the Otago Daily Times on Wednesday 15 July in an article titled “Paradise ducks no stranger in an unusual habitat”. The online article included a video of the ducks being fed a single chip from McDonald’s and being confronted by a human baby.

Bird Rescue Dunedin were contacted by members of the public “out of concern for [Bill and Bill’s] welfare” after the ODT article was published. The organisation launched into action to save the birds from potential danger.

Critic has accused the author of the ODT article, John Gibb, of being inadvertently responsible for the relocation of the ducks. That conversation was swiftly ended when it was revealed that John Gibb was a Critic Editor “decades and decades ago”. The betrayal was too much to bear. John turned the tables on Critic and said that we are also to blame for giving the Bills a spotlight.

A spokesperson for Bird Rescue Dunedin told Critic that the ducks were wandering because they were “looking for mates”, as it is approaching breeding season. According to the spokesperson, paradise ducks mature at two years old. When Critic informed her that students thought the ducks were a homosexual couple with each other, the spokesperson said that a move to the lagoon of lady-ducks gave the ducks “a choice”.

“[The ducks] will return if they choose to or find mates, it will be their choice.”

But a student contacted Critic with photographic evidence that suggested Bill and Bill are not sexually attracted to female ducks. The student lives opposite Alhambra Rugby Club, a popular hang-out for the Bills. “During lockdown, they were there pretty much every single day,” the student said. “There was a female paradise duck who tried to get with them and hung round for literally weeks,” she said.

The Bills rejected the female’s advances. “There’s no doubt in my mind that [Bill and Bill are] a couple,” the student said. “Like this female was trying and trying [to get with them] and they were completely uninterested. They don’t want girlfriends, they just want each other.”

Bird Rescue Dunedin believed that the Bills should be able to choose to explore their sexuality and breed. They said it is not unusual for male paradise ducks like to wander around together, on a kind of OE, while they are looking for potential mates. In the Tomahawk Public Reserve, where Bird Rescue Dunedin plan to relocate the Bills, there are "hundreds and hundreds" of female ducks to choose from, the spokesperson said.

OUSA Queer Support Co-Ordinator Kelli-Anne Te Huki disagreed. She said these attitudes “perpetuate heteronormative expectations on relationships”. “Love is love, even if they are ducks,” she said.

The Dunedin Wildlife Hospital is another wildlife organisation that has interacted with the Bills. They returned one of the Bills to campus after an injury in 2019, because he was "definitely happy living there". They have forwarded the case of the uplifting of the Bills on to the Department of Conservation to “discuss what the next course of action is in this situation, if any”.

According to the Animal Law Association at the University of Otago, the Department of Conservation administers permits that allow organisations to deal with paradise ducks. “The paradise ducks are Crown property, so the Department of Conservation has complete mandate over them,” said Ruby Adams, President of the University’s Animal Law Association. “[N]o other person or organisation may touch or move animals protected under the [Wildlife] Act, unless they have a permit to do so.” Bird Rescue Dunedin has a permit.

Food Truckers who work near Union Lawn have condemned the removal of the ducks. Amit from Tikka Truck said that the ducks are no bother. Catherine (a.k.a the Dumpling Lady) was a lot more vocal with her outrage. When told of the ducks’ relocation she said “I’m sorry, but what the fuck?” and said the ducks are very happy on campus. "I feed them like three times a day." She also said Bill and Bill have been on campus as long as she has been, which is just under two years, but that she had not seen them in over two days.

Not all students are upset about the relocation. “These Bills have been a delight on campus, but they may deserve to live their life out in a new paradise,” said one Facebook commenter and Zoology student. She noted that “these boys are very much loved, and 100% DESERVE to live in an area where they won't accidentally eat trash/vom around the Uni area.”

At the time of writing, about 285 students had signed a petition calling for OUSA to adopt Bill and Bill. The OUSA Exec scheduled an emergency meeting to consider the request for the morning of Friday 17 July, after Critic goes to print. As far as Critic is aware, OUSA does not have a permit to deal with paradise ducks under the Wildlife Act 1953, so this plan might be impossible to put into action unless DoC is feeling nice.

The petition comments revealed outrage in the student community about the uplift of the Bills by Bird Rescue Dunedin. “These ducks are more visible on campus than the exec :((,” said one student. “Long Live our gay kings,” said another. “How dare they send them to conversion therapy,” asked a student.

“[T]he ducks are the only serotonin i get all day pls save them,” wrote a student on the petition.

But democracy may be too late to save the Bills. OUSA’s Welfare and Equity Representative, Michaela Waite-Harvey, called Bird Rescue Dunedin to inquire about adoption by OUSA on the afternoon of 16 July. Over the phone, a spokesperson for Bird Rescue Dunedin claimed that the organisation had already released the birds into a colony of thousands of paradise ducks at Tomahawk Lagoon. Critic has not had a response from Bird Rescue Dunedin to verify that claim.

At approximately 11pm on Thursday 16 July, video footage obtained by Critic showed OUSA Finance and Strategy Officer Josh Meikle ventured to Tomahawk Public Reserve to search for Bill and Bill. He was unsuccessful.

“We hold out hope that they have flown back [to campus],” Josh Meikle told Critic.