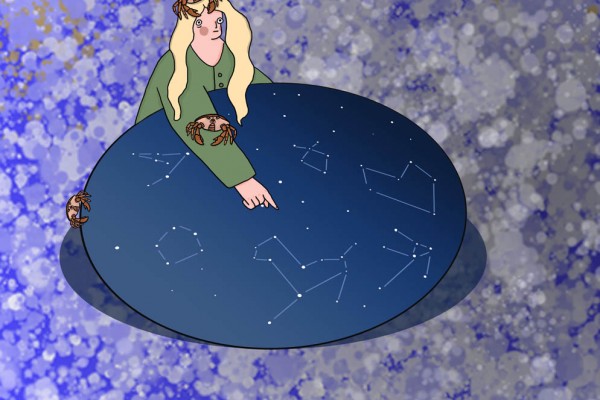 Astrology is like a personality test, but cosmic and mean. In the stars lies a horribly accurate character analysis chart that will expose your flaws and potentially make you reevaluate your past relationships. You haven’t lived until you have your ass handed to you by the fucking planets. As a white girl who has invested way too much time into learning about astrology and checking the Costar app, I feel I have some authority to write this handy guide on the planets and how they’ll fuck your life up.

Most people not of the star-crossed variety know their sun sign (the main sign that aligns with your birth date), check-in every now and then on a Facebook or Critic horoscope, but that’s pretty much the end of it. That is only the tip of the cosmic iceberg. Your full star chart is a breakdown of the planetary positions in the sky in the location and at the time you were born. Those planets align with the signs and dictate specific aspects of your personality, as detailed by the traits associated with planets and signs. There are also houses, which is a whole nother thing that I will not be going into. Baby steps into insanity, right?

What planets (right now) are making me sad?

Cancer season lasts from 21 June to 22 July. The sun is aligned with the crab and it’s gonna make you sad. Cancer is a water sign and, importantly, the cardinal water sign - the first water sign to appear in the Zodiac year.

Cancer’s ruling planet is the moon, so it makes sense that this is a very emotional sign, and is considered the matriarch or maternal figure of the 12 signs.

Emotional security, internal state, relationship with self and others are all dominating during Cancer season. Now may be a good time to rewatch Midsommar and ask yourself, “do you feel held by him?”

It’s time to cry. Feel the things you’ve been avoiding (ties in well with the retrograde), let your inner water sign come out and just embrace the emotion. The fluid nature of water (and it’s associated signs) mean mood swings will also be common during this season, so keep that in mind when you’re feeling a little low.

Our dear friend Mercury, the planet of communication, ideas, speech, day-to-day relationships, and transportation. All essential parts of our everyday life, and currently in a tailspin. Named for the god Mercury (Hermes), messenger god because it has the shortest year of all the planets, orbiting the Earth in 88 days.

When Mercury is in retrograde, issues with communication, being on time, missent emails and texts, and general information tomfoolery are common. If there was a time for every logistical part of your life to break down, the sky says it’s now.

Some tips to survive the next month:

What the fuck is a Retrograde?

The Mechanics Behind It

When astronomers (the actual scientists) talk about retrograde, they’re talking about the optical illusion that makes the planets appear to be spinning backwards, also known as a ‘backspin’. Planets cannot actually do that, but it looks like they do. When astrologers talk about retrograde it has a completely different take on the astrological phenomenon. Astrologers interpret this backspin to mean whatever traits and interactions are influenced by that planet (like emotions or communication) will be in conflict.

The most common one you’ve heard is Mercury. If you suddenly find yourself taking a wrong turn where you never usually do, or you’re having some serious communication issues, chances are, ol’ Mercury is (appearing to) spin the wrong way.

Although Mercury is the most infamous, all planets go into retrograde and it’s rare that a celestial body isn’t in retrograde. Alongside the general complication brought by the change, it often resurfaces past issues that may have been settled before. That being said, retrogrades aren’t actually the disaster zones we can make them out to be.

The Benefits of a Retrograde

Although retrogrades can fuck your life about, there is a purpose to it, and it can be a productive amount of fuckery. When things get confusing, as dictated by the planets, it provides an opportunity to slow down, do some self-reflecting and focus your energy on what’s being affected.

For example, when Venus is in retrograde, relationships and love life are going to take a hit. Dynamics may shift and old shit may be brought up that you’d prefer to bury. Instead of rejecting the discomfort and trying to hide from the negative feelings, take it onboard.

Talking through things with your friends, taking some extra time to take care of yourself and re-evaluate your relationships with others and yourself can be great ways to take advantage of uncertainty. Although wallowing and cursing your phone for every bad text you’ve ever sent can be cathartic, it’s unproductive. Retrograde is an excuse to slow down and reset.

I’ve taken to considering retrograde as a difficult therapy session. It sucks, and you’ll probably cry, but if you’re willing to do the work and slog through the discomfort, you can come out of it with an improved outlook on your life.

When a planet is going into and coming out of a retrograde, that planet is in the ‘shadow’ of a retrograde. It lasts for as long as the planet stays in the right position, which varies between planets, but for Mercury, it’s about two weeks.

These are the easing periods of retrograde. The planetary influences will start and the beginning of the shadow and ease out at the end. It gives you a chance to settle into the retrograde period, and then have a steady return to real life.