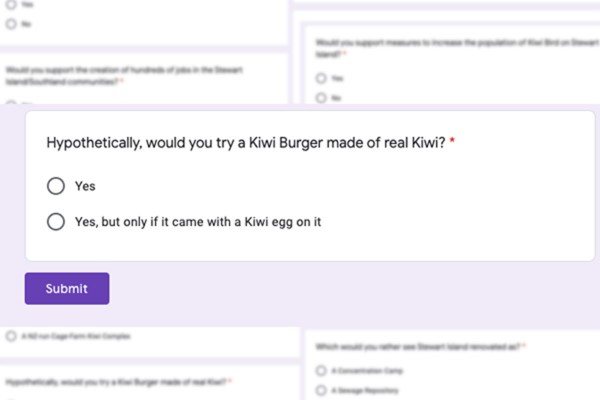 Data doesn’t lie. More Otago students support factory-farming Kiwis on Stewart Island than legalising cannabis. These young patriots have a keen eye on creating a booming economy in the Southland/Rakiura area, with 100% responding that they’d support increasing jobs in the area. 100% also support increasing the population of Kiwi, and what better way to accomplish both of these goals than by farming them?

62% of polled students said that they’d try a Kiwi burger made of real Kiwi, with one student remarking, “dude, a buttermilk deep fried kiwi breast on a burger sounds so fucking good”. I couldn’t agree more; if they didn’t taste so good, why would they be endangered? I say let all of Aotearoa get a taste of their national pride. Imagine your 2am Maccas run now ends in a delicious, 100% NZ-grown, Kiwi patty, served atop a massive, steaming Kiwi egg.

By transforming the Rakiura National Park area into a cage-farm complex, the Southland community will create hundreds of jobs and galvanize a new economy at the expense of a few species of native trees and birds - sounds like a good deal to me. Who needs trees?

Speaking conservatively, by transforming just half of the island’s area into a farming complex, we could house 1 million Kiwi with one square meter of cage apiece. Since they can’t fly, we could realistically fit far more than this into the same area by using the same tried-and-true farming techniques as we do for chickens. Their comically long beaks take up as much space as their bodies and, if we’re tube-feeding them anyway, those could just be amputated at birth.

By stacking cages into towers, we could double or triple the amount of Kiwi on the island, and thus double or triple the revenue. Suddenly, instead of spending 11 million dollars to support a flightless evolutionary oddball, Aotearoa would be reeling in the cash on the backs of our national symbol.

Obviously this is a terrible idea. Students don’t actually want to factory farm one of the last wild places on the planet. The point of this exercise is to ruffle some flightless feathers and demonstrate how even the most absurd ideas can seem to be supported if the survey is designed maliciously, and as we head into election season, it’s important to remember that polls can be intentionally deceptive. Critic and every other media outlet will be polling during election season, so remember to think critically about any data you see - statistics are not always what they seem.

Data DOES lie. Statistics, like tequila shots, are best taken with a pinch of salt. Behind every survey is a surveyor, and those surveyors bring their own biases and agendas to the table when designing a poll. To generate our outrageous Kiwiburger data, Critic consulted Dr. Fabien Medveckey of the Science Communications Department. Fabien spends his time teaching students how to responsibly communicate accurate data, so he was thrilled to finally use his powers for evil.

To start, we took a page out of a master’s playbook. Here’s a real-life example from the website of an infamously honest US presidential candidate:

B. A Radical Socialist Democrat

We took a forced multiple choice strategy. For example, 63% of students said “YES”  they’d try a Kiwi burger made of real Kiwi, but that’s because the only other option on that question was “YES - but only if it came with a real Kiwi egg on top”. This approach was far from subtle, but the point remains the same: it’s fairly easy to design a leading question to generate fixed data.

Similarly, it’s true that 90.9% of students said they’d choose to turn Stewart Island into a Kiwi cage-farm, but that’s because the only other two options on that poll were “Concentration Camp” and “Sewage Repository” (nobody chose concentration camp).

“Imagine polling about favourite ice cream flavours,” explains Fabien, “if you design a drop-down menu of choices, you’ve already limited the selection to the ice cream flavours you could think of. And if you leave it as free-response, people get all ‘stunned mullet’ and can’t think of any options besides the usual ‘chocolate, vanilla, strawberry’. So, either way, a survey is a bad method of finding out what really matters.”

Here are some things to look out for:

As we enter election season, Critic wants to poll students about the issues you care about, and we want to report honestly what your thoughts are. Help us out: send us the topics you care about, send us the topics you’re curious to see polled. Surveys are inherently flawed, but if we can all keep that in mind, the data they produce can still be a useful snapshot of a diverse population. Happy polling.