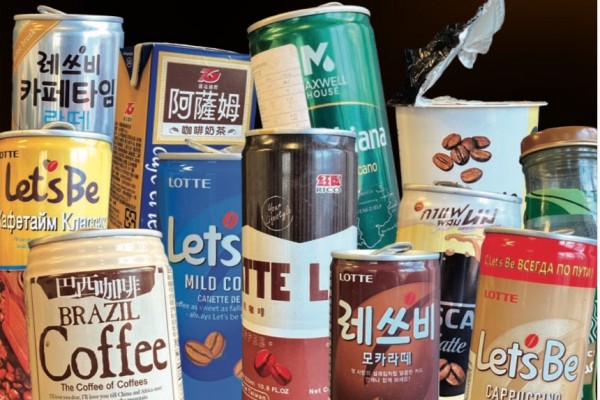 Most people have never tried an RTD coffee (ready to drink. No, it doesn’t mean it is alcoholic), but you should. They are revolutionary. If I’d known they were a thing in first year, it might not have taken me five years to finish my degree. UniMart is full of them, and most of them are around the $1.30-$1.50 range, which is an absolute steal. Also they have a long ass shelf life, meaning you can buy in bulk and throw a couple in your bag before uni to save yourself precious studying and/or talking to your friends in Central Library time.

To optimise your new RTD coffee life, this review will measure the price (and price per 100ml), caffeine content (and caffeine per $1), sugar content, how creamy they are, and whether or not it will give you the energy you need to smash out a 3,000 word essay.

Personally, I think the caffeine content is the best guide to determine whether or not it's worth your time, followed by taste. For reference, the Food Standards authority for NZ and Australia say that the average instant coffee or energy drink has 32mg per 100ml. One 250ml can of Redbull has 80mg of caffeine.

This was by far the most expensive drink. The price, plus the brand power behind the name, set my expectations high. It did not meet expectations. It definitely wasn’t bad, but for what it cost it was incredibly average. It didn’t taste like coffee. If anything, it tasted a little like smooth caramel, and was sweet without being sickly sweet - a feat, considering it had more sugar than any other RTD reviewed on this list. The glass jar was fancy, but Kmart fancy. I felt like a Karen. Did it make me feel motivated to do work? No. But it did make me feel ready to have a really good chat with a stranger in Central Library.

Damn, this one is a HIT, and maybe not in a good way. Drinking this made me feel like I’d woken up late for a lecture and was in a rush. It made me feel unstoppable, but also not in a good way - in like a jittery and anxious way. The taste itself was ok. It reminded me of Irish whisky, but did not make up for the fact that it smelt weird as hell, like a carpeted bathroom in your grandma’s house. This also came in something I can only describe as a noodle cup. The peel-off lid was glued so well that I had to use a pen to stab a hole through the top, just to get a grip.

I got my hopes up for this one when I popped the seal and gave it a whiff. It definitely smelt like coffee grounds, but absolutely did not taste like coffee. It was a milk tea (which, to be fair, is in the name) with a coffee-like aftertaste. It also manages to be creamy but a synthetic kind of creamy. At first I thought there was a nutty muesli bar-like aftertaste, but when someone else pointed out that it had a slight chlorine twang, I couldn’t taste anything else. It threw me back to wanting an ice cream from the Moana Pool lobby vending machine, but not enough to ask my parents because they’d definitely say no.

This doesn’t make me want to get shit done, but it did make me want to take a huge coffee poop and check some emails. It tasted like a true clash of titans - bitterness versus sweet. Pretty amazing considering it had one of the least amounts of sugar out of all the RTDs. I’d like to think the bitterness meant that there was lots of caffeine in it or something, but this was one of the few RTDs that just straight up kept their caffeine content a secret.

Is this coffee or just a malt drink? Either way, I was really into it. It smelt like mocha and tasted like an Up and Go, or a Milo with three heaped teaspoons. It made me want to dunk some ice in and sit in the sun. One Critic writer said it reminded them of hanging out with their friends in Port Chalmers. I have no idea what that means.

This was just watered down Up and Go, and almost as soon as it was transferred into a cup it developed a weird film. I don’t know what that indicates, but I didn’t like it. Weirdly enough it actually put me in the mood to study because of how fucking depressing it was.

Turns out that CafeTime classic and latte are just the same coffee, but the cans are different. If the Korean translation wasn’t enough to prove it, though, the taste certainly did. These are easily the most coffee-tasting RTD coffee I have tried so far. While drinking them, I heard the Nutri-Grain scream in my head. I want to run a Sanitarium iron man. I want to poop.

MOOOOOOO damn this is super creamy. This is a good time to mention that I’m lowkey lactose intolerant, but I’d do anything for Otago students. I love you. I don’t love how sour it tastes, though. It doesn’t seem like a curdled cream situation, rather there are too many flavours trying to happen at once and I’m tasting the bloodshed of their battle. That, and it also tastes like what I imagine the Kings Cup would taste like if you played Kings Cup with day-old coffee.

I think black coffee is yucky, so I asked the OUSA Finance and Strategy Officer and coffee connoisseur Josh Meikle to do this one for me. He didn’t immediately wince, which was a plus. He said that it was sweet without being sickly sweet, but that it was a bit watery for his liking. A good introduction to black coffee for anyone who wants the aesthetic, without committing to the punishment that is black coffee. Josh said it didn’t make him feel motivated to do work, but it did make him want to go and get a hot coffee.

Caffeine per serving: Doesn’t actually say how much caffeine is in this, and “instant coffee” is low on the ingredients list for, you know, a coffee. It’s never a good sign when there is added “coffee flavour” either.

Because it doesn’t say how much caffeine is in this drink, I am hesitant to rave about it. But it’s a fucking good drink. Pretty much the only thought I had while drinking this is “YUM”. It’s the same brand as the Let’s Be: CafeTime classic and latte, but has a third less sugar, which basically makes this a protein shake-level health drink.

Caffeine per serving: Also a mystery. Instead of “instant coffee”, this Lotte coffee has ”powdered coffee”, which I assume is the same thing, but weird that the same brand would use different ingredients.

This didn’t taste much different from the Let’s Be: Cappuccino drink, but the coffee flavour was definitely weaker. Why does this brand make so many different but similar coffees?? I furiously googled them to find out more, and it turns out that this brand is huge in the RTD coffee market. Lotte (full name Lotte Chilsung) got a contract with Pepsi in the ‘70s, was the “official beverage partner” at the 1988 Olympic Games, and in the 2010s took over a liquor company and began producing alcoholic RTDs, too. A year later they staged a takeover of Pepsi Cola Products Philippines, Inc. For six years in a row their soju, ‘Chum-Churum’, ranked number one in Korea’s National Consumer Satisfaction Index, and may be one of the most recognisable sojus in New Zealand, too. In just the past decade they’ve won awards from Korea’s Ministry of Gender Equality and Family, and Ministry of Employment and Labour. None of these facts answers why so many of their coffees taste the same, nor why they don’t list the caffeine content on the can.

12. Brazil Coffee “the Coffee of Coffees”

The “Coffee of Coffees” is a high benchmark to give an RTD coffee. You could taste the imposter syndrome in every sip. It definitely isn’t the worst RTD coffee that UniMart had to offer, but was it the best? No. It wasn’t so average that I was bored, just disappointed. It wins points for having a poem on the front, though, which includes the line “I’ll love you dear [... until] the salmon sings in the street”.

While I respect Nescafé Latte for being both creamy and having the least amount of sugar, the fact that it doesn’t say how much caffeine there is makes me hesitant to give it the number one spot. I wouldn’t dream of being so irresponsible with my recommendations that I advocate for a coffee that tastes lowkey bad without giving you a solid buzz. So, the ranking is as follows:

12: Starbucks Frappuccino - Not worth your money.

11: Assam Coffee Milk Tea - Tastes like a milk tea not a coffee, but to be fair it says that in the name.

7: Brazil Coffee “the Coffee of Coffees” - You can taste the imposter syndrome.

5: Lotte Let’s Be: Cappuccino - Boring, but solid taste if the taste is all you care about.

1: Lotte Let’s Be: CafeTime Classic/Latte - The most coffee out of the coffees. An overall good time.