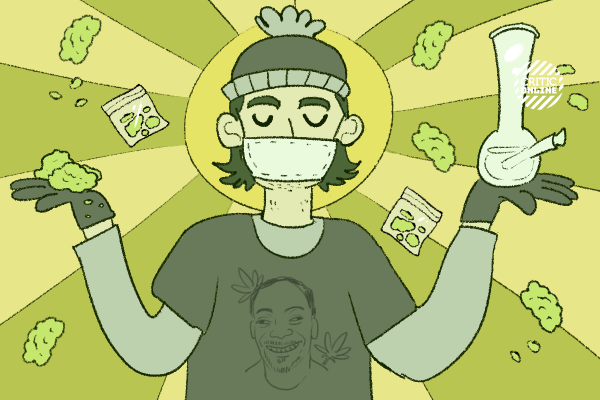 If there is ever a time for weed to be legal, it is during a pandemic. Personally, my anxiety has been at an all time high, though I am slowly learning to be kinder to myself for not being as productive as usual. Sometimes, the only way I can sleep is with a cheeky bit of the dev’s lett’.

Before lockdown, I would watch my dealer, Mr Green*, neatly tuck a fifty into a plastic bag before handing it over, his hands gloveless. The day lockdown was announced, I hit him up, like countless other customers, keen to stock up before it was illegal to leave my house, let alone buy weed. He sent us all a newsletter-like message, detailing how he was managing sanitation, implementing a new delivery system, and dealing with an influx of new customers.

Mr Green wasn’t the only dealer taking these precautions for the safety of themselves and their customers, though. Critic managed to get in touch with five different weed dealers about how Covid-19 has affected their business.

For starters, there is the question of accessibility: how are you going to buy weed when you aren’t allowed to leave your house? Once lockdown was announced, Mr Green messaged his customers to offer a delivery service for $5 a pop, or free if you bought more than $100. Professor Baggie* did the same, and for the same price. “I used to only charge $5 for people who were buying late at night,” the Prof said, “but now that there is more risk and time involved in keeping everything clean and shit, and more people want it delivered, had to change [my business model].” Professor Baggie is Snapchat based and, like Mr Green, communicated how he was keeping his baggies clean to his customers. One Snapchat he posted had a picture of rubbing alcohol next to a jar of nuggets with the caption “cleanest and skunkiest nugs out”. I asked him if he thought that $5 was low for the risk he was taking. “Gotta do what you gotta do,” he said.

Comrade Leaf*, on the other hand, has not offered home deliveries, but business is still open. People could go to his house, but had to pick up through the window. Dankman* wouldn’t even go that far - letterbox pickup only, he said, completely contactless. Buddy* has had to give up dealing all together. Her health “isn’t stable at the best of times” she said, and couldn’t risk catching the virus from a customer.

Buddy is gutted. Not just because she is losing business at a time when the weed market is in high demand, but because “now more than ever people need their weed”. Comrade Leaf agrees. He said “in a crisis people need [euphemism for weed so the GCSB don’t catch on] to distract them from the stresses of the world. This shit’s vital.”

The customers seem to agree. Once lockdown was announced, most dealers noticed an influx of requests, all except Dankman* who said although customers would talk to him about Covid-19 when they bought, they weren’t buying any more than usual. Mr Green said his sales have doubled, even “on days that were usually quiet”. He hasn’t run out of stock yet but said there is a possibility he may in future. Comrade Leaf said the demand has “died away” but certainly he experienced “the expected rush” after lockdown was announced. “I don’t think people are smoking much more than normal,” said Professor Baggie, “just that they can’t guarantee they can buy [weed] in a couple weeks ... I can’t guarantee that it won’t be too risky for me to sell in a couple weeks.”

Supply and demand aside, during a pandemic, hygiene practices are more important than ever. Professor Baggie and Comrade Leaf described treating any cash “like they are nuclear” or “explosive” - nothing gets touched without a lot of hand washing or sanitizing. Mr Green makes sure when his bags are made up, everything is done with gloves.

I was surprised that almost all of them were so committed to continue dealing. With very few people out on the streets, getting caught is even more likely than ever. “It’s definitely worth the risk,” Professor Baggie said. Mr Green said “the amount of people who are grateful and happy [with] my service is amazing. I do this everyday.”

Buddy admitted that despite the risks to her own health, she still supplies to “a couple” of clients who have been buying off of her for years, because “it’s like their meds, I can’t cut them off”. She said, “it’s fucking stupid that this isn’t legal yet” and that “it sucks” to be the only supplier “to people who need it to eat, sleep, and even get up in the morning sometimes … this is legit essential”.