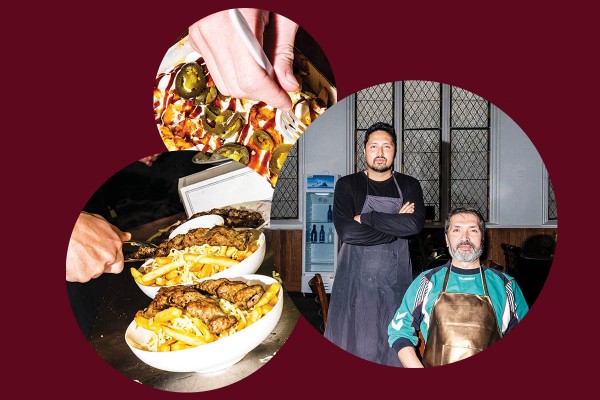 Operating a family business can be tough. Long days, commitment to work, and family time 24/7. Yet somehow, a few full-time students and their father run a kebab shop specialising in Afghan food in a place that is very different from Afghanistan: North Dunedin.

I decided to sit down and talk to two of the students that run the shop as well as study at uni.

The Kebab House originated out of every student’s favourite pastime - procrastination. Hamid, a current student studying Anatomy, put the books down and scrolled on the net looking at flats. He kept going back to a listing of a church and laughed, thinking “who would have a food shop in a church?” Apparently, they would. Having an uncle in Christchurch with a very popular Afghan restaurant “it just made sense, our family is known for Afghan food”, so their father leased it and the whole fam was in.

The Kebab House is different than any other Middle Eastern food around these parts, and is the most southern Afghan food place in New Zealand. They serve meals such as the traditional kebabs on rice, HSP (halal snack pack/hangover snack pack) like meat on chips, and souvos (wraps). There is no other way to describe how other places just don’t do it like the Kebab House - all I can say is that it’s so good they can take my course related cost money any day.

But how do they do it? The shop is open for dinner Tuesday to Sunday and they still have to make time to study their Med and Science degrees - not to mention they barely spend any time at their own house.

Hamid said “I call people between classes, talk to stakeholders, chase up the suppliers”. Any break he has, he is the business guy.

His sister Ma, who is in her first year of Med, said that it was hard throughout First Year Health Sci because they were open from 12 to 9pm every day, until they readjusted their system. Now if the shop isn’t busy, they’ll crack open a book between work breaks and fit in some study time.

The shop began with humble beginnings. It had some wear and tear, and was given a bit of love. It transformed to the homely place it is now, revamped with new paint and dining tables, solely by the hard work of a typical brown dad with his rickety ladder and DIY. Hamid said his family “just wanted it to feel like we have invited you to our home, because that’s the best way to have Afghan food”.

Sometimes the pressure of running a family business can be too much for a student, but they knew what they signed up for. Hamid reckons “it’s our responsibility, we decided to do this as a family”, to which Ma agreed. They see the benefits of running a small local business because the connections they make with people are so rewarding; sometimes they have “lab dems and lecturers come in”, most likely to order them an HSP with extra chilli sauce for a lil spice. The work also gives them a well needed study break, letting them switch off and not stress about other things.

In 2019, three weeks after opening, the Kebab House sign their father made was stolen by a mystery person. They didn’t seem to mind too much, their dad told them to “not worry about it”, and Hamid and Ma said they “hoped at least whoever stole the sign named their flat the Kebab House,” because that would be amazing. They never found the sign again.

But I, for one, am outraged, and have formally opened an investigation. I will find you. You’ll regret this. Because again, I would die for the Kebab House.

The Kebab House is based in a former church on Dundas St and has answered Dunedin’s prayers. I have reached out to a God for comment and they said “yummy very good 5/5 gorgeous family”.