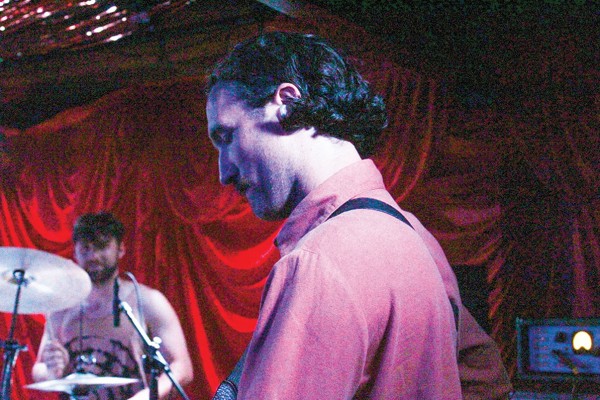 Gig Review: How Deep is Your Love?

On Valentine’s Day, an army of Doc Martens’ shook the flimsy 19th-century floor of the Cook; by 9pm, the How Deep is Your Love gig was well underway.

The vibes were strong the whole time: each band commanded total control of the crowd. The breaks between acts left the audience disappointed and redundant, restless for the next act to begin, while they chain smoked to pass the time.

Mary Berry, on their home turf, opened the night, followed by the siren songs of Mermaidens, with Sea Mouse bringing the evening to an energetic conclusion.

Critic profiled Mary Berry not too long ago - loyal fans will remember how their sound goes: the perfect mix of head-banging heavy and groovy toons. The pre-set energy in the room may have been mellow, but once Mary Berry took the stage, the crowd was braced for the emotional and melodic journey ahead. The shared glances between the band members and audience made the whole room feel like they were in on some private joke. Dancing on the floor surrounded by strangers felt like a hug followed by a fistfight. They finished their set with Deranged, a crowd favourite, and left the crowd riled up for the set to follow.

Mermaidens took the stage dressed head-to-toe in red for the occasion. Floating above the expected and accepted, we were enticed by the wandering riffs and ethereal vocals that place the band on the map. Through the shifting red and blue lights and a drunken haze, the image of saints visiting the martyred doesn't seem far off. If you didn’t have an out of body experience at some point during the set, you weren’t listening. The meandering beat fell perfectly in time to the tune of a Valentine’s Day heart, somewhere between apoplexy and infatuation. Loving melodies met neatly with dark, bass-heavy ballads of pain and heartbreak, the perfect equation for a dance followed by enough emotional volatility to collapse a small dam. The classic Dunedin sway was in full swing as the intoxicating riffs drifted over the crowd and into the night. Booze and bass lines flowed easily among attendees, unblemished but impacted by an invisible force of some hypnotic substance infused in the music.

Sea Mouse brought the night to a close, not with a lullaby, but a knock-out punch to the face. The ethereal energy provided by Mermaidens was brought kicking and screaming down to earth with the signature upbeat energy the band effortlessly supplies. Stomping tunes shook the dizzy-headed slowness of a late, long night of music and booze. Even the lights seemed harsher and more awake as they flowed alongside the set. After the emotional rollercoaster of the previous bands, some pure rock and roll to throw yourself around to was pure catharsis.

Valentine’s Day can suck for a number of reasons, but this gig made it nearly impossible to wallow in self-loathing. The individuality of the bands made for an engaging and provocative show, but the energy and tone created a unique, yet cohesive set, roping the crowd in and stringing them along until the final song. Like a toxic ex, I have no doubt the blush glow of the lights and unforgettable show will stay with you for a lot longer than you thought it would.