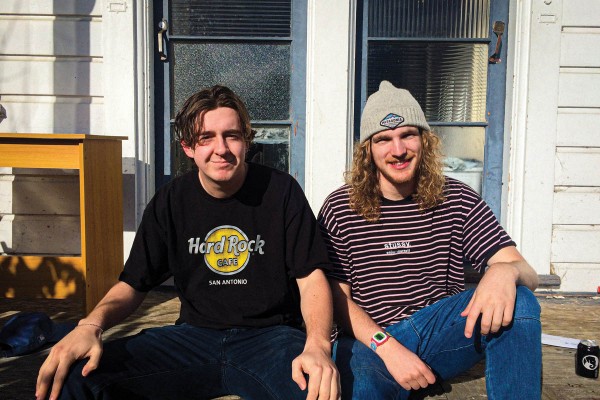 “Vaccinate your kids, be aware of hidden water, global warming is not a myth, and fuck Donald Trump.” These are the mottos of local students Ben Paanakker and Flynn Robson. Ben and Flynn seem like the average breatha. Living on Queen, loving a cheeky Wednesday night appearance at Pint Night, and talking mad shit with the boys. But both these boys share a mutual love for science. They both describe many a night spent yarning about climate change and the existence of aliens. One fateful night, they both thought “why not record this?” and thus, Breatha Science was born. Breatha Science is a weekly podcast in which Ben and Flynn talk about various pressing issues in our society through science. As Ben studies Marine Science and Biology and Flynn studies Chemistry and Economics, each of the boys brings their own unique skill set and perspective.

The first episode of Breatha Science was released on Spotify on 23 July, focusing on climate change, Trump and aliens. They’ve released six episodes since then, discussing a wide range of topics with the help of special guests. Each episode is around forty-five minutes to an hour long, and involves the boys crackin’ a cold one and talking about some really serious shit. “Flynn and I always seemed to have these long-formed conversations at certain points - usually when we were pissed as - that would last about seven hours. Since we’d be pissed we would start thinking about how these are such important issues and that everyone should be talking about them,” said Ben. “It’s an excuse for us to learn some stuff and share with each other and then share it with others”. As Flynn described, “it’s not just one person talking at you. Ben will research something that I haven’t looked at so I will ask lots of questions that I’m interested in, having a natural, organic conversation”.

Flynn wants the podcast to be accessible to people who aren’t from a science background. “These are topics that aren’t just important to people who study science, because Ben and I are on the fringe of people who study science, so it’s targeted more towards our friends who don’t really know about the technical side of science but love listening to discussions of issues and want to have an opinion on it. It’s getting people thinking about stuff that is important and informing people too.” For Ben, it’s all about getting people to break out of their echo chambers and think about what the big issues young people face are.

Both of them said that making something for the breathas is a crucial part of their podcast. “Breathas are the stereotype of the sort of people you wouldn’t expect to be talking about science. But it’s also a group of people who love these sorts of discussions as well. It’s an accessible way of talking about important issues; like this is how we would talk to the boys we flatted on Castle Street with. We want everyone to be able to understand what we’re talking about and get involved and thinking.” The semi-casual tone of the podcast makes it more engaging, since it flows like a natural conversation rather than an 8am lecture you don’t want to be at.

Although the podcast initially started as a fun form of procrastination, the boys have found a new love for recording in a bedroom on a Tuesday evening. “After the first episode, my topic was pretty boring since I was discussing ‘what is climate change’,” said Flynn. “Ben’s was more interesting and was talking about aliens. After that people started suggesting topics for us to talk about, so the diet episode and vaccine episode were suggested to us. Getting people involved in taking suggestions and having guests on the show makes it more fun and engaging.”

“The response has been pretty good from all walks of life as well, it means that we’re getting everyone to listen which is nice,” Ben said. “It’s nice getting friends of friends listening in; they dm’d us saying that it’s sick. At Pint Night or something we have people coming up saying “we’ve been listening to your podcast” and things like that. We get recognised on nights out when everyone’s pissed and wants to talk to you.”

Both Ben and Flynn are sticking around in Dunedin next year, meaning Breatha Science will be around for the foreseeable future. You can stream their podcast on Spotify and Apple Music, as well as follow them on Facebook and Instagram under @breatha_science.