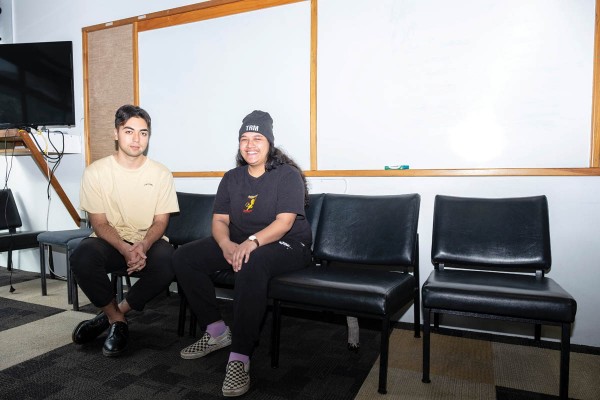 “If you live in New Zealand, you’re going to go to places with names in te reo and you need to be able to pronounce them”

For Te Hau and Karamea, every week is Te Wiki o te Reo Māori. As far as any officially themed week goes, though, Māori language week is this week, and you’ll see a bunch of institutions making an effort to include te reo in their social media posts and the likes.

But on top of living te reo, these Students to Watch teach it to others, too. Te Hau tutors 100-level papers, meaning that his students are often shy and “scared” to give things a go until they’ve had more practice. This is big contrast to Karamea, who couldn’t really relate at 200-level. While there are always quiet students, most of them are friends, and Te Hau’s envy was palpable when Karamea said her students automatically know what to do each tutorial. “I tell them, don’t make me tell you what to do, just do it,” she said. Te Hau is super proud of his work, though. He’s been tutoring for three years now, and finds it’s “a great way to express my knowledge” while learning more himself.

In terms of a work-life-study balance, both of them find their tutoring gigs pretty convenient, though the assignment-marking crunch can get crazy. Karamea said it’s easy to get used to if you’re studying at the same time. “It’s like doing another assignment,” she said. Te Hau is relieved that tutoring isn’t like hospitality, though, where they had to work 10 straight hour shifts – though he also teaches 60 students some semesters, so who’s really winning?

They agreed that the biggest misconception when it comes to teaching te reo is that students assume that they know everything. This is especially true when you learnt your te reo growing up from whānau and hapū and not ‘by the book’. Karamea said, “a lot of my kids spoke te reo at home and come straight into 200-level,” and that it can be a struggle to keep up with the books. Te Hau said that sometimes when people ask him why things are said a certain way “just because”. He suggested for others to think about their own native language, and said, “can you explain what a passive sentence is?”

Neither Te Hau nor Karamea were sold on the idea of mandatory te reo in schools, but mostly because of the lack of resources. Plus, Karamea doesn’t think everyone needs to know the full 300-level course of te reo. “Pronunciation is important, though,” she said, “if you live in New Zealand, you’re going to go to places with names in te reo and you need to be able to pronounce them properly.”

It did make them think about how much of a turnaround te reo has had in New Zealand. “Our grandparents’ generation were forced to give up the language. So can you force people to take it on?” pondered Te Hau. Karamea added, “you can literally see it in my family tree. [Te reo] literally skipped a generation.” Te Hau said it’s great seeing how many people value te reo in their generation.

Shockingly, these tutors have lives when they are done studying, teaching, and marking assignments. Te Hau flexed hard af saying he goes to the gym in his free time, while Karamea prefers to just chill with her girlfriend and mates.