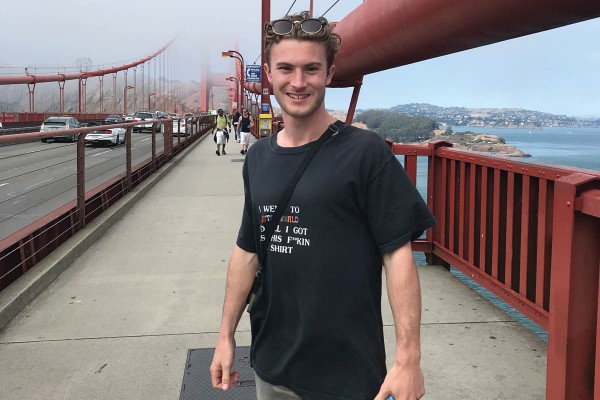 “Even the most confident and socially accepted people have negative thoughts. It’s just part of life. I think that being aware that these things can come and go like the tide is important in maintaining a healthy mind.” James Fletcher is a 22-year-old Law and Commerce student. Originally from Wales, James moved to Wellington when he was eight years old. He began studying Law and Commerce at Otago – but is now finishing his Commerce Degree at the University of California Berkley. James started an Instagram account in July this year called TransparencyWellbeing, an account dedicated to people speaking up and discussing their mental health.

TransparencyWellbeing is an account that promotes a safe and open space for people to express their inner thoughts – as well as interact and connect with others to facilitate a sense of unity and solidarity. “Transparency is an initiative directed at getting individuals to speak up and share their inner thoughts and how societal and personal issues have an impact on this mindset,” said James. ‘Transparency’ comes from the idea that we should become more transparent with ourselves. “We are in a society where freedom of expression is held to be so fundamental, and I think it is important not to hold back your thoughts. Especially those sensitive thoughts that you believe only you should know. I hope that having a more transparent world will help combat mental illness such as anxiety and depression.” The Instagram account works so that individuals can submit their own posts about any facet of mental wellbeing. This can either be done publicly with the submitter’s account attributed to the post or can be submitted anonymously through a Google Form.

The inspiration behind this account comes partly from James’ personal experiences, but mainly from seeing his friends’ struggles and wanting to create a space to help them. “I created Transparency for myself and others, but ultimately it is made effective by others through the expression of their experiences. I hope that more individuals feel comfortable contributing to the page and gain a benefit from doing so,” he said. “I felt as if too many people, including myself, were bottling up their thoughts and emotions and needed a place to download these. I also realised that there wasn’t really anywhere where people could interact with other people’s experiences through certain issues and negative mindsets. I didn’t particularly have any major worries of my own but I knew that a few of my friends did. I thought I would create a place where they could get 100% of what they were thinking off their mind, whether they wanted to keep it anonymous or not.”

While the main premise of the account is sharing individual thought, James’ main focus is facilitating a community. By sharing the stories of others, individuals who feel alienated can feel as if they are not alone, even if they do not interact with the posts directly. “I hope that more individuals feel comfortable contributing to the page and benefit from doing so. As of now, TransparencyWellbeing has a small but tightknit following, but it is hoped that as more content is posted more people will connect with it. I hope that people can benefit from downloading their own thoughts or witnessing other people’s experiences. But most of all, I want to challenge the ‘hush hush’ stigma of containing sensitive thoughts and emotions.”

While James is finishing his degree over at Berkley, he is working to expand TransparencyWellbeing. He has some big plans, like expanding it to a website where people can contribute with audio postings, and making it a fully fledged user-based platform. “At the moment I am focussing my time on Transparency and its growth (as well as my studies). I am really interested in wellbeing, especially the psychology aspect of it. So in the future, I am keen to link up with like-minded individuals and hope to create something big in this field.”