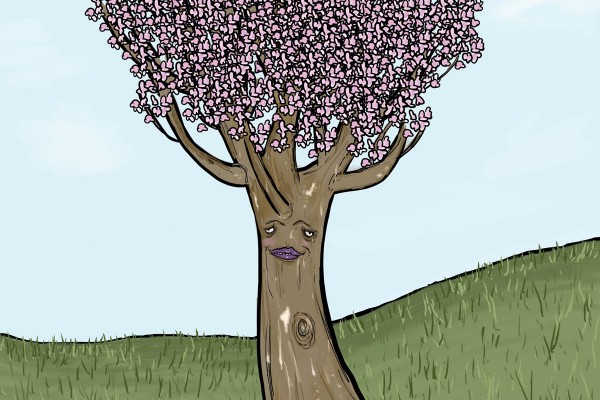 There might be more than one tree, but I’m too lazy to go in search of them, so it’s the one and only, as far as I’m concerned.

Its scent is particularly pungent during Spring when it flowers. Although it is not yet Spring, I decided to hang around the base of the tree to ask passers-by on their thoughts about the tree. I asked questions on the tree’s general appearance, overall ambience and more obviously, its smell. I didn’t get a great response.

I asked a male student what he thought about the tree in general. “Uhhh fine, I guess,” he said. When I asked if they were aware of the tree having any particular smell they said “no” and crossed to the other side of the road. I felt sad. I waited around and asked a tradie on their thoughts on its ambience. They said “what” three times and then walked away. One student I asked said they were well aware of its cum-smelling properties. “It is so gross. I tried to tell everyone and they thought I was crazy, I’m glad you are bringing attention to this disgusting feature in the North East Valley.”

The tree is just starting to shoot, and in a month should be in prime smelling season. Check it out on Gladstone Road. I’m not going to tell you where specifically. That’s for me to know and you to smell out.