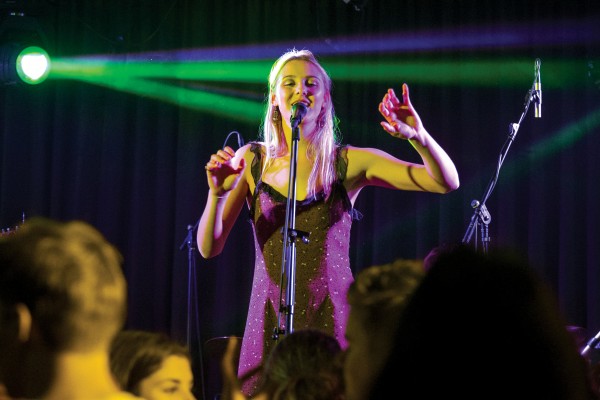 Mia Jay: What It’s Like to Build Your Own EP

“I just want to keep recording and touring until I run out of energy.”

Mia Jay is a singer-songwriter and student. This year, as well as playing gigs around Dunedin and studying a full-time double degree in Music and Commerce, she independently released her first EP. No label or funding or manager; just her songs, her band, and a studio in Port Chalmers. Plus a fuckload of effort. Eye to Eye dropped in March this year.

Recording Eye to Eye was “a big process”. She wrote the songs at the beginning of 2018. Then she found her band members – Joseph Balfe, Jack McRae, and Daniel Hurley – to make the EP and tour with her. “I had to plan everything and it was difficult,” she said. “But I learned a lot.”

Listening to the six tracks that make up Eye to Eye, it seems like it paid off. Mia’s voice is smooth, clear and a good background to chill drinks, or study, or crying in your room (or all three). The EP is relaxing but not boring; the tracks are easy, but there’s a depth to the lyrics and harmonies that offsets the chill vibe. ‘Bleed’ drives forward with a relentless pulse, while meandering tracks like ‘Collide’ feel like floating on your back in a swimming pool. There’s a range of music and it all fits together.

“I like discovering New Zealand artists,” Mia tells me. She’s a fan of singer-songwriters who break a few boundaries, like Aussie singer-songwriter Julia Jacklin or Kiwi songwriter Lawrence Arabia. Closer to home, she’s a fan of Soaked Oats. Her sound is “evolving”, so she’s still figuring out where it fits. “I try to put my genre into a bubble but it’s difficult,” she said. “It’s like, pop-folk-jazz,” she decides.

The jazz is a new part of her music. She gives her band credit for that. “I am not an amazing guitarist, so when I write the songs they’re quite simple,” she said. “[Joseph] made them more complex and gave it this whole other jazzy sound.” Working with other people has changed a lot about her music.

To write a song, she usually begins with a guitar riff and plays on to find the melody and lyrics. “I’m trying to stray from that, though,” she said. She’s challenging herself to write poems and turn them into songs. Sometimes there’s an “overwhelming feeling” that she has to put into music. Those songs tend to be “more raw and real”. But at other times, her process is more structured. She reckons that’s where she writes the songs that “feel a bit more groovy or dancey”.

Playing with a band gives her a different energy on stage, too. “It’s really nice getting off the stage like ‘Fuck we did such a good job!’” When they toured New Zealand, the company was definitely welcome. Mia didn’t expect to enjoy playing with a band. “Because I like writing by myself; I’m an independent songwriter. But when it comes to performing, it’s nice to bounce off other people.”

Touring with the new EP was another learning curve. “We had a lot of fuck-ups.” They went down the country playing gigs in Auckland, Napier, Wellington, and Dunedin. “I just wanted to know what touring felt like.”

The venue in Auckland didn’t have a stage big enough for the four of them. Mia sang down on the ground, in the audience. “I thought it was gonna be a shit night, but it was so good.” The audience were into it and it was “more intimate, more interactive”. The gig in Napier didn’t have a drum kit, so they had to source one at the last minute.

Coming back to reality after the tour means a lot of cover gigs. It’s a constant struggle to balance uni and money and music. “I mostly just people-watch at the cover gigs,” she says. A Dunedin crowd is always interesting. “They either talk over me or get super into it and want to sing along to every single song. Or they fall into me and knock over my mic stand.”

The goal at the moment is to get more gigs for her own music, and then get back into the studio. Mia lives for the moments where she gets to perform her songs. “You don’t get paid so well, but you get to perform your own stuff and there’s an energy, people get into it. I just want to keep recording and touring until I run out of energy, probably.”