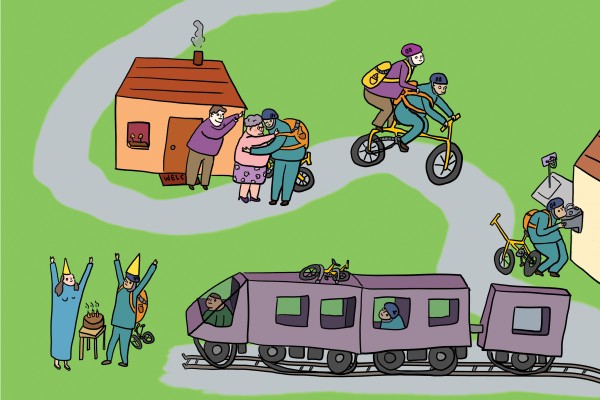 Bike Grylls: The Otago Student Who Biked to Auckland

In the Summer of 2017, Jules Laking left Dunedin with nothing but some basic survival gear and his bicycle. After a year of disappointing grades and dissatisfying living habits, Jules had two things he had to do: he had to disconnect from the sterile state of city living and he had to be back in Auckland in time for his mother’s birthday. He stored all his belongings with a family friend, stole a bunch of oats from the Arana kitchen, and set out with a small backpack and a bike.

Over four weeks Jules made his way up the West Coast and then up the North Island, cycling ten hours almost every day. This daily routine consisted of waking with the sun, being on the road by 8, then cycling until dinner. After dinner Jules would continue to cycle until dusk.

There are three basic essentials that a human being needs to survive: shelter, water, and food.

For shelter, Jules slept almost exclusively in his bivy bag, a hybrid between a tent and a sleeping bag. At one point he slept directly below the ‘Welcome to Wanaka’ sign. This style of ‘stealth camping’ is technically against the law, but the law only exists if you get caught. Jules used public schools as his main source of water.

Jules’s diet had very little variation. For breakfast he would eat basic foods like porridge, or some of his stolen oats stash. Whenever possible, he would hunt down a bakery for a mince and cheese pie. Lunches were filled with petty snack food. Chocolate bars and dates were staples of the diet.

The heartiest meal of the day was dinner, where Jules would cook couscous and tuna every single night. This was not a packing management system or strict nutritional regime. Julian went shopping every second day, but he would only ever buy couscous and tuna for dinners. Why? Because Arana had some leftover couscous and tuna, and it worked pretty well. A little bit of boiling water and you’re basically done. When he felt like it, Julian would zest his meals up with some vegetable stock in the couscous, and some peanut butter on the tuna because “that’s all that satay sauce is anyway”.

After sustenance, Jules had to keep himself entertained. He achieved this by whistling, humming, and singing the Oh Brother Where Art Thou soundtrack. Other than that, the view was all he had to entertain himself. Holes, the novel by Louis Sachar, was a big source of inspiration for Jules’s mental fortitude. Survive the heat and get it done.

Jules popped in to see his grandma in week three, and also got some proper food and a bed. After that, his brother decided to join him, but before long his brother dropped out and Jules was back on his own.

On the last day of the journey Jules burst his tyre just out of Auckland. Having no other option, he travelled the last 50km on train. Jules arrived on the 14th of December, three days before his mother’s birthday. He came back to Otago for summer school with a fresh set of goals and a new major, Māori Health. His journey was tedious, but that was kind of the point. Jules wanted a soft reset of his soul and, through gruelling cycling and a lot of couscous and tuna, he achieved it.