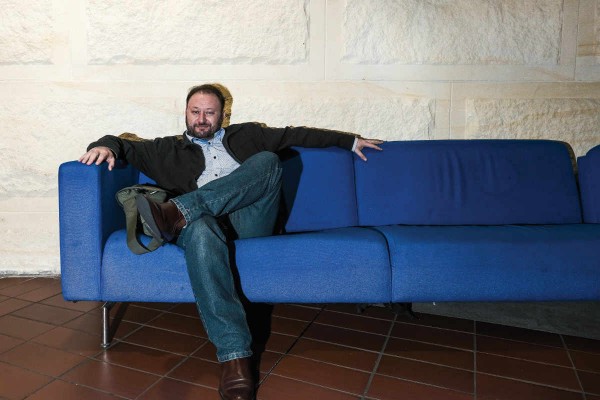 Andrew Rudolph has done a lot in his time. After working in hospitality, banking, radio and human resources, he is now a third year Social Work student here at Otago. Alongside his studies, Andrew is also the secretary of the Dunedin Multi-Ethnic Council, the treasurer of Students Against Sexual Violence, a committee member of the OUSA Welfare Committee and volunteers at a lot more community wide organisations.

Growing up in South Auckland, Andrew began his working career straight out of school as a store-man. He then moved onto the world of banking, followed by working in hospitality for ten years. After being given the opportunity of working as a host for a Drum and Bass show in Queenstown, Andrew moved back to Auckland to pursue radio broadcasting. With a lot of odd jobs on the sides, he felt like he needed a change of pace. “I just decided I needed a complete change and needed to be brave enough to take that leap. I was thinking about it one day and I decided I was going to become a social worker to help others.”

Coming to uni as a mature student is not an easy feat. “There are so many more risks when making this decision later on in life. I put on a brave face and said ‘yeah I’m gonna do this’ knowing that I could come to university, completely fail the first semester, and end up heading home with my tail between my back legs. It was a real risk, but I was so lucky that I had so much support. Coming to uni was a huge learning experience, but I was lucky that I could have people I could rely on and people who showed me the ropes - everyone needs that.”

Through studying Social Work, Andrew has been able to keep up his community engagement. “Community involvement is always something I’ve wanted to do; I’ve always wanted to give back, but I never had the time . . . I’m trying to make up for lost time basically.”. As part of his studies, Andrew works as a supervisor for Time Out Careers in South Dunedin that facilitates court order visitations for children. “They need to have supervisors in the room to ensure the safety of children and that the rules are followed. It’s great to work with kids, and we get to play games. I have a bit of a Connect Four tournament going with some of the kids at the moment. This is the kind of work I find important; because you’re helping families together and they literally could not do this without you there. It’s hard as well at times because of what you see along the lines of tension and strife - but it’s something to be proud of.”

Alongside his course, Andrew has been busy working as the secretary for the Dunedin Multi-Ethnic Council. Along with other community groups the council are currently organising a March Against Racism on May 18th, which is something very important to Andrew. “After March 15th, it feels like we all have a duty now to work together. We have massive challenges within the 21st century, and if we can’t come together we will not survive as a species. I grew up in South Auckland, and I’m very much aware of how things can go wrong in terms of tensions between cultures and ethnic communities. I think Dunedin is doing an amazing job, because the council and other communities especially are really committed to this kind of work. I’m happy to be there and do this kind of work.”

What really stands out about Andrew is his how humble he is. He provides so much for the community, and never asks for anything in return. “I would not want to brag about myself; I would want to brag about others. It’s difficult being a mature student because you feel like you’ll never fit in and literally the students I’ve met here are amazing. They have so much drive and want to change the world, and I’m right behind them. And it’s the fact that they’ve accepted me into the things that I’m doing - that’s the only reason I’m able to do them.”