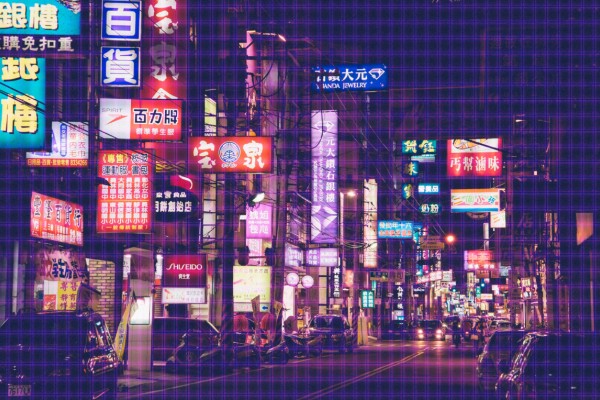 A Critic Mystery by Owen Clarke

Three men in suits sit around a wooden table in the dimly lit room. Lamplight reflects off the velvet curtains and the tattoos spidering up each man’s neck. They grin at each other, whispering evil things and just being bad guys in general. Each are clan leaders in the Yakuza, a name which strikes terror into the hearts of most.

Two guards, bald and hulking, flank the door. You shut it loudly upon entering.

“Who the fu….” The guard doesn’t get to finish his sentence. WHAPOW! You shatter his nose with a cartilage-crushing punch. He goes down. The other draws his gun, but you’re already behind him… WHAPANG! A perfectly targeted blow to the back of the neck sends him crumpling too.

The men around the table jolt to their feet.

You let loose with the Uzi, concealed in the padded crotch of your bell-bottoms. The three men stagger back under a hail of gunfire, falling down. Alarms are sounding, and you can hear the thud of boots pounding up the stairs.

“Time to blow this joint,” you say, slicking back your already-oiled hair. You run towards a window and crash through it.

But it’s okay, because you’re a superspy. You crash through three awnings and two clotheslines, and land unharmed in an alleyway dumpster. Then you hop on your motorcycle and head back to your secret spy headquarters as Yakuza pour out of the building behind you, spraying bullets in your direction.

Upon arriving at the base, you toss your keys to Zeke, the techno/geek-type stereotype who makes all your gadgets.

“Oh no, [Insert Your Name Here],” he moans. “Did you wreck that super-speed bike I gave you again?”

“Nah it’s actually alright. It’s in the garage,” you say, “it’s got a few bullet holes in it though.”

“Awwww,” Zeke whines. “Every. Freaking. Time.” He storms off.

You head into the office, stopping to talk to Agent Lovestorm, the sexy superspy that you sometimes hook-up with.

“Heyyyy [Insert Your Name Here],” they respond in their lilting, honeyed tone. “I heard you were messing around with some Yakuza this afternoon? They didn’t scuff up your pretty little face... did they?”

You head towards the briefing room. Mike, the janitor, is mopping the floor outside.

Mike is kind of annoying, but you get it. Not everyone can be a stud superspy like you. You’re glad that at least you can be a role model for the lesser beings of the world to look up to.

You walk past Mike into the conference room, where the secret agent leader, Boss Man, is standing with another agent, Jack-Knife Jones. He looks worried.

Fuck Jones. They’ve been jealous of you since you started sleeping with Lovestorm.

“Check this out,” Boss Man holds up a phone. A Twitter post is pulled up on the screen.

@YakuzaGangstaBoi69: “Hey [Insert Your Name Here], we totally knew you were coming pal! Fucking idiot. Those three dudes you killed weren’t even our leaders, they were just some low-ranking dudes we were trying to ice anyway hahahaha #yakuza4lyfe #workhardplayhard”

“So what’s this mean, Boss Man?” you ask. “Are you telling me there’s a mole in the agency?”

“Yeah [Insert Your Name Here],” he responds. “It looks like there’s a mole in the agency. There’s also a mole on my left ass cheek,” he adds. “It’s been growing lately. Do you think I should see a doctor?”

You shrug. “Yeah Boss Man, probably. What’s this mole in the agency mean, though?”

Boss Man grimaces, “It means someone here is working with the enemy. That mission you went on was top secret. Nobody, and I mean literally nobody apart from me and you, was supposed to know you went on that mission. The mole obviously isn’t you, because you just went in and shot this place up on fake info, but we can’t trust anyone else”.

“Oh come on, Boss Man!” mutters Jack-Knife. “Me? You can’t trust me? I’ve been fucking working here longer than this joker.”

Ten minutes later, everyone is in the conference room: Zeke the geek, Agent Lovestorm, Mike the Janitor, Boss Man, Jack-Knife Jones, and you.

“Take point, [Insert Your Name Here],” says Boss Man. “You’re the only one I can trust here.”

You puff out your chest. It’s typical that you’ve got to do all the work.

“Someone here isn’t who they say they are,” you respond. “One of you bastards is working with the Yazuka. Zeke! What’s your alibi?”

Zeke is already sweating. Hmmm. “Well...I uhhh…. I’m just the tech guy, you know? I don’t do any of that fighting stuff. I’d be too scared to work with bad guys, you know? I’m a good guy, you know?”

“Yeah, but you were mad I got some bullet holes in that motorcycle, weren’t you?”

“Yeah but you do that stuff every time [Insert Your Name Here]. It’s cool. It’s part of the job,” Zeke responds, scratching his neck. “I don’t even speak Japanese. Also, that bullet hole thing was after the mission!”

You turn to your lover. “Lovestorm, what about you?”

“Me? I would never betray you [Insert Your Name Here]. You’re my baby.” They wink.

“Well, in that case…. I was here in headquarters, doing some squats,” they say.

You turn to your counterpart, Jack-Knife Jones. “Jack-Knife?”

“Answer the question, Jack-Knife. What do you have to say for yourself?”

“I fuckin hate Yakuza,” Jones says. “I’d never work for those clowns. Remember, they cut my left [REDACTED] off back in ‘08?”

Mike the Janitor is looking down at the floor.

“Mike?” you ask. “I know you’re just a lame-ass janitor, but what’s your story? We can’t exclude anyone. Even someone as boring as you could be the mole.”

Fuck, this guy is annoying.

You pace the floor. Boss Man looks at you expectantly.

“Sike!” you yell, “SIKKKKEEEEEE! I already knew who the mole was from the beginning. I’m [Insert Your Name] motherfucking [Here], remember?”