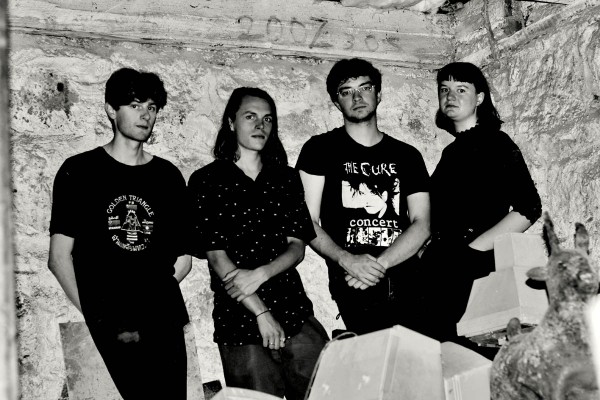 Have you ever wondered what it would sound like if Kate Bush covered Modest Mouse in a semi-ironic emo way? That is how the Dunedin band Milpool best describes their sound. Comprised of Adelaide Dunn on vocals, Tom Monaghan on guitar, Josh Howley on bass and Hamish Morgan on drums, Milpool has been creating moves in the Dunedin music scene following the release of their EP ‘Down’ in late January.

Tom, Josh and Hamish came together by coincidence. As Tom explains it, “Milpool formed drunkenly, as literally all of the bands I’ve been in have”. From there, the three-piece released singles like “Yr Side,” “Chads,” and “Sea Foam”. They competed in OUSA’s Battle of the Bands in 2017, and came in second place. However, they all believe their style and composition has changed since Adelaide joined the band in late 2018. “We’ve gotten more competent with writing songs since Battle of the Bands. I was listening to our earlier stuff and it’s very disjointed. It’s a lot more natural and organic now; you can tell we’re all more comfortable with each other.”

Milpool as a four-piece released their EP ‘Down’ at the end of January, featuring the tracks “From Beyond,” “Mydriasis,” and “Thoroughbred”. As described by Adelaide, “Down is very bloody and dark sounding, opposed to the possibility of our next EP which will be quite golden. Our sound changes a lot”. The fluidity of Milpool’s sound creates a space to become more experimental. As Tom says, “We’re all getting a lot better at playing our instruments. It’s more technical, natural and palatable. When we started we thought every song should be in a different tuning and a different time; it was so obvious and forced, but now it comes together naturally”.

For Adelaide, being a part of Milpool has increased her self-confidence. “Milpool is my first ever band, and it’s been life-changing for me. I’ve had a lot of women come to me and say seeing you as a female front singer is inspiring. I’ve talked to three girls who are starting their own band because of me, which is amazing to see. Seeing you come from opera to this and thrive in this environment inspires us to thrive too which is so moving for me.”

However, the future for Milpool is short as Tom is leaving the country in May. Before their eventual break, they plan to record and release two more EPs, and play more shows. “Hopefully I’ll go away for a bit, break up, and people will start to miss us, so we can build more hype for when we get back together,” Tom says. But for now, they will continue to play shows and release more music in the upcoming months.

You can listen to Milpool on Bandcamp and Spotify, and check out their Facebook page for when they’re playing next.