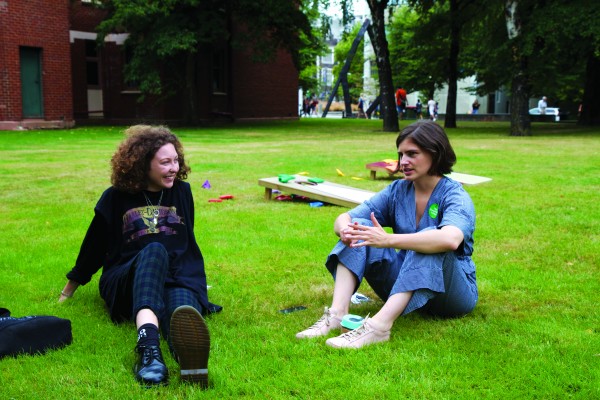 A Non-Political Chat with Chlöe Swarbrick

Chlöe Swarbrick – Green MP, advocate for mental health and drug reform, and just a great chat. Chlöe’s rise to fame came after she came third in the 2016 Auckland mayoral election. Following this, Chlöe began to work for the Green Party, becoming the youngest MP in New Zealand in the past 40 years. Chlöe works as the spokesperson for sensible drug law reform, mental health, education and much more in parliament, with the goal to help change New Zealand for the better. But you know, being a politician and all means you are constantly bombarded with hard-hitting, serious journalist questions. So here’s a non-political interview with Chlöe Swarbrick.

Who’s your favourite musician at the moment?

I was listening a lot to King Princess on the plane, they’re so sick. My partner just brought Marlon Williams’ newest album on vinyl so I’ve been listening to a lot of that, he’s really cool. Forever and always Frank Ocean is what I go back to. I’ve been having a renaissance on the plane when I’ve ended listening to Panic! at the Disco, like old Panic. It takes me back to being 16.

Who do you think would win in a fight between Jim Carrey and Adam Sandler?

Jim Carrey. When I was in intermediate and 50 First Dates came out, I watched it so many times with my little sister so that’s my image of Adam Sandler. Jim Carrey seems more buff. I think he’d win.

What’s your most embarrassing moment?

I’ve got quite a few. The thing that just came to mind was when I was at bFM and it was during the Obama years. We had an international correspondent Jason, who is now the head political editor at Buzzfeed, and I was talking about Obama and all the stuff that was happening in Iraq and Iran in the Middle East and I accidentally called Obama ‘Osama’ live on air. So that was cool, and so I had to obviously undo that. I immediately was like ‘What have I done. That was a mistake’.

I’ve started really loving the ‘my dude’ thing because I think it’s really funny. I think that me and my friends developed a meme by calling everybody ‘old mate’. I used to love the ‘Scumbag Steve’ ones, and I used to love Pepe but now he’s a right wing representative.a

What’s your favourite flavour of shapes?

I’m a vegetarian now, but it was cheese and bacon. Growing up I loved the little chicken ones shaped like drumsticks.

What’s your hype up song?

It’s really not a hype up song, but it’s funny because I think it’s more about the associations you connect to music. I listened to Frank Ocean’s Blonde during the 2016 mayoral election when I had to go all around Auckland all by myself; I listened to that album on repeat. “Nights” is the song if I want to be in a good headspace or be reflective.

What’s your favourite kind of dog?

Sausage dog. Dachshund without a doubt. The average dachshund doesn’t have a particularly great personality but I remain convinced that you would be able to train them and love them like a child and develop personality traits.

What do you put on your toast?

What’s your favourite day of the week?

All days kinda meld into one, right. You typically see the weekend as you lose formality and there’s not such a constrictive schedule. I really like Mondays. When parliament is sitting for a week they don’t sit on Mondays, so what I was doing all of last year and will be doing this year, is up in Auckland there are two housing youth suppliers called Lifewise and so I was working for three hours on Lifewise every Monday and then fly to Wellington that evening. I like that I can spend my Mondays doing meaningful community engagement.

It’s probably a situational thing. It’s probably hitting all the notes of being in bed, eating either pizza or a burger, and watching something on Netflix. I had a week to do that when I had the first real break over summer and it was amazing. The notion of taking time off felt like such a guilty pleasure itself, and adding eating food that isn’t good for you and watching Netflix was awesome.

Probably the one I use the most, which is fuck.

Sporty Spice, but what is she doing now?