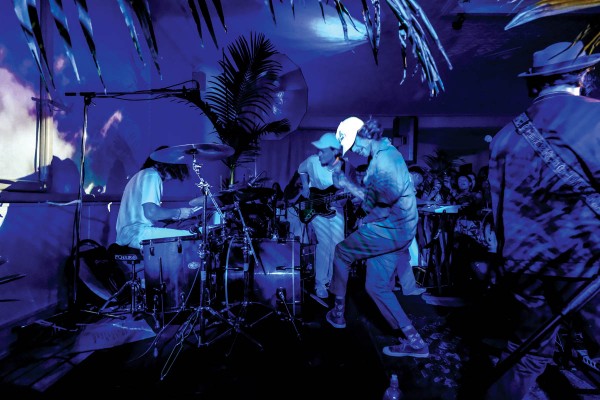 The Shambles: For the Last Time

The announcement that homegrown Dunedin band The Shambles are breaking up came as a shock to many people, but lead singer Max Gunn told Critic it’s an exciting evolution in the musicians’ careers.

“The band is breaking up for very positive reasons,” said Max. “There’s no dramas, no one is slamming doors or sleeping with each other’s partners.” Rather, “we’ve all been blessed with incredible opportunities in different places and the timing feels right to pursue them,” he said.

“It’s an incredibly hard thing to do as the band has been a massive part of my life and I’ve put so much love and energy into it. You become very close with everyone because making and performing music is a very intimate process.”

Since the release of their album Hungry Planet in 2016, The Shambles have been an essential part of the Dunedin music scene and numerous bands with similar sounds have sprung up in Dunedin and Christchurch, like Marlin’s Dreaming, Soaked Oats, Mako Road, and The Butlers. Many are managed by BirdsNest studio, which put together Nest Fest, a festival in the Hawkes Bay in January.

Max said being part of the rise of these independent bands has been the “biggest pleasure” of making The Shambles. “Looking at the Nest Fest line-up and seeing bands that didn’t exist four years ago and are really excelling at what they’re doing, that’s was super fulfilling.” It’s an “awesome cloud to be on”.

He feels a sense that independent bands can “do it now”. “If you’re in a band and you’re enjoying making music, just go and make a cheap crappy recording and release it and book a few shows.” “It can be a daunting thing when you have no fan base and no one’s heard a song of yours, but once you say ‘let’s give this a go’ it slowly becomes easier and you see that it’s not so hard to ring a venue and book a show or a studio to arrange a day’s recording. You progress and learn from actually giving things a go.”

The Shambles has been Max Gunn’s main project for the whole time he’s been a career musician. He said it “encapsulates a beautiful adolescence of mine, musically, artistically and as a person, but I’m ready to evolve and transform a little bit”. He had to remain “semi-tight-lipped” about the details of what’s next, but confirmed he’s working on a debut solo album. “I have an incredible team around me who are opening some really special doors. This year will be a massive creative time for me personally. I have a really good feeling about it.”

When Critic spoke to Max last year he said The Shambles had been working on an album, but it was not released. Their last single dropped in February 2019. But, he assures fans that the “song-writing will be used”. Developing that album to the “next level” production standard they wanted “got cut short” when the band decided to move in different directions. It “wasn’t a waste of time,” he said. It was played at festival shows throughout the summer and will be used in the future.

He called their ‘For The Last Time’ tour a “bittersweet symphony,” but said they were “excited to finish in song”. The “last last” show is at Auckland’s Mercury Theatre, where Max said his “grandparents watched shows when they were young”. It’s “fittingly significant” and will be a “special finale to a special finale tour”. They wanted to “finish emphatically with an exclamation mark rather than fizzling out”.