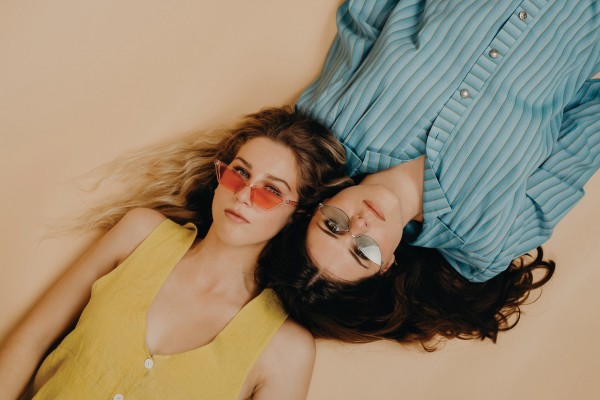 The All-Girl Band Making Waves in the New Dunedin Sound

Lacuna consisted of three (now two), musicians Mackenzie Hollebon, Bexy Shingleton, and Grace Cook, who has recently left. After a short hiatus from their previous band The Burps, the girls returned to each other, forming Lacuna. After countless gigs in Dunedin, they are ready to release an EP and a music video.

Mackenzie and Bexy met when Mackenzie was the drummer for Albion Place.

“One night we were playing with Hot Donnas and Bexy sung a lot of their songs with them,” Mackenzie said. “We were both really drunk and started drumming on the table with drum sticks and we almost got kicked out. Bit of a blur, but we exchanged numbers.”

They kept organizing to jam but it wasn’t until March in 2017 that the artists merged.

Bexy knew Grace from Bayfield and dug her style as a bass player. The group eventually got themselves drunk enough to battle the nerves and have their first jams together.

“Oh god we sound like alcoholics,” Mackenzie laughed, explaining the early days, “but it was just those times to loosen up. Bexy wrote the bass to some songs in that first meet up, and Grace and I played over top. Turns out we still play those first few songs at gigs today.”

Lacuna was a fluid unit from the start.

After the first jam last year it was evident the group had to take advantage of the chemistry they had together. Mackenzie and Bexy were both self-taught from early ages.

Mackenzie has been playing the drums for 7 years: “My dad played a lot of Led Zepplin and he just told me to improvise over their music which is kind of how I learned”.

“I’ve definitely learned a lot in terms of performing live,” Bexy said, “to this day I’m still asking Mak where the wires go and what needs to plug into what. But it’s all about confidence and I’m getting there.”

“We got another girl in – Jayde Medder – and we were called The Burps. But her sound was more punk rock from what we could all tell, so she went her way. She’s in Mary Berry now, they’re doing really well! We took a break for a while when Bexy moved to Perth with her parents.”

When she returned, The Burps had split, and it was time for a fresh start.

The women renamed themselves Lacuna. It means an unfilled space, and it also sounds feminine according to the band, which makes sense with what the group is trying to do, filling a space in the music scene.

So let’s state the obvious: Lacuna is a band consisting of women in a genre dominated by lads. An ‘all girl band’ so to speak. But the artists have expressed their frustration with this title.

“It should be irrelevant, but the fact that it’s still relevant really says something.”

“When I was in Albion Place I had some really shitty experiences,” Mackenzie said, “from people subconsciously treating me like I can’t play the drums and don’t know how to work with them. The band members were really supportive though.”

Lacuna have had a load of support from other bands in Dunedin; even before they’d released anything Marlin’s Dreaming had asked them to play a gig.

“Most of the boy bands have asked us to play… Soaked Oats, Mild Orange, all are really supportive!”

Mackenzie had been in bands before, whereas Bexy found herself unfamiliar with the territory. The band is very aware of the vulnerability that comes with putting your music out there: “You definitely have to wear your heart on your sleeve.”

Lacuna have developed their own sound, and are currently working on an EP and music video.

“We’re really excited to get the promo and EP done so we can actually work more on developing our sound.”

“There’s a lot of Dunedin influence in our sound because we are exposed to it 24/7, and there’s also an indie-pop vibe as well as Rex Orange County and Kali Uchis inspirations.”

Now that Grace has left, Bexy and Mackenzie are a two person band who work very well together.

“Grace is just on her journey as we all are. We’re dipping our toes in, and you need to try different things and work with different people to find your mould.”

Lacuna will be playing on the 12thof October for the Final Froth, and you can expect to have their music in your library this month. The band will also be performing at next year’s Toga Party.