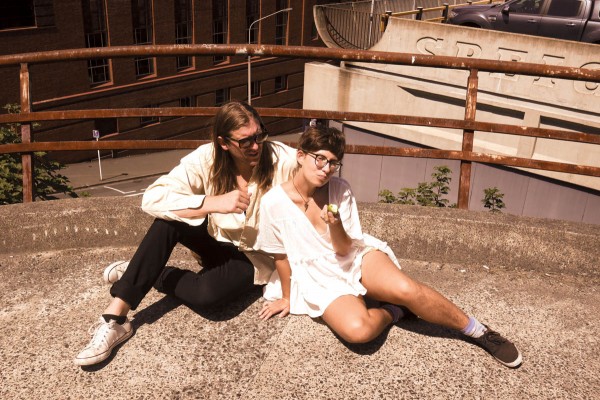 Jaggers X Lines are a couple of alt-pop weirdos from Dunedin who started making music together in early 2017. Made up of vocalist Eliana Gray and producer Morgan Smillie, they released their  first EP, Letters, after after just two weeks of jamming together.

Following this,the band birthed an array of singles such as Come to Rest, the catchy Slipstream, the bitter sweet Problem Drinking, and the truly addictive, smoky sounding Soft Little Lights.

I nestled down for a coffee with lead singer Eliana Gray and listened to her journey through music.

Eliana started making music as a kid, through musical theatre and school choir.

"It never really occurred to me that I could be a musician. I started learning guitar when I was 15, but a lot of my good friends at the time who were white cis dudes also played the guitar and were quite a bit better than me, and because I knew that I would never be able to catch up to their level I stopped… which is shitty… but that was my decision I guess.”

It wasn’t until moving down to Dunedin that Gray realised she had a sense of knowing it was something she wanted to do, but didn’t yet feel she had a right to take up that space.

“I didn't think it was something I could do, even though I innately knew that I could.”

“After that I was like… fuck it. I started introducing myself to people as a musician.”

Eliana was asked to play in a bar on her travels and started singing Fleetwood Mac covers, which gave her confidence. When she returned to New Zealand she went straight to her friend Nicolai and the two started their first band, Terrified.

“We recorded three songs in a night… they’re terrible recordings… we were blind drunk, but I still love them.”

“At that point music had given me so much joy, because Terrified wasn’t happening so much anymore I got scared that that was my only creative outlet, that I couldn’t make anything else unless it was with Terrified.”

Insert Morgan here. Morgan is a DJ and producer who studied music at Otago University.

“The sound we made together was completely different to what I made with Terrified,” Eliana explained. “We work quite similarly in Jaggers X Lines and Morgan’s record collection is the backbone of our band, the samples merge together so well.”

Eliana felt she could make the kind of music with Morgan that she couldn't make with anyone else. The duo pushed each other in surprising and fun ways. Gray developed a distinct performance style, and her voice has developed over time. The group has also learned a great deal about tour booking and managing the band.

When asked about the Ōtepoti music scene, Gray believes it’s very diverse, and ever changing. “Same with the NZ music scene there is so much music coming out of Aotearoa that I think is the absolute best! The Beths, Being, Randa, Pickle Darling, Siobahn Sainte, Laura Lee Lovely, Astro Children, Nakita I could just keep going forever!”

We aren’t perfect though, and Gray knows it:

“Like all communities we need to keep working together and on ourselves to unlearn the bullshit from the colonial, patriarchal society we've been raised in and get better at not being assholes to each other. Also no all dude line ups and more all ages gigs. And more sober gigs.”

Their achievements stretch for miles. In such a short amount of time, they have done a national tour already, released a single in Pōneke, played a New Year's festival in Golden Bay, played double whammy fest in Tāmaki Makaurau, released many singles and a music video, opened for Tash Sultanain Dunedin, played a bunch of dreamy Ōtepoti gigs, showcased at Going Global Presents, and recorded analbum. So! Many! Things!

Their next album, Burn Cycle, will be released on the 5thof October.