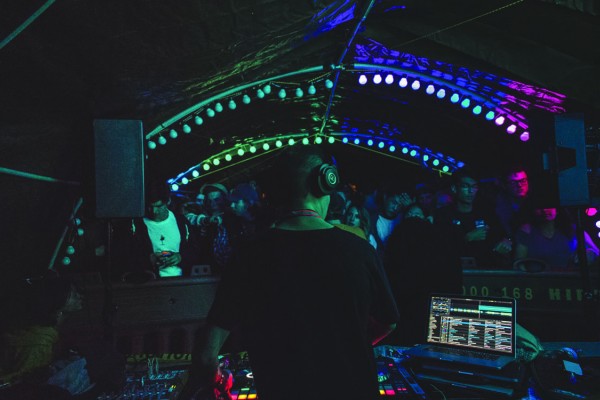 Breakaway is a collective lovingly put together by four creative individuals who are dedicated to putting on festival-spec parties and shows in Dunedin backyards, clubs, and renegade venues.

Born from the ashes of their dissatisfaction with Dunedin's nightlife, at their last big party somebody described the atmosphere as being “what they thought partying at University would be like”.

Every kid grows up expecting smoke and lasers, flashing lights and pumping dancefloors. People were disappointed with the disconnection between expectations and reality – Breakaway didn’t want to stand around and compete over who could down the most booze as a distorted speaker blasts Spotify. They wanted more.  All four members are incredibly passionate about gigs, and have a perfectly overlapping skill set (from music to tech); it was only natural that they try to bridge the gap between expectation and reality.

They were (and still are) worried about a number of concerning factors surrounding Dunedin’s nightlife - particularly how normalised and accepted antisocial behaviour is in the context of our binge-drinking culture, but also how measures to curb the binge-drinking culture are affecting party people as a whole. They agreed that downing a 12 pack of Diesel and jumping on somebody’s car is behaviour that shouldn’t be tolerated, but equally they didn’t like how so many attempts by students to organise proper parties got instantly squashed no matter the level of organisation. Breakaway saw it as possible to strike a healthy balance between the always-present desire of young people to have a good time, and the good of the community at large.

“We feel like right now Dunedin’s party culture focuses heavily on intoxication over fun. We want to change that. We’re not against alcohol, we are more just concerned with the manner its consumed.”

One of the main catalysts for changing this culture is accessible, high-quality events, which is where they step in. A lot of love goes into carefully curated shows. People respect the quality, and effort put in to lighting, and the difference in vibe is easy to notice at Breakaway parties.

“We also selfishly like to think that we have the highest quality mixing in Dunedin at our parties. We think that if you’re DJing at an event, you have a responsibility to the crowd to give them the highest quality performance you can – the focus should be on the people on the dancefloor, not having your own personal party in the DJ booth.”

They make sure that everyone who jumps on the decks at a Breakaway event is sober enough to give it their best – enjoying a drink or two behind the decks, without being so drunk the mixing takes a hit and ruins the vibes.

Their most recent party was a rave in a secret industrial basement somewhere in Dunedin. These alcohol-free renegade raves are the main course on the Breakaway menu. Their first rave, Breakthrough, was out in the middle of a forest, so the gang thought they’d go with the polar opposite for Breakdown and try land a grimy inner-city venue. A few weeks were spent painstakingly converting what was a rundown, abandoned basement full of weird stuff, into their dream venue. They loaded the place up with an arsenal of heavy-hitting speakers and specially built lighting. On the night, the vibes were “absolutely unbeatable”.

“We want people to be instilled with a sense of awe when entering whatever venue we’re playing in.”

All of the lighting is constructed and programmed by Breakaway, which gives a lot of wiggle room to come up with some really boujee ideas and give smaller scale events a level of production that nobody else can.

They’re all life-long music lovers, so the music that is spun is vast. On usual nights, they play every genre they can, with a heavy focus on two favourites: trap and house. Generally, they try to stay away from playing too much drum and bass, as that already has a powerful representation amongst students. Breakaway encourages DJs to express themselves through the music they play, which always leads to beautiful and unique genre-bending sets.

Breakaway looks to highlight the effects our binge drinking culture has on so many people.

“Lots of senseless shit goes on in Dunedin that gets just passed over because ‘lol I was wasted’. Fighting, destroying somebody’s flat, grabbing at people without their consent – being drunk shouldn’t normalize any of those things, but all too often it does.”

Breakaway is cracking it. The artists they currently have on their radar for booking include Haan808, QUIX, T1r, Jeddy Beats, CORTR, Montell2099, Ian Munro, ScarfE, VINE, BLANC, the list goes on.

Their next step is scaling their events up.

“We have nailed the formula for small to medium parties but we always want to do bigger and better things.”

They’re hoping for a Breakaway feature slot at a stage at RnV or RnA – anyone who’s been in Dunedin over the summer knows how dead the city is over that time.

Aside from that, they seem to be happy just doing what they're doing – as long as people keep dancing at their parties, they’ll keep throwing them!