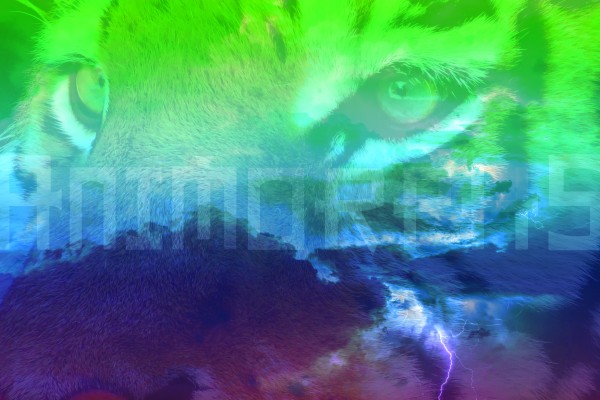 Animorphs is a *children’s* book series by K. A. Applegate about a group of teenagers who learn about a parasitic alien race, the Yeerks, secretly taking over the earth and simultaneously gain the ability to ‘morph’ from a different alien race, the Andalites, who do not like the Yeerks. Morphing is the ability to turn into any creature you touch, although for a maximum of two hours at a time. The group, the Animorphs, become guerilla (and gorilla) resistance fighters against the Yeerk invasion.

When I was a child I got into Animorphs in a big way. I ordered every one individually into our community library, pissing off a lot of librarians in the process.

One of the things I remember liking most about Animorphs, was that while everyone assumes they’re for small kids, they’re incredibly dark. Also, because they look trashy no adult is going to read them to tell you you shouldn't be.

I always remember them fondly. So, when I saw someone selling their entire Animorphs collection on Trade Me for $100, I bought it up, lickety-split.

I then read the entire series over the course of five harrowing days. I learnt two things. One: Animorphs is amazing. Two: Animorphs is fucked.

Note: I will not be reading the ‘companion’ books, like Alternamorphs or Megamorphs, because they are stupid and not canon and we should all forget they ever existed.

Ok, this is very nineties. Also, the whole first-person ‘talking to the reader’ thing at the start of each book is pretty cringe.

Also I can’t stop reading them.

I remember Animorphs being fairly traumatic, but kind of thought the traumatic stuff would ease its way in as the books progress. Apparently not. In the first few books Tobias stays in morph for longer than the two-hour limit and is stuck forever as a red-tailed hawk. He tries to still live with humans for a while but his hawk instincts overpower him and he kills a mouse and eats its fresh corpse in graphic detail, which fucks him up. He tries unsuccessfully to commit suicide.

Oh, and then he’s torn between a hot lady hawk that his hawk body totally wants to fuck and the ethical implications of bestiality. It all works out in the end though because the lady hawk is killed before he can fuck her. This is literally the third book. It only gets worse.

Like in the sixth book, when Jake gets infested by a Yeerk, which are grey-green slugs that crawl in through the ear and wrap themselves around your brain and we go through the first person horror of Jake being trapped within his own mind watching helplessly as his body is controlled by an alien being that taunts him and then the slow, agonising pain of starving the Yeerk out.

In non-nightmare news, Ax, the stranded Andolite youth the Animorphs rescue from a crashed spaceship, is a delight. His normal form doesn’t have a mouth, so when he morphs human he just runs around eating things and making weird sounds. Genius. Of course, he also has some fucked views, like absolute devotion to Jake, his “Prince,” and a tendency to disregard civilian casualties as inevitable. He’s still the coolest Animorph though.

The constant killing and horrors are starting to mess the Animorphs up way more than I remember.

Cassie, objectively the nicest and also most annoying character, tries to reject the Animorphs’ increasingly cruel methods. In Book 16 there’s a cannibal Yeerk serial killer, who survives by kidnapping humans infested with Yeerks, splitting the hosts’ heads open, and feeding on the Yeerks inside. The Animorphs decide to let him go, because he’s killing Yeerks, even though he’s also killing people in the process. Cassie is the only one who’s not just fine with it.

While Cassie is just generally annoying, the most annoying thing about her is that she’s kind of right; the Animorphs do horrible things, even if they’re ‘justified’. The Yeerks are literally just trying to survive, and so are the Animorphs. Shit’s fucked.

Animorphs is also more weirdly funny than I remember. The unusually PC ‘90s youth banter is sometimes actually funny, although painfully ‘90s in some of its gender stereotypes. It also reads in places like a middle aged person trying really hard to imitate what ‘kids’ talk like by only watching ‘90s highschool movies. It’s fantastic.

Most of the books I read today weren’t the best. The series seems to be slowing down a bit, with a lot of random books where they go to a specific location, like an animal testing facility or the North Pole, and then return without advancing the story.

Also, the Helmacron books are stupid. Being shrunk down to microscopic size and having to battle your way through a human’s anatomy is far too educational. What is this, the Magic School Bus?

The exception is the David trilogy. Basically the Animorphs try to increase their ranks by giving a random guy from their high school morphing powers. He turns out to be even more of a sociopath than the regular Animorphs and tries to kill them all, completely disemboweling Jake in tiger morph and leaving him to bleed to death. Following some excellent twists and counter twists, David is eventually trapped forever in the body of a rat and left to live on a tiny island in the middle of the sea. Boats passing by months later could still hear him mind-screaming.

At the end of today I took a long cold shower. I thought about how the painful cold was nothing compared to the Animorphs’ pain. About how nothing in my experience, nothing I could conceive, compares to the horrors of war. About the cage of trauma and the smothering blanket of guilt. Today was not a good day.

Book 33 is officially the most fucked book so far. The whole book is literally just Tobias in a tiny cage getting graphically tortured. He’s hooked up to a machine that controls the parts of the brain that induce pain and pleasure and almost goes insane/dies after receiving heightened, alternating doses of painful and pleasant sensations and memories.

The thing is, Tobias doesn’t get over his torture. He’s able to function in later books, but he’s never able to overcome the experience and it haunts him for the rest of the series.

I didn’t think it could get worse. It got worse. The Animorphs create more Animorphs from disabled children, only to have Jake knowingly sacrifice all seventeen of them to achieve his goals.

Also, David comes back in his rat body and begs to be killed, which Rachel does. She just straight-up murders him. By this point it’s been confirmed, Rachel is a violent psychopath. She just straight up enjoys killing. At the start of the series it’s just played off as a love of excitement. As the series goes on you start to realise that no, she just loves killing things.

As a child I was always too scared to read the last book. Mainly because it was an easy way of making sure the story never ended, but also because the cover inscription on the final book was "It began with six. It will end with five..." and I didn’t want any of them to die.

It’s Rachel. Rachel dies. She volunteers for a suicide mission because she knows that, if the war ends, she will not be able to return to normal life.

What are you doing to me, Animorphs?

Comparatively, Rachel kind of comes out of the war pretty well; Jake, who was so competent during it, becomes completely useless; Tobias just fucks off and reverts to being a hawk because it’s way better than being who he was.

A lot of people didn’t like the ending. K. A. Applegate responded:

“Animorphs was always a war story. Wars don't end happily. Not ever. Often relationships that were central during war, dissolve during peace. Some people who were brave and fearless in war are unable to handle peace, feel disconnected and confused. Other times people in war make the move to peace very easily. Always people die in wars. And always people are left shattered by the loss of loved ones.”

In the end, Animorphs is goofy, inconsistent, and absolutely soul-destroying. It’s also one of the greatest examples of children’s literature in the history of the world. K.A. Applegate (and all your ghostwriters) I salute you.

“I felt my throat tighten and constrict. My hearts ached with a pain I could not describe. I wondered if I were dying. I felt not sadness. I felt pity. For myself. For us all. We were children no longer. And we never would be again." – Ax